You don’t often hear the term “greenbelt” when it comes to Dallas neighborhoods. Lochwood residents can’t talk about their ’hood without mentioning it. Located near White Rock Lake, most homes here were built in the ’60s; a handful of homes were added to the neighborhood in the ’80s. The homes, which have maintained value even in this difficult economy, vary from traditional ranch to two-story colonials and midcentury modern.  Although most families here send their children to private schools, the local public elementary, M.T. Reilly Elementary, is making a comeback. The diverse neighborhood has a common draw for many of its residents, including Karen Winn: “It reminds me of the neighborhood I grew up in, ” she says.

Location: Bordered to the north by Northwest Highway, to the south by Garland Road, the west by East Lake Highlands Drive and Easton
Road, and the east by Jupiter Road. 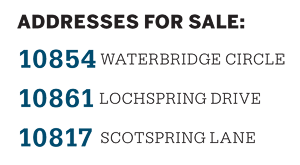 Where to go: Residents are thrilled the local Kroger now sells beer and wine, a change in Texas’ wacky wet/dry liquor laws that is drawing more cool places to the area. A modern branch of the Dallas Public Library opened in the fall of 2009, giving families another bike-to destination. Tony’s Pasta & Pizza is a nearby institution (as is evidenced by the out-the-door line every Friday night); Go 4 It Sports Grill also gets good early reviews. Other favorites include Good 2 Go Taco (it closes at 3 p.m., so plan your taco run accordingly), Goodfriend Beer Garden, TC Shaved Ice, Casa Linda Bakery, and Tukta Thai. The nearby White Rock Local Market runs a farmers’ market the second and fourth Saturdays of every month in the Green Spot parking lot. Locals with a sweet tooth head to Cheesecake Love and the Cake Ball Company (which recently was featured in The Wall Street Journal).
Why Lochwood: Although the  prospect of bumping into wild animals on the way to the car may be unsettling, residents love living in a nature-like setting. “We have coyotes, raccoons, and all kinds of other wildlife,” resident Lisa Martin says. Many of the neighborhood’s original residents still live here, says local real estate agent and long-time resident Ronda Hardt. And many who lived here as children are coming back. “So many people aren’t aware we’re here because we’re buffered by the trees,” Hardt says. “But once they discover us, they’re moving here for the way the neighborhood looks and for the prices and character.”