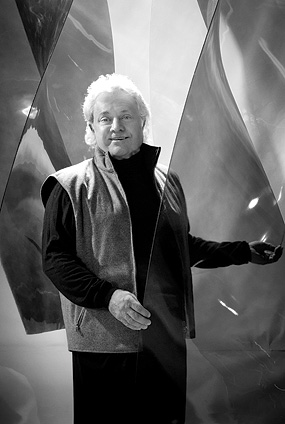 “I love to cook and prefer five-course dinners—just because the presentation is the most important part to me. My first menu decision is always the garnish.” –Stephen Stefanou photography by Timothy Kolk
photography by Timothy Kolk
Stephen Stefanou makes the impossible possible for a living. He designs spectacular sets all over the world. Perhaps you’ve seen his work? He created the iconic Rockefeller Center Christmas display in New York. He is responsible for the Conservatory at the Bellagio Hotel in Las Vegas, where 18-foot synthetic glass poppies with water fountains create an Alice in Wonderland effect. For the 2010 Vancouver Winter Olympics, he created a 46,000-square-foot cranberry bog in the shape of the Olympic logo. He’s currently working on a 100-foot-tall water clock obelisk sheathed in rock crystal. It will be the largest architectural structure in the world.

When he’s not performing super-human feats at work, Stefanou resides in a high-rise on tree-lined Maple Avenue, where he has lived for 35 years. Although business travel accounts for 75 percent of his time, when he is here, he’s quite content living in the rather old-fashioned grande dame building favored by some local high-rise society. “I have a killer view that’s not going to change. And this is like four-star hotel living. If there’s a leak, it’s fixed. If there’s a bulb out, it’s replaced before I get home,” Stefanou says. “They have 32 people here on staff—not a lonely concierge.”

So why is he considering moving out for two whole years? The answer: feng shui.

Feng shui is the ancient Chinese system of aligning the flow of energy, and it’s still rigidly adhered to in the Far East. In fact, it is an important tenet of Chinese architectural law that a building is designed according to strict feng shui principles and must fit into the existing community. It became trendy Stateside in the 1980s, in part because of a New York-based textile company. Those folks hired Stefanou for a magazine marketing piece that showed people how to shift the energy in a space using certain architectural elements and changing room placements. The piece was a huge hit, but most people considered feng shui a mere design trend—an amenity rather than a foundation. Not so, Stefanou.

Soon after this project, Stefanou’s assistant, Sue Tinkle, suggested that the energy in his office was stale. She tracked down local feng shui expert Karen Thompson, and the transformation began. Employees moved, walls were added, and furniture was shifted. And it paid off. Stefanou’s company won a $1 million sale, and he opted to bring the concept home.

And all has been well—until recently. Thompson had news, and it wasn’t great. She informed him that, because of the movement of the earth and planets, the energy in his apartment will not be aligned with his personal bagwa (life force) for the next two years. Therefore, she recommended he move to a different building, but he’s on the fence about that.

Lucky for us, he hasn’t started packing just yet. Stefanou’s crystals still emit positive energy. Amethyst, rock crystal, rose quartz, citrine, and Chinese Fluorite—big and small and all the colors of the earth—are prominently displayed. His fascination with crystals began in the late 1970s when he was hired by a Canadian developer to design commercial space in Dallas. The chairman wanted two huge sculptures in the lobby and outside. Unfortunately, the budget didn’t allow for monumental sculptures. So Stefanou found an 8,000- and 10,000-pound crystal in Arkansas and installed the pair in the lobby. When the building sold a few years later, the new owners weren’t feeling the crystals, so Stefanou reclaimed them. He donated one to the city of Dallas, and it is now showcased at Pegasus Plaza on Main Street. He also began dealing crystals, selling to designers through the David Sutherland Showroom.

It will be hard to replicate this great space if Stefanou chooses to move. The 2,500-square-foot apartment flows quite well for entertaining. Even the guest bedroom can become an extension of the living room. “When I entertain, sometimes 80 or more people are here, and I move the bed to a storage unit on another floor and bring up a bar for serving where the bed was,” he says. “I dim the lights in the den so that the glowing crystals create a wonderful sensual, sort of Buddha Bar atmosphere.”

And yet privacy is not an issue. With the touch of a button, a grass-cloth-covered wall closes off the master bedroom, another wall closes the second bedroom, and a Murphy bed drops to make room for a weary guest. Stefanou is a magician after all. It only makes sense that his space would be enchanted. Who knows what surprises will unfold for him in the next two years, but count on Stefanou being in a good place.