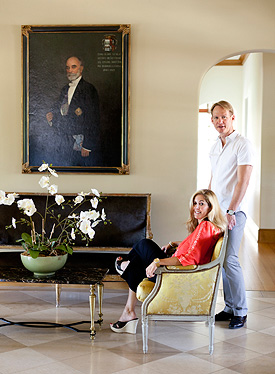 Designer Eric Prokesh and homeowner Carla Lyon lounge in the formal entry of her Bluffview home. The Marquis chair is from John Gregory Studios Gallery and is covered in Saint Simon from Old World Weavers. The early Empire (circa 1800) settee and Bagues table are from Eric Prokesh. The portrait is Lyon’s great-great-great-grandfather. photography by Stephen Karlisch
photography by Stephen Karlisch
Somewhere along the way, “This doesn’t feel like Dallas” became the ultimate compliment one could bestow on a person, place, or thing in Dallas. Who knows what exactly that says about us as a people? That’s another story—a D Magazine story, perhaps. Deep questions aside, it’s safe to say that the Bluffview neighborhood doesn’t feel like it’s in Dallas. Unlike the Park Cities, the lots here are large enough for the houses to sit back a bit and breathe. And unlike Preston Hollow, elaborate gates aren’t necessary to keep residents in and nonresidents out. It feels 10 degrees cooler here thanks to the shade supplied by plentiful trees, and the narrow and meandering roads are perfect for a leisurely stroll. Sure, one could argue those roads are less quaint when there are actually cars on them. And, okay, the schools maybe aren’t the best. Mosquitoes might even be a problem. But aesthetically speaking, Bluffview is pretty perfect.

So it’s little wonder that when Carla and Edwin Lyon decided to build a new home in 2001, they opted to do so in Bluffview. Carla Lyon worked closely with architect Richard Drummond Davis. Once construction was complete, Lyon began working with John Gregory to furnish the place. Gregory’s eponymous showroom in the Design District is noted for the incredible treasures he offers clients. Not long after, Gregory brought in friend and designer Eric Prokesh to team up on the design. “We all worked together pretty closely,” Prokesh says. “Carla has very definite taste, but it’s almost easier to work with someone who has strong taste than it is to work with someone who doesn’t know what she wants. Installation happened very quickly.”

For inspiration, Lyon looked to the houses of Florida (she and her family spend a great deal of time in Miami) and American Mediterranean, along with elements of her Cuban ancestry. The result is a wonderfully eclectic array of rooms that vary in style—sometimes quite dramatically—throughout. In less confident hands, it could be a disaster, but the result here is a delight. An ultra-formal entry coexists nicely with a more modern family room influenced by Hispano-Moorish details. “Each room is given its appropriate kind of tone,” Prokesh says. “The front hall is the most formal area. Some of the best antiques are in there—it’s very traditional. The family room is more relaxed and modern.” Upstairs, the teenage girls’ rooms are bright and fun and colorful. How colorful? Lilly Pulitzer could set up shop here and feel right at home. But it all works. “A contrast can be safe and fun,” Prokesh says.

Prokesh and Gregory started from scratch in some rooms—namely the entry and the family room—while Lyon took on her daughters’ rooms herself. And even though, before our photo shoot, Prokesh hadn’t been back in nearly seven years, he still has fond memories of the time he spent there. “It’s really great when your client appreciates your best stuff,” he says. “And some of my best stuff I’ve ever had is in that house. She chose those pieces.” (This is probably a good time to mention that Prokesh will be opening a new storefront in the next few months. We’ll keep you posted.)

And that’s how we would have liked to end this story. But we can’t not mention the explosion.

At the beginning of the long, hot summer, the D Home editors scouted the Lyon house. We immediately fell in love with it and scheduled a photo shoot. And that’s when the curses—and possible cursing—began. One particularly hot July day—the day before we were scheduled to photograph the Lyon residence—a transformer exploded in their backyard. This resulted in a fire that partially destroyed their fence and yard. Luckily, they were able to extinguish it before it could cause damage to the house, and no one was injured.

Most people would freak out or, at the very least, ask us to reschedule. Not so Carla Lyon. She was calm and cool and told us to come by as scheduled and proceed with the shoot the following day.

Two hours into the photo shoot, the electricity went out. Despite our prayers, chants, and finger crossing, the power refused to return. Having no light is a problem; having no air conditioning in July in Dallas is intolerable. So we had to reschedule. Lyon kindly agreed to host the sideshow again the following Monday.

After being foiled by transformers, explosions, fire, heat, and blackouts, we persevered. Even better, we had the opportunity to spend extra time with Lyon. We learned that she’s related to Spanish royalty. We heard stories about her great-great-great-grandfather, Count Rivero, whose portrait hangs in the entry. He lived in Havana and was the publisher of the oldest newspaper in the Western Hemisphere. We learned that she and her family can’t return to Cuba. And our style and design editor Peggy Levinson scored a free bracelet when she complimented the leather piece that Lyon was sporting.

The extra time also allowed Prokesh to reconnect with his client. “It was a good experience,” he says. “We’re all going to have dinner when Peggy gets back from vacation.” Lyon might want to leave the jewelry at home.