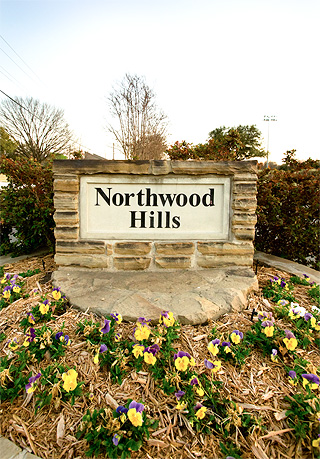 photography by Josh Martin
photography by Josh Martin
Some of Northwood Hills’ original residents remember when the area around this North Dallas suburb was all cotton fields and cattle, when Spring Valley Road didn’t go west of Hillcrest Road. Located in the heart of North Dallas, Northwood Hills residents can still hide away in a facade of rural life. They may live 10 minutes from the Galleria, but on their way to the mall they might pass a family of foxes, which calls one Northwood Hills deck home. It’s definitely a high-end neighborhood, but residents here seem to leave their pretense at the highway off-ramp.

Population: 1,200 homes (1,170 if you don’t count the duplexes along the northeastern part of the neighborhood, most of which aren’t occupied by homeowners).
Location: Northwood Hills is about two square miles in size, bordered on the north by Belt Line Road and to the south by Spring Valley Road, jetting down Hillcrest Road to Alpha Road. The western border is the floor plain for Kiowa and White Rock creeks, wriggling to the east up from Alpha Road to Far Hills Lane, following Carillon, Edgecrest, and Overview drives.

Average home price: $639,420 ($156.87 per square foot). Homes currently on the market range from $249,000 to $1.5 million.
Average lot size: Most homes here have half-acre lots, with some a bit smaller on the eastern side of the neighborhood.
Where to go: The proximity to Belt Line, restaurant row of North Dallas, offers neighborhood residents lots of dining options. Spring Creek Shopping Center is another neighborhood destination and is undergoing major renovations. The Galleria is a quick drive, and NorthPark isn’t too far away either. “This may be on the north side of LBJ, barely, but the mentality is pure Dallas,” resident Rebel Webster says.
Why Northwood Hills: “Northwood Hills has an intimate feel, as you might find in smaller neighborhoods,” says Webster, president of the Northwood Hills Homeowners Association.  Why? Webster thinks it’s because the neighborhood was developed in stages, starting in the late ’50s and going through the ’90s. Because of its more organic expansion, the neighborhood features a variety of home styles and more than its fair share of old oak trees. The homes range from ranch style to Cape Cod to teardowns-turned-McMansions (which some residents would rather not mention). One section along Westgate Drive, built in the 1990s, features homes individually designed by different architects. Real estate agent Judy Switzer moved here two decades ago, looking for a down-to-earth place to raise her kids. “They’re not keeping up with the Joneses here like in a lot of Dallas,” she says. “People are understated.”