Imagine visiting a hacienda. Now imagine it’s in Preston Hollow. You enter through the antique doors into an expansive room. It’s cool and dark­—you’ve managed to leave the punishing Dallas summer heat behind. You’re suddenly transported somewhere in the interior of Old Mexico. The stone walls of the house form a “U” shape around the courtyard. Unlike possibly every other house in Preston Hollow—even all of Dallas, perhaps­—the entry hall doesn’t contain the requisite round table with a large floral arrangement. Instead, it feels rather empty—as if waiting for the arrival of a large party. And that makes you happy, because this house feels as though it’s made for entertaining in the traditional Mexican way. Like at any given time, the dinner table could be set for 20, with mariachi bands playing and guests singing and dancing. This is the home—and the world—of Cristina and Harry Lynch. Cristina, along with her sister, well-known artisan Jan Barboglio, grew up in Torreon in the state of Chihuahua. She relocated to Dallas in the 1980s to join Jan, and the Barboglio sisters quickly took Dallas by storm with their white peasant dress collection. It was Jan who met designer Dan Nelson first, but soon, he became Cristina’s friend and decorator, too. They share an aesthetic, thanks in part to his professional background. Nelson spent time running Vision Design, the design branch of Rosewood Hotels & Resorts. After redecorating the Mansion on Turtle Creek in the early 1990s, he began traveling the world, working on projects in Little Dix Bay, Cabo San Lucas, and other locales. 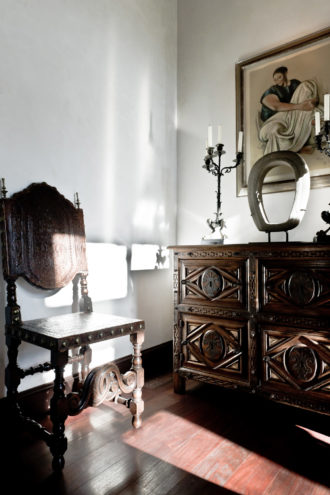 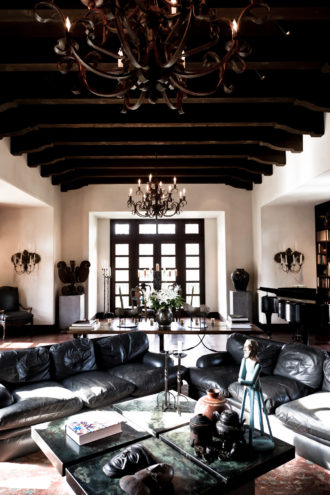 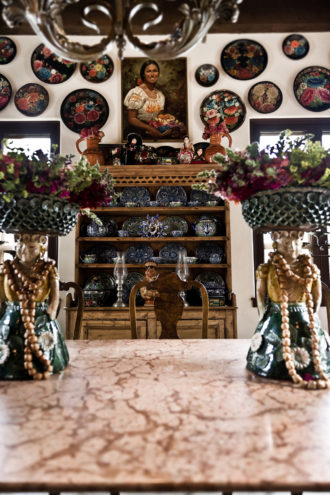 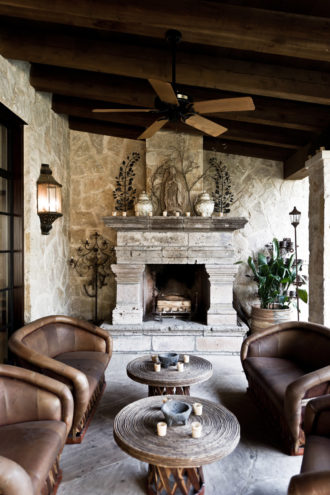 His exploration of Latin and tropical architecture and furniture sources in Mexico helped shape the Lynch project in Preston Hollow, which Cristina and Harry began building in 2001. Nelson sought out Frank Ryburn, an architect proficient in the art of Hispanic architecture. Ryburn also designed the doors and copper detailing on the roof and worked closely with Nelson to incorporate the heavily carved oak ceiling beams, cabinetry, and interior doors in the overall décor. The result is the perfect background for the impressive Mexican art collection the couple has amassed. They are such avid collectors, in fact, that an entire room of shelves is devoted to rotating collections. Pieces include paintings by well-known artists such as Pedro Diego Alvarado, grandson of Diego Rivera, and ceramics from the Jose Noe Suro collection in Guadalajara. Cristina happily explains the significance of certain pieces to visitors. “Dia de los Muertos is one of the most beautiful and sacred celebrations in Mexico, in which the living celebrate the memories of their ancestors and lost friends,” she says. “My favorite religious symbol is the Virgen de Guadalupe, who is seen today as the guiding religious figure in Mexico.” And she is even more enthusiastic about mariachis. “The mariachi figures are by Josefina Aguilar, the best-known living folkloric ceramicist in Mexico. And mariachi music is my favorite—my instructions are that there be mariachis playing upon my leaving this world so that I can take them with me to heaven.” The master bedroom is a wonderful retreat. The brass side tables are from the Nelson Line, and the linens are part of Cristina Lynch’s collection of traditional antique Mexican lace and embroidery.
Manny Rodriguez

“Cristina buys the art, and I do the furniture,” Nelson says. He went to work mixing furniture from J. Robert Scott and the Pace Collection with pieces he had made at factories in Guadalajara and Cuernavaca. There are touches of cultures from around the world—accents from Art of Old India on Dragon Street, a winged statue found in the Philippines, marble busts from Paris, and an old leather settee from Spain. That’s what makes the house feel so authentic. “The most elegant Mexican homes are an eclectic mix of American-made custom upholstery and furniture with European antiques and Mexican paintings—art that is sometimes disturbing with elements like skulls and crucifixion scenes that reflect the poignant history of Catholicism and suffering,” Nelson explains. All that and mariachis, of course.