Kari Schlegel fell in love with high-rise living during a brief stint in New York City, where she interned for Tory Burch. When she returned to Dallas in 2007, she had no interest in buying a house. She wanted a place at the W. Finding the right space wasn’t exactly tough—she’s a real estate agent at Allie Beth Allman & Associates, after all, and the 25-year-old socialite wasn’t bound by budget constraints that hinder most 20-somethings. She set her sights on a corner unit.

Then big brother Kirby complicated matters—as siblings so often do.

It turns out that Kirby wanted a place at the W, too. Dad stepped in and settled the matter. Pavestone founder and CEO Robert Schlegel decided that rather than purchase two units, it might be better to scoop up the penthouse shell available on the 29th floor. Sure, the space—12,200 square feet—was way too large for one kid (even for a Schlegel), but it was ideal for two. From there, Bob and wife Myrna approached renowned architect Lionel Morrison with the idea of creating two separate apartments dissected by a central “grand salon,” which would be ideal for entertaining.

The Schlegels called in Jan Showers to decorate. “Kari knew exactly what she wanted. She came to me with ideas from Domino, color schemes and all,” Showers says. “She was very focused. She knew she wanted lots of color, but she also wanted her home to be livable.”
Form meets function in the sophisticated living room that pops with colorful accents such as  yellow French Louis XVI chairs. “Kari loves yellow,” Showers explains. The space is inviting yet uncluttered—which is perfect because the entire project is perpetually on the market. (Price: $11.5 million.) But Kari’s lifestyle requires that she live in more than a pretty space. In addition to her real estate duties, she is also pursuing her MBA through SMU’s Professionals Program, which means she needs a place to study. No word on whether distraction by those spectacular views is causing any grade troubles. 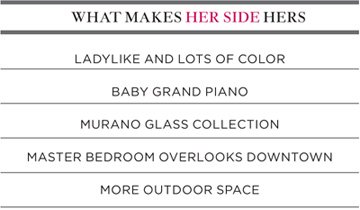 Kari also dons another hat: that of hostess. The lady likes to throw parties. Unfortunately, grad school has put a slight crimp in her social life. “No more Friday night parties,” she says. “I have class on Saturday mornings.” In addition to throwing fetes for worthy causes, Kari and her friends have also launched a dinner club, thanks in part to her newfound love for the kitchen. “It’s my favorite room in the house,” she says. She likes to bake, attempt stir-fry, and prepare hummus but says she probably prepares turkey chili  more than anything. Still, every new cook has the occasional disaster. “The best thing about living at Victory is that if one of my concoctions ends up getting trashed, I can still order room service,” she says, laughing.

Kari and her brother are tight, but even though they share a floor, they give  each other plenty of space. “When he’s in town, we see each other maybe once a day. We have breakfast together, or I see him when I use the exercise room,” she says. And living with a roommate—even when it’s in 12,000 square feet—is always an exercise in compromise. Kirby is not fond of dogs. (His  mother attributes this to the fact that he was bitten by a dog when he was about 3 years old.) But Kari insisted on having a pet. Kirby relented—after she promised to keep said pet confined to her side of the apartment. With time, Kirby has grown to tolerate—and even appreciate—her miniature pinscher Jack. “Kirby and Jack have totally become roommates,” Kari says with a laugh. “He realizes Jack is as protective of me as he is.” 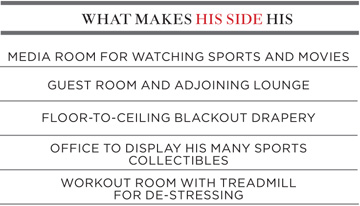 Kirby Schlegel likes sports. He owns Frisco’s Texas Tornado Hockey Club and the Triple A baseball team the Tacoma Rainiers. (Former boy bander and Jessica Simpson ex Nick Lachey is also an investor.) He regularly attends games at nearby American Airlines Center. Maybe if you’re lucky enough to sit in the good seats (or, rather, suites), you’ve even run into him at Cowboys Stadium.

You know what else Kirby likes? Entertaining. Lucky for him, his penthouse at the W makes it a snap to combine those two passions. He often opens up the common area for fundraising events—most recently for Haitians in need on behalf of AM Charities—by throwing parties before or after Stars and Mavericks games. He hosted a few events in honor of the NBA All-Star weekend. He often invites “top athletes and celebrities” over for a pre-game drink. (He’d rather not name names.) Suffice it to say, when he’s not on the road, Kirby has something fun going on. And his high-wattage—and athletic—guest lists call for a more masculine and crisp feel than Kari’s colorful, linear space.

It was a task Kirby quite happily left in Jan Showers’ able hands. “Kirby is not as into design as Kari is,” Showers says, laughing. “He’s a typical guy. He’s more into sports. While I met with Kari every week, Kirby just gave me some occasional input.” Showers set about adding more manly touches to his side, such as menswear fabrics on long, low sofas in the living room.

Let’s not forget Kirby also works. In addition to owning the above-mentioned teams, he is also CEO of Schlegel Sports. He offices at Victory Park, which makes for an easy commute. He finds it appealing that he can go an entire day or two without touching his car.

Business takes Kirby out of town two to three times per month, so high-rise living works well for his lifestyle. He appreciates the W’s excellent concierge service, and the property provides staff to maintain his condo during his extended absences. The additional amenities are just icing on the cake. “There’s a great gym and room service, which I order about three times a week,” he says. “And with Bliss Spa, it’s like having your home in a great hotel.” Even though sister Kari has the place on the market, he can’t imagine living anywhere else. And he’s not lining up movers and boxes just yet. The right buyer might be hard to come by—he admits that the design is unusual, but the space easily could be reconfigured. Also, there’s this: “I’ve never seen Kari show it,” he says, laughing. “She hasn’t shown it any time I’ve been in town.”