My house a half-hour from Dallas is so quiet you could write a book. I have. It’s so private you could walk around naked. I do. And it’s so peaceful: as day deepens to night, cows moo and low; coyotes stage a pep rally; crickets chirp; owls sing solo. The night sighs. Sleep is deep.
But at sunrise on an evil day one year ago, I awoke to the clattering diesel motor of a dirty yellow bulldozer. It was a Cat D5K, the XL model, I believe, with a 100-horsepower engine and a gross operating weight of 20,741 pounds. The Cat was pushing over every tree on the other side of my fence. I gave the operator my best what-the-hell look. He smoked a cigarette and ignored me.

I was about to get a neighbor, a completely unwelcome development made incalculably worse by his identity and by where he would plunk down his McMansion.

A little background: the first book I wrote in my house in the country sold so well I could pay cash for the beautiful 100 acres next door. But I didn’t own the land for long. Four years later, in 2000, my marriage fell apart. She got the acreage, I got the house. And I got screwed. The judge seemed at sea about how often one might write a best seller. He decided, apparently, that I could do it every year, and he based my monthly payment to my physician ex-wife on that. I wanted to knock on his head like knuckles rapping on a door. Hello?

A few years passed, and then the judge bought 10 acres of the land I once owned, the 10 acres next door to me. Then he pushed over the trees between us.

That a judge should acquire property from a divorce he had ruled on looked to me to be highly unethical. Is that supposed to be a perk of county judgeship—dibs on divided assets, including real estate? I asked around and found that His Honor had also acquired his spouse in roughly the same way: he had presided over the dissolution of her marriage. A friend at Fox 4 television in Dallas wanted to sic the station’s investigator on the case, but a lawyer friend from Fort Worth advised us to let it drop. “Stuff like this goes on all the time,” he said. “You may not like it, but it’s not illegal.”

After asking the great god in the sky what karmic wrong I had done to deserve this particular tree-hating neighbor, I began to re-establish the border. I transplanted cedars and oaks from elsewhere on my six-acre lot and imported red-tipped photinias and bamboo. But when the judge started construction I felt a cold rush to my head, like a precursor to fainting. On our rural road where the average distance between houses is about half a mile, the judge poured the slab for his garage 10 feet from my fence, and the pad for his house a few yards from that. Surely this is against the law, I muttered, and, still muttering, I called the zoning department at the county courthouse. The news was disappointing. Just about anything goes when the offending party’s parcel is composed of at least 10 acres, the clerk told me. But first she’d asked me for the address, and she’d said “oh, Judge (Somebody’s) house. ” I had complained about the boss to his secretary.

Lowe’s carries 16-foot-long treated pine four-by-fours. I bought 10 and buried them three feet in the ground, eight feet apart—hardly enough for the 200-yard fence I need, but a start. I haven’t had the funds to buy the lumber to complete this section of fence, so the lanky timbers just stand there, like so many upraised middle fingers. 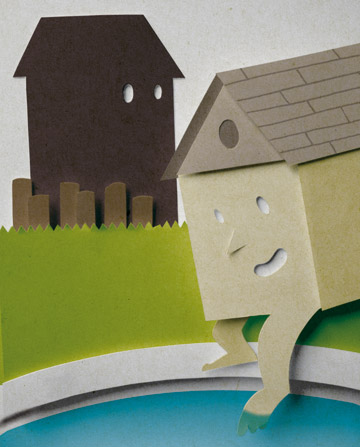 illustration by Maurizio Santucci "Bombo!"
illustration by Maurizio Santucci "Bombo!"
While my son and I were digging the holes and mixing the concrete for the wooden border, we looked up at casa de judge. Its architecture suggested Country French but evoked less a house than an ocean liner perched on top of a hill. With no effort made to blend into its surroundings, the erection seemed an adolescent monument to its owner. And why, I wondered for the umpteenth time, did they build so close to me? Perhaps they were trying to replicate the high-density suburb from which they came. Maybe it was a safety in proximity thing, like when you park in a lot far from all the other cars—the better to avoid door dings, whatever—and someone with a thousand other choices selects the space right next to you.

Anyway, the lovely couple was there this day, and they approached. Sometimes I think of them as the Whites: white house; three white cars, including a Jaguar; she always wears head-to-toe white. On this day she wanted to introduce us to the little longhaired yip-yap dog she was holding. It was white. “Better keep it in the house,” I said politely, knowing the four mutts that live with me would consider Fifi an amuse bouche, an hors d’oeuvre. I pictured the day I would have to return the possibly headless body in a shoebox. “I think your dog had a heart attack,” I would say.
My judge is a Republican, and he usually runs unopposed. I have no legal training, but for a while I spoke to friends about running against him in the next election, so I could inconvenience him and ask embarrassing questions in a debate. Such revenge fantasies have helped, and the bamboo is growing fast. But it’s not enough. Their cars are almost parked in my bedroom, and I can hear their voices.

So, while I try to grow up and accept my new reality, I’m left with little gestures. For example: the Whites were in their backyard the other day at the precise moment I wanted to take my usual short swim. They could see me: should I change my ritual and leave some clothes on? No. Should I bend over and touch my toes before diving in? Yes.

But if they looked, I doubt it was a problem—my neighbors and I are very close.