Lesson 1: You can find your dream house on Craigslist. 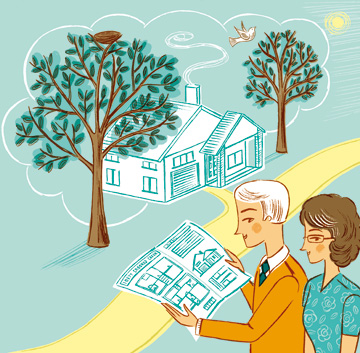 I walked through the double-carved mahogany front door and encountered a terrazzo floor, then some wood. And then I stopped dead in my tracks. Right in front of me was a kidney-shaped swimming pool just steps away from the front foyer—right in the center of the house.

This was an 8,000-square-foot house with only two bedrooms and a pool as the center focal point. Glass windows looked out onto the pool and bar, almost like a motel. No wonder the real estate agent had it on Craigslist. Who would want it? It turns out my husband, a man who swore we would never leave our Warrington condo, wanted it a lot.

He showed me around, one design disaster leading to another. The home was built in 1974 by William Buford of Texas Art Gallery. The second owner was a Dallas Cowboys player named Laroi Glover, who added his touches, like the mirrored ceiling in the wine cellar and the remodeled master bath with basketball-player-sized vanities.

Michael kept saying, “It’s such a deal!” All I could see was that it had to be gutted. But then Michael brought in architect Todd Hamilton. He sold me on the dream. We spent the next year going hog wild on plans.

I began to see how unbelievable the property was—almost three-quarters of an acre—with great, huge trees overlooking a creek.  We had been thinking about building a lake house or country home family compound, but then we realized how hard it would be for the Colorado and California families to get there. The whole point of this house—what Michael saw from the beginning—was that it could be our country house in Dallas. Walk through the door, you feel like you are on vacation. So we sold our condo in June 2008 and moved into Uptown—grandparents, living around 20-somethings. But the plans were fantastic, and we were all set to start demolition in October 2008, about one year after I got that call from Michael.

Of course, timing, as they say, is everything. Before we wacked one inch of that pool plaster, the financial markets melted. We pulled back and put a year’s worth of planning on hold until this summer. We’re in no rush—that’s the beauty of being empty nesters. We’ve scaled back our original plans and created three stages of demo and finish-out as the economy finds its footing.

First we’ll tear off the roof over the pool and open the area up to light. Phase two will be turning the two bedrooms into three. The windows will look outside. The third stage will be the interior kitchen. I have this vision of a booth where everyone sits—my mother, my grandbabies finger-painting, all that. The booth is the only thing Michael and I disagreed on. So I negotiated. I asked him what he wanted, and he said stone floors in the kitchen.  We’ve been married for 39 years. We’ve got the marriage thing—and the remodeling thing—down. In fact, now we’re informally counseling other couples in communication techniques during remodels.

Lesson 2: Compromise is the key to both renovation and marriage. 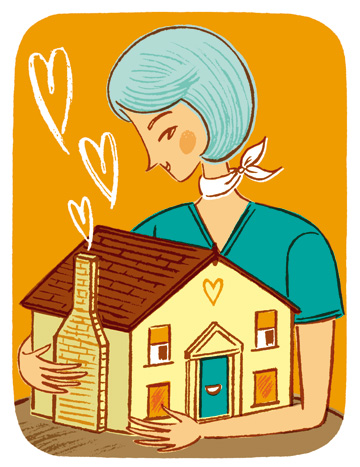 illustration by Moira Millman
illustration by Moira Millman
I wasn’t looking for trouble. I certainly wasn’t looking to move. But while out on a walk one Sunday last spring, I espied an open house. I made the mistake of entering. Inside, I was greeted by a wall of windows that afforded views of a swimming pool, a small lake, and ducks and geese lounging in the grass. I suppose it was then that my inner Marie Antoinette surfaced—I imagined myself reigning over this bucolic paradise. I called my husband and said those famous last words: “I’ve found the house I want, and we wouldn’t need to do a thing to it.”

When my husband and I looked at the house together, we saw two very different futures. I channeled a house on a lake—much like the one in Fort Worth that I had grown up in. My husband, on the other hand, saw it as an opportunity to fulfill his ecological dream house. He wanted geothermal heat pumps, solar energy, and reclaimed rainwater. And while all of that is perfectly lovely in theory, I had to explain to him that drilling more than a dozen 30-foot-deep holes in the small front yard would not only take us about 80 years to recoup costs, but our neighbors might shoot us for the constant jackhammering. Not the best way to score invites to block parties.

A year later, doing “nothing” has turned into changing everything. We had to replace that wall of windows I loved so much—they all leaked and weren’t up to code. We had to battle water and termite damage, and we had to add insulation.

And the work continued to pile up. We thought we could just clean up the old deck surrounding the pool. But after stepping on rusty nails and tripping on loose and rotten boards all over the place, we opted to tear out the whole thing. To our horror, we found a nightmarish tangle of pipes going nowhere and crossed wiring—much like my EKG at the time. We also determined that the house level was so far above the lake level that if we didn’t want to depend on a tall ladder to enter the house, we would need to hire a landscape architect for a complete architectural plan.

My little “move right in” project now had landscape architect Bill Bauers on board all the way from Austin. But we still needed a contractor. I interviewed a few who were so horrified by the condition of the house, they either wanted to tear it down completely or questioned my mental state. (Or both.) I already knew I was crazy, and I was resolute about not tearing down the house. I was also alone. Once my husband was forced to give up his dreams of geothermal heat pumps, he washed his hands of the whole project (while pouting, it should be noted).

So, as if crazy, resolute, and alone weren’t enough, I was also depressed. Thank God for our architect Bentley Tibbs. He suggested a contractor he had worked with on a number of jobs. Larry Hartman is not an arm waver. He’s one of those guys who always stays calm—a “this is not a problem” kind of guy. In other words, he was exactly what I—and this house—needed. He devised a budget we could live with, and he promised to make the house, if not “good as new,” at least “look like new.”

The project is close to complete now. After months and months of hearing Hartman say, “Peggy, we found something…” I’ve learned that’s never a good thing. But we’ve managed to come up with solutions that we can live with. The backyard is one big mud pit, but I can see the bones of the terraces that will lead up to the house. One day in the near future, I believe we can eliminate the need for that tall ladder.

The most important lesson we’ve learned is the art of compromise. My husband may not have gotten his state-of-the-art Inconvenient Truth-type stuff, but he did get some excellent insulation, thermal windows, and a stupidly expensive sound system. And I got my lake house.

Lesson 3: Even an architect does not get through a remodel unscathed. 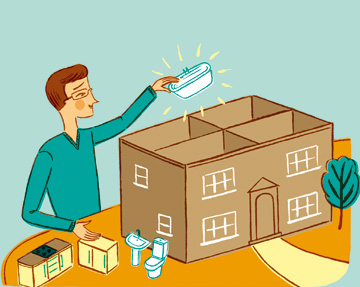 illustration by Moira Millman
illustration by Moira Millman
I am an architect and have been for 30 years. I’ve designed and planned the construction for houses, expanded footprints, and, yes, tackled many a renovation in my day. That’s why when it came to my own home renovation, I felt able and ready to run a tight ship. I, of all people, would think of everything and even plan for the unexpected with a budget cushion. But that’s the thing with home renovations. The best-laid plans of mice and men often go awry.

My house was built around 1956. It’s a period-style 1950s contemporary. With two grown daughters now in college, my wife, Cindy, and I thought it was time to de-baby proof. That meant condensing the playroom to make a smaller TV room, which gave us space for an expanded master closet and master bath—the original of which was about the size of a small trash can. While we were at it, the kitchen needed an overhaul, too.

The fun began on the second day, when I got a call from the contractor who basically said, “Houston, we have a problem.” My house has a slab-on-grade foundation with a low pitch roof, and there are no attics. All my mechanical systems and ductwork ran underneath the slab. I knew there was a possibility that the ductwork could have collapsed over the years, and as we started moving the plumbing to expand the master bath, we discovered that’s exactly what had happened. On a scale of 1 to 10, that complication is about a 9.5 and can cost thousands of dollars to resolve.

The timeline was intact, but the budget needed some finagling. I make a budget for my clients that allocates monies for contingencies—usually 3 to 7 percent of the total budget. We always have money set aside because things come up or in the end you’re going to pick out an upgrade that’s a little more expensive. It’s often those little details that make a project, so you should prepare for them.

Near the end of the renovation came the other major calamity—a debacle with the kitchen cabinets. In the first week, I had completed the interior elevations of the cabinets. I had all of my appliances selected. I met with the kitchen cabinet subcontractor at the house and went over all the drawings. I went to his shop to be sure I understood how he was going to be putting things together.

When the cabinets finally came to the house, they were the most horrifically built, horrible-looking cabinets I had ever seen on any project. Ever. After finding the cabinetmaker less than helpful (that’s putting it kindly), I brought in a second contractor. Within a day he had given me a bid, and by the end of the week we had new kitchen cabinets. Crisis averted.

Finally, we were done—two weeks late but just about on budget. If there is a moral to be had, it’s that Murphy’s Law is alive and well, even in the most capable of hands.