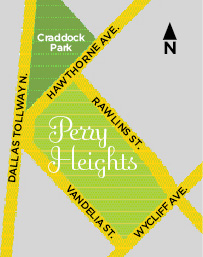 Why Perry Heights?
Perry Heights has charm, architectural integrity, rich history, and community tucked away on four shady streets. One of the last in-town family neighborhoods, it’s also one of the hottest real estate stories in town—once people find it. Snuggled just southeast of Wycliff Avenue, residents have easy access to downtown and all major highways while maintaining a leafy feel. A proactive volunteer neighborhood association employs off-duty Dallas police officers to patrol and holds at least one fund-raising activity each year. As a result, residents are almost always outside at the nearby Craddock Park, running or walking dogs. Developed in the early 1920s by Dallas oilman E. Gordon Perry, the neighborhood is home to some of the city’s oldest architecturally distinctive brick homes in Colonial Revival, Georgian mansions, bungalows, and Arts and Crafts Tudors that don’t swallow the woodsy lots. The homes on Rawlins Street were designated a conservation district in 2007. Initially, E. Gordon Perry restricted the street to two-story homes for grandeur. So many ministers lived on the 4300 to 4400 block in the 1930s that it became known as “Bishop’s Row.”

In 1922, Dallas real estate agent Jack Evans says the Dallas Morning News built a show house in Perry Heights to showcase the construction quality and touted it as the electrical home of the future.

“It featured a plug in every room,” says Evans, an Ellen Terry agent.