I’m not Aquarius, but I should be for how I am drawn to water. Lakes, creeks, puddles, a dripping faucet. Whatever. The point is my aquatic East Coast nature demands personal proximity to water. The Texan I married underestimated my will in that regard for our first seven years together, remaining quite content to raise our family in our M Streets duplex. Battle lines were drawn. He dug in his feet while I enlisted his mom’s real estate agent. My quiet quest for homeownership was thus waged, coincidentally one very wet Sunday six years ago.

Pulling up to one home, our agent said, “Christine, you probably won’t like this—it’s contemporary.” (That’s because I had droned on about wanting a 1920s tudor in Lakewood.) But this 1961 contemporary gave me pause. It was perched high on a hill and surrounded by immense oaks and cedars. The front-facing wall was mostly large gray stone, and plate glass windows spanned and followed the low-pitched roofline. But the best part was its long, lake house-like, lofted front porch replete with creaking, knocking deck boards. Though it flanked a courtyard, it may as well have been a fishing pier. I swear I heard waves lapping.

Inside, natural light streamed in from every direction. The longest side of the house was almost entirely windows and gave expansive views to water features and greenery. Wall-wide sliding glass doors opened to a solarium with tropical plants that reached the ceiling. All this, plus abundant clean lines, vaulted ceilings, and an open floor plan made the place feel airy and fresh. Definitely not your customary home in landlocked Dallas.

We merged forces, my husband and I, and made an offer nearly on the spot. We followed that up with a love letter to the sellers, promising to preserve the home and their sense of style. To some this might appear overzealous and poorly negotiated. But I’m telling you the house wasn’t even listed yet, and they had two standing offers. We acted fast and won the home of both our dreams. 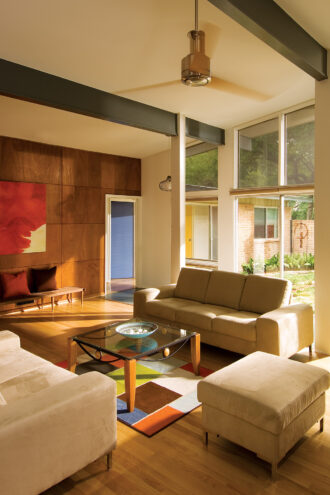 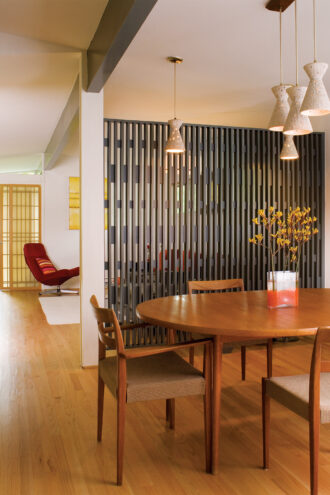 10449 Vinemont St.  As needed, Ju-Nel custom-designed Japanese suji screens on the job. The screen pattern seen in the foreground is repeated in and outside the house. The background screen of natural wood is a sliding partition door. The five dining room lights are original ceramic fixtures.
Danny Piassick

Amazing in itself, we agreed on the home. Even better is that on move-in day we were greeted by our architect neighbor and his wife with a cooler of beer and the comment, “You have no idea what a gem of a home you have—it’s a Ju-Nel.” His beer supply was plentiful, his Ju-Nel knowledge not so much. I pestered architects and fellow Ju-Nel homeowners for six years to learn more and have since unearthed Ju-Nel’s untold history.

First, there are only about 50 Ju-Nel homes. Each one is different. Almost all are in Eastwood Estates, Casa Linda, Old Lake Highlands, and Lake Highlands. They were designed and built by Lyle Rowley and Jack Wilson who got their start working for famed Dallas architect Howard Meyer on Temple Emanu-El and 3525 Turtle Creek.

Banks didn’t agree with their mission, however, and were reticent to make them loans. In the early going, Ju-Nel built spec homes, which attracted architects and other creatively inclined people to buy or make contracts with Ju-Nel Homes. Some of Dallas’s brightest creative stars, including Stan Richards (owner of The Richards Group), Kim Dawson (owner of Kim Dawson Modeling Agency) and Walter Hendl (Dallas Symphony Orchestra conductor in the late 1940s), were early Ju-Nel homeowners. Author and philanthropist Hazael Beckett awarded Ju-Nel their biggest contract to build her 15,000-square-foot, three-building “wildlife refuge”* in Sunnyvale. 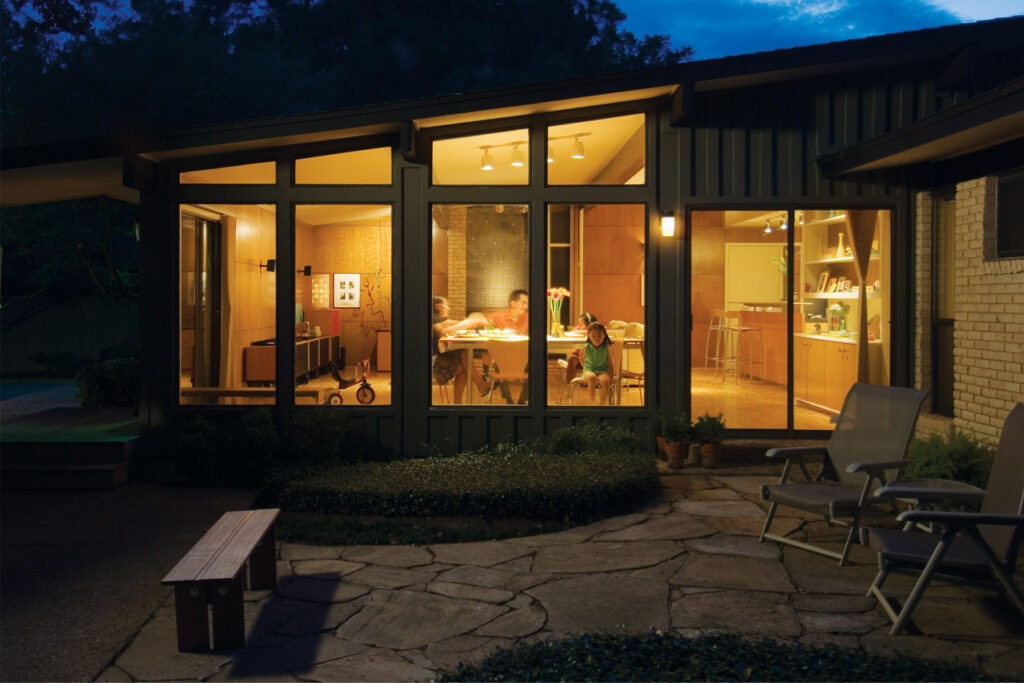 Long before sustainable design and energy efficiency were on anyone’s radar, Rowley and Wilson were there. They embraced sloped lots and custom-designing floor plans around natural elevation changes. Rowley’s and Wilson’s wives, Julie and Nelda (hence the name Ju-Nel,) sometimes questioned their husbands’ unbending resolve to preserve the natural landscape. When the foursome visited the lake house lot that Jack and Lyle bought for themselves, Julie took one at the site’s cliff and exclaimed, “Lyle, you bought pure air!”

Rowley and Wilson were voracious about leaving trees untouched. Their architectural plans show soffit cutouts made to accommodate even the smallest saplings. Lead builder for Ju-Nel, B.W. Heddin, recalls, “It didn’t matter if the tree was 4 inches across—it stayed. And you really heard it from Jack if we accidentally took one down.” Larger than standard soffits shielded the home interiors from the sun, and houses and windows were orientated to maximize seasonal shifts in sunlight. They also used recycled and natural materials, such as bricks from the Chicago Fire and teak.

Their mid-century approach to home design proved timeless. Art enthusiasts and conservationists live in them now just as they did at the time they were built. I and my fellow Ju-Nel homeowners are pretty smug about our little finds nestled here in the hills of White Rock Lake. The Ju-Nel Club is small and devout. With a little luck and good timing, you just might find your way in. Just be sure to have a nice love letter at bidding time.

My love affair with Ju-Nel homes does not end at my door—I’m always looking for great examples of their work. This self-guided driving tour will show you classic contemporary homes built long before contemporary was cool. You’ll know you’re approaching a Ju-Nel Home as you glide down hills uncharacteristically large for Dallas, or when you near thickly wooded creek beds and travel under tree-canopied streets.