Since moving to North Texas from Mumbai as a newlywed in the early 2000s, Neha Kunte has made it a personal mission to break down silos and cultural barriers in business.

Seeing a lot of division in the world, she tapped into her love of mehndi to bond with other leaders. Mehndi (men-dee) is the ornate drawing often seen on the hands and bodies of people celebrating in South Asian communities. Although the art form has significant cultural meaning, Kunte also views it as a conversation starter.

Her background in mehndi was not something passed down to her. She picked it up as a way to make some pocket money in college.

“You would think everybody knows how to do mehndi in India; that’s not really the case,” she laughs as we sit down at her dining room table for a lunch of perfectly crisp samosas, lentils, and a paneer tikka.

Working as a Japanese interpreter while living in India, Kunte had an opportunity to teach mehndi to Japanese residents in Mumbai. Since moving to Texas and co-founding MNK Infotech (which works with government clients such as the City of Dallas, DISD, DART, and Dallas College), Kunte uses the art form to bridge relationships. Locally, she has hosted workshops at the Crow Museum of Asian Art and the Dallas Museum of Art to share her passion. 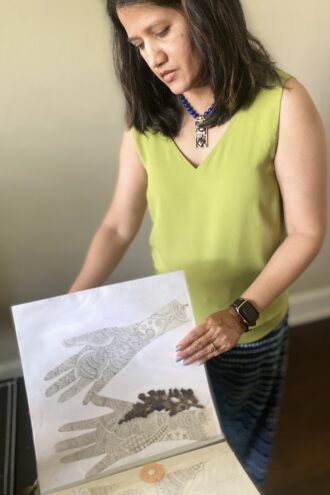 Neha Kunte thumbs through a book of her Mehndi drawing.
Bianca R. Montes

But the past 18 months spurred the mother of two to look for additional ways to use mehndi to create harmony in businesses that have been bifurcated by a global pandemic and remote work. Through her involvement in organizations such as the Asian Chamber and DEC’s Women of Innovation Group, Kunte says she heard a collective outcry of people who were stressed, restless, and uncomfortable emotionally, physically, financially, and mentally.

“There is so much unrest. Everybody is looking for new avenues to express their feelings, express their sadness and sorrow, and there needs to be a way where they can get it out,” she says.

Beyond the fun of learning a new craft, Kunte says mehndi has medicinal benefits, too; it is known to provide relief from stress, fever, and headaches. Henna leaves, augmented with tea water and eucalyptus oil, are ground up into a paste. Its smell—kind of like an earthier, grassier Vicks VapoRub—is meditative.

“The aroma calms you down; It has a magical scent,” Kunte says. “It all starts with inhaling that really great breath of air. One should have ways to calm themselves, and we have to make that cautious effort to identify or find sources where you can find your peace.”