Eddy Badrina knew he wanted to run a redemptive organization after selling his digital marketing software company BuzzShift in 2016—an organization where “leaders eat last,” employees are treated with care, and societal culture is renewed. So, when investors at Eden Green Technology called about joining the company as CEO in 2019, Badrina answered.

Because the operations are typically in outlying areas, it also means longer delivery times. Conversely, traditional vertical farms need an abundance of artificial light to nurture crops on the farm’s lower layers, creating high power demands that drive up costs. “We’ve solved that by combining the best of both worlds—a greenhouse with vertical farming,” Badrina says. 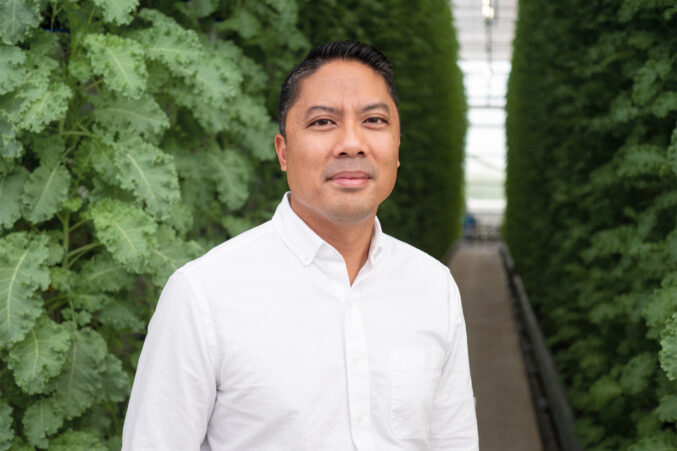 On the Grow Eddy Badrina says his company’s new facility will allow it to produce more than 550 tons of greens each year.
Courtesy of Eden Green Technology

The company opened an R&D facility in Cleburne in 2018 and launched a pilot program selling greens at Walmart. But then trouble with a former chairman, who had questionable connections with Donald Trump Jr. and was accused of mismanaging $19.4 million, stalled Eden Green’s momentum. “They had been through a few CEOs,” Badrina says. “The vision was lost. The mission was not clear.”

Badrina had served as executive director for the White House Initiative on Asian Americans and Pacific Islanders before winding his way through business development at Wells Fargo, other marketing leadership roles, and launching two companies. At Eden Green, he was tasked with resetting the course and rallying the troops. His first move? Dissolving the Walmart program. “The company was not set up for it,” Badrina says.

Instead of building out a local produce label for Eden Green, he marketed its technology to other growers. “The vision is to have a mesh network of greenhouses all across the United States,” he says. The company also is adding an 83,000-square-foot vertical greenhouse in Cleburne. When finished in April 2022, it will produce 550 tons of arugula, kale, and spinach per year, with 11 to 13 harvests. Nearly all of the greens are already spoken for. “It’s akin to pre-selling a building and its rent rolls before even breaking ground,” Badrina says.

Next, he aims to bring similar greenhouses to the nation’s top 10 metropolitan areas. “We’re eyeing the Northeast,” Badrina says, adding that he’s about to launch a new capital raise to help fund the expansion.