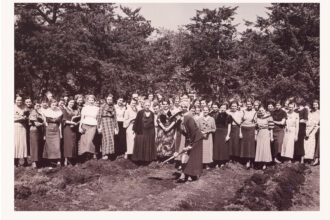 Digging In
Hockaday (with shovel) at a groundbreaking for the school’s new junior college, in 1934.

Texas native and The Hockaday School founder Ela Hockaday was born into a family of experienced school leadership. Her father was a schoolmaster who had an academy in Ladonia, Texas, her hometown. He made sure that his daughter was well versed and fluent in Latin, Hebrew, and Greek.

Hockaday’s mother died when she was six, and she was raised by her older sister and stern father. She inherited her father’s affect and was well known for a strong sense of discipline, which served her well in developing one nation’s largest and most prestigious private schools.

A well-educated woman, she received her Bachelor of Arts in education from North Texas State Normal School, now known as the University of North Texas. Hockaday also attended The University of Chicago and The Teacher’s College at Columbia University.

Hockaday began teaching at Jefferson School in Sherman, where she gained respect being able to tame the wildest of students, eventually becoming the school’s principal. She gained prominence as an educator and leader developing her delicate balance of discipline, yet able to get the best out of students. After Jefferson School, Hockaday went on to teach at Durant Normal School, where she headed the biology department before moving to Dallas.

M.B. Terrill, head of Hockaday’s alma mater North Texas Teacher’s College and founder of the prestigious Terrill School for Boys, recommended that she establish an all-girls school in Dallas. Soon after the recommendation, Hockaday was recruited by businessmen of Dallas to provide their daughters a rigorous and well-rounded education that could compare to education only men had access to at the time. Her challenge was establishing an educational institution of unprecedented quality for the women of Dallas.

Hockaday established the Hockaday School for Girls preparatory in 1913. Built on the four cornerstones of character, courtesy, scholarship, and athletics, the Hockaday School for Girls removed the limits of a woman’s education before women had the right to vote. The first class of 10 graduated in a modest home on North Haskell Avenue, from a curriculum including mathematics, English, history, Latin, German, and French.

Her all-girls boarding school was established adjacent to Terrill’s school for boys. The Terrill School for Boys and the Hockaday School for Girls was separated by a wooden fence students often climbed out of curiosity. Hockaday’s students recall the excitement of sports games cheered on by the Terrill boys.

To this day, Hockaday and Terrill’s school, now named St. Mark’s, support each other’s academic programs. In 1972, when computers were out of budget, both school’s split the cost of one and shared the technology. Today both schools support the other’s culture and arts by participating in an annual combined school musical.

Hockaday served as headmistress for 33 years then lived in a house on the edge of campus after retiring. Following her death, Dallas Mayor Erik Jonsson pushed a move to the school’s present-day site in North Dallas. Earlier this year, school trustees approved a plan to phase out the school’s boarding component.

Today, Hockaday serves students from Pre-K through twelfth grade with a teacher-student ratio of one to nine. Offering a college preparatory curriculum with Advanced Placement courses, honors courses, interdisciplinary programs, and co-curricular classes with St. Mark’s, Hockaday remains well known for its academic prestige and is often ranked as one of the best private girls’ schools in the country.