It’s no secret that Amanda Moreno-Lake and Jim Lake Jr. have a vested interest in Oak Cliff. From decades back, when Jim brokered a building for his father in what would become the Bishop Arts District, and through numerous subsequent redevelopments, the couple is playing real-life Monopoly with a combined half-million square feet of property in the neighborhood, including Jefferson Tower and the building that houses Lockhart Smokehouse.

Their latest acquisition of Oak Cliff Tower isn’t just a story about real estate; it’s a tale filled with immense challenges. “This iconic building for us was completing the puzzle we have here,” Amanda says, as we walk through the lobby of the 15-story asset.

A Focus on Overlooked Markets

Jim Lake Jr. and Amanda Moreno-Lake may have an affinity for Oak Cliff, but the couple (together and individually) have left their mark throughout the region. Jim worked tirelessly to change zoning laws in the Design District, bringing Trinity Lofts, the first residential and mixed-use project in the area. The couple also transformed downtown Waxahachie, where they set new records for rents and redeveloped the historic, 106-year-old Rogers Hotel. Their latest endeavors involve projects in Corsicana and Ennis, where they’re creating mixed-use hubs with a combined 11 buildings.

The couple’s quest to buy the property began about a year ago, right when a global pandemic forced offices to shut their doors. Market conditions, combined with the buy being an office building in Dallas’ southern sector, was just enough to give their longtime bank pause when it came to investing in their vision.

With financing falling through in the eleventh hour, Amanda did what she does best: hustle.

“I have tough skin. I wasn’t going to sit around crying,” she says. “When someone tells me ‘no’ and tries to shut the door in my face, it makes me work harder. I am very happy to say there is a lot of money out there besides just North Dallas.”

The couple’s track record of success in North Oak Cliff, Waxahachie, and the Design District helped attract an unconventional mix of investors—90 percent of whom are local to the neighborhood, including first- and second-generation families from Jordan, Afghanistan, and Mexico.

“For us, it is creating a new diverse group,” Amanda says. “It is the most diverse group that [we have ever worked with], which I am excited about.”

Bringing on a new group of investors also has placed extreme pressure on the Lakes, who feel a tremendous responsibility to make sure their partners get a solid return on their investment. Amanda tears up when she thinks about one specific investor who asked her, “Why do you believe in this project so much?” She answered, “Because I’ve lived here all my life and I know what is going to happen. I see it. I know—so you have to trust me.” 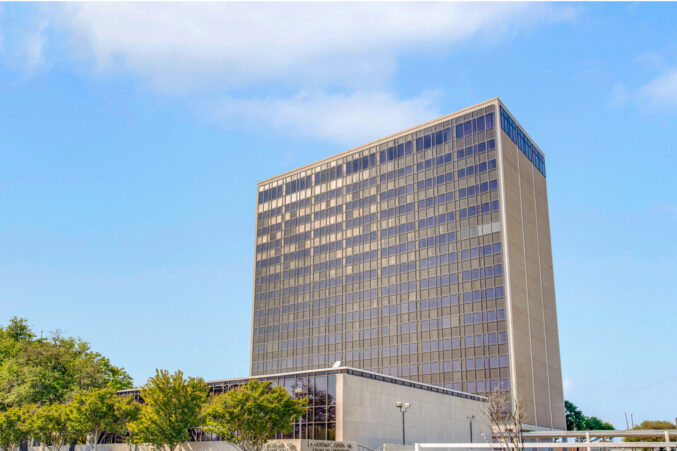 New Heights Oak Cliff Tower is the tallest high-rise in the neighborhood.
Courtesy of Jim Lake Cos.

Opened in 1964, the 15-story Oak Cliff Tower at Zang Boulevard and 12th Street originally housed Oak Cliff Bank and Trust. The iconic building is filled with memories for locals like Amanda, who remembers visiting the building as a child with her parents. And for decades, the building was home to the popular dining and social venue with its Top O’ the Cliff Club.

In the coming months, the Lakes hope to once again light up the night skyline with an event’s venue on the building’s top floor. The couple also plans to turn an empty floor of suites into an incubator space for small local businesses and transform the basement and outdoor credenza into a marketplace for artisans to sell their goods. The 277,920-square-foot building is currently leased to long-term tenants like the State of Texas and Bank of America.

The deal also included about five acres of vacant land along 12th, Zang, and Beckley—likely a considerable payoff as the neighborhood is on the cusp of future development, including a deck park over Interstate 35E and plans to create a gateway into the future Jefferson Historic District.

“This is going to be a huge anchor, the entry into the Jefferson Historic District, and we want to brand it that way,” Jim says. “Having this type of asset, our goal is to make it one of the best office buildings in Dallas over the next five years.”

“When someone tells me ‘no’ and tries to shut the door in my face, it makes me work harder.”

For Jim and Amanda, one might say they saw the forest through the trees when it came to a revitalized Oak Cliff—although it wasn’t always crystal-clear.

“It was tough in the beginning; I remember we had to almost drag people kicking and screaming to come from North Dallas to look at space in Oak Cliff,” Jim says. Growing up in North Dallas and seeing what was going on in the southern sector, he knew it was an opportunity for him to make a difference in the community. “We envisioned something like what we have today, but I didn’t see that far—I don’t think—at the time,” Lake says. “Seeing the difference that we make in a neighborhood and community, taking our skillset, and giving back to the community, is very important. I think we always say, ‘We can’t do it all, but if we can do a project in a certain area and make a difference, then other people can come in and redevelop around us.’”