When I reached out to set up lunch with Alvaro Luque, CEO of Avocados From Mexico, there was no real question about where he’d want to dine.

AvoEatery in Trinity Groves opened in early 2020, just weeks before COVID-19 wreaked havoc on, well, everything. But the restaurant is doing surprisingly well, and there’s already talk of expansion—at Trinity Groves and in sports venues around the country.

The eatery showcases the versatility of the avocado, from appetizers to dessert. During our visit, we tried items from the winter menu, including pumpkin spice guacamole and avocado apple cobbler, as well as staples like the signature AvoBurger.

A native of Costa Rica and former Mission Foods marketing exec, Luque took the helm of Irving-based AFM in 2014, about six months after it was formed. It’s a unique partnership between the Mexican Hass Avocado Importers Association, which represents hundreds of importers and distributors in the U.S., and a Mexican trade group representing more than 29,000 avocado growers and about 65 packers, and is overseen by the USDA. AFM’s budget is based on annual import numbers. At 2.1 billion pounds for FY2020, that’s close to $60 million a year—and it must all be spent on promotional endeavors.

Luque calls it a marketer’s dream. He has built AFM’s promotional strategy around three strengths: the avocado’s health and wellness benefits, versatility, and year-round availability. Most avocados from Mexico are grown in the state of Michoacán, where, because of its volcanic soil, altitudes, and weather conditions, avocados have four blooms per year. In other places, such as, say, California, they only have one bloom.

In his first meeting as CEO with the AFM board, Luque proposed an idea that reflected his big-thinking style: a Super Bowl commercial.

“I didn’t know how they would react to the idea of spending $4 million on a 30-second ad,” he says. “But we had a very good case for doing it, and I believe it changed the future of this company.” 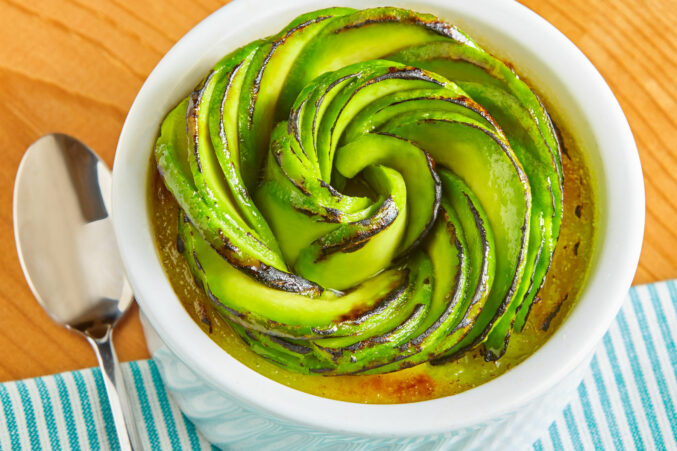 AvoEatery showcases the versatility of the avocado, from appetizers to desserts like this avocado crème Brulee. (AFM)

Since then, Luque has built what he calls “the Coca-Cola of produce,” recruiting a team of star marketers from Procter & Gamble, Disney, and, yes, Coca-Cola. During his seven-year tenure, AFM’s market share has gone from about 60 percent to 85 percent, and brand preference has grown from 20 percent to 55 percent. The Super Bowl ads set the stage, but growth has come from a sophisticated strategy that involves digital activities, a culinary institute, and other experiential initiatives, such as AvoEatery.

AFM also is jumping into e-commerce; Luque predicts that in the next five years or so, 20 percent of avocados from Mexico will be sold online. He’s most excited, though, about opportunities in mass personalization. AFM already has a robust consumer data platform with info on more than 80 million consumers.

“We are investing a lot into how to enrich those IDs as much as possible because we know that in two years, we’re going to lose cookies,” he says, referring to tools that are used to monitor online browsing activity. “Companies that move first and create their own first-party data—they’re going to win.”