When she was a young attorney in the 1990s, Yvette Ostolaza says pregnancy for a working woman meant the death of her career—especially in a demanding field such as law.

“They cleared out your office, and they assumed you weren’t coming back from maternity leave,” she says. Ostolaza herself faced similar questions when work colleagues learned she was with child. “Literally, people would say, ‘Oh, you’re coming back?’”

Ostolaza did indeed come back, and her career has flourished. She recently was named to the top spot at Sidley, which has 1,900 attorneys and is the nation’s sixth-largest law firm.

I spoke with numerous working mothers for this story, in different stages of their careers and in various industries. I, obviously, am not a working mom; in fact, having a pediatrician wife means I pale in comparison when it comes to skills and aptitude in caring for our two toddler sons. But as the non-breadwinning parent with a flexible job, I am often the one who stays home with sick children, cleans the house, and runs errands.

But here is one thing that never happened to me: No one asked me when my son was born if I would leave the workforce or go part-time; yet, women get asked this all the time. Full-time childcare is exceptionally demanding, as many of us discovered during the shutdowns of 2020. But to think that a woman’s career is more easily abandoned than a man’s is the epitome of the problem.

Women are contemplating downshifting their careers or leaving them entirely

As I spoke with these North Texas business leaders, an analogy kept coming up that I had never heard before. It goes like this: The average working woman is asked to juggle many balls, between chauffeuring her children to activities and performing at a high level at work, all while meeting their social, spiritual, physical, and emotional needs. Some of these juggled balls are glass, and others are plastic. The plastic ones can—and will—be dropped at some point. Maybe it’s a work deadline that isn’t going to happen. Perhaps it’s getting a healthy dinner on the table, a kid’s soccer game, or a piano recital. But other balls are glass and would shatter if dropped. These are the top priorities. It might be a significant client deliverable, a daughter’s playoff game, or a milestone family celebration. Juggling moms have to figure out which balls are plastic, which ones are glass, and constantly decide what gets dropped.

“There was the expectation for you to work like you don’t have kids and be a parent like you don’t work,” says Jackie Marshall, a senior vice president at CBRE in Dallas, who had her first child in 2020. “That’s not real, and that can’t happen. You can’t ‘have it all,’ like they used to say, so you have to figure out what’s most important to you—and tell yourself to accept it and know that things will not always feel comfortable. In the long run, you’re doing the right thing.”

The pandemic added another spinning plate to the balancing act working mothers are expected to perform. With school and daycare closures and shifts to remote working, women were more likely to take on childcare and teaching duties, all while continuing to keep up with the demands of their careers. A 2020 study by consulting firm McKinsey found that up to 2 million women were considering leaving the workplace, threatening to undo much of the progress made by women in business leadership over the past decade. 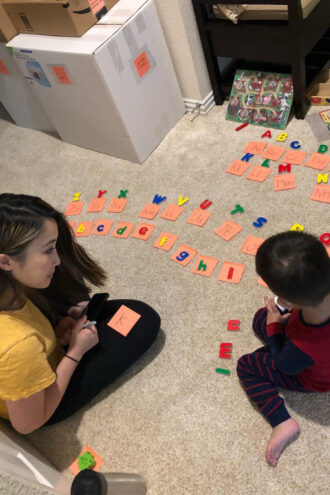 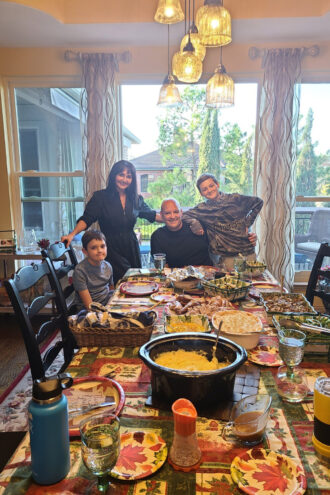 The survey found that women lacked the flexibility they needed at work and felt they were negatively judged for being less available during 9-5 because of their caregiving responsibilities. Unable to bring their whole self to work in the way they used to and feeling like they couldn’t share their struggles with teammates and managers, many women questioned their ability and desire to keep working. The survey found that mothers were more likely than fathers to feel exhausted, burned out, and pressured to work more; this was true for both entry-level and executive-level women.

As a former educator, Bank of America Dallas Market President Jennifer Chandler felt she was well prepared to take on schooling at home during the pandemic.

“I’m going to be all over this. I even had the kids getting up in the morning saying the Pledge of Allegiance. I thought they needed routine. We’ve got to keep some normalcy,” she said at a recent working moms panel hosted by D CEO. “It did not take more than just a few days to hit exhaustion,” Chandler said. “The lines were getting very blurred, being on web meetings all day long with the kids in another room on their web meetings as well.”

COVID-19 has meant different challenges for women in various careers and stages of motherhood. For women with young children, keeping them productive and happy became all-encompassing. But for mothers of school-aged or teenaged children who might be more independent during remote school, the challenge was keeping a sense of normalcy for a child whose routines, social life, and activities were uprooted.

The forced togetherness did create some positives, says Noelle LeVeaux, a single mother of two teenage girls and the chief marketing officer of Communities Foundation of Texas.

“As the months went on, I felt a connection built between us that the hustle-and-bustle had eliminated,” LeVeaux says. “We recaptured what I would consider family time with riding bikes and relaxation.”

When the lockdown was in full effect, I took on many of the domestic responsibilities at home. As a working dad, I was an exception. A recent Marketplace-Edison study found stark gender disparity when it came to supervising children during the pandemic. Sixty-three percent of women said they were primarily responsible, compared to 29 percent of men. It can be a delicate dance, deciding whose career gets priority at different points. Bridget Lopez, managing partner at Linebarger Goggan Blair & Sampson, says she had to have a conversation with her husband: “I said, ‘I know you’re super busy. So am I. You’re going to have to take part of the responsibility, and I’ll take the other part, but I can’t do it all myself.’ Unfortunately, in most homes, [women] don’t have the power dynamic that I have.”

But before long, other issues arose. “I found that the stress started building back up,” LeVeaux says. “For me, it is that the lack of connectivity with other people. I wasn’t going out with my girlfriends, which is therapy. As a woman, our tribes are always extremely important to us, and we were losing that connectivity.”

For those with children, not having family in town to lean on or create a bubble with during the pandemic meant more isolation. Such was the case for Aimee DiCicco, senior vice president of commercial business development at FedEx Office in Dallas and the mother of two pre-teen boys. Early on during work-from-home, things teetered on the edge of disaster, DiCicco says.

“They are very active boys, and they can find creative things to do when people aren’t giving them structure and watching them,” she says. “My husband and I were knee-deep in work, and we were fairly shut off from everything at that point. It had the opportunity to turn into uncontrolled chaos pretty quickly.”

The family worked to define set school time, playtime, and other activities. Adding that much routine and structure to home life has its challenges, especially when work intrudes.

“Your home is your safe place and sanctuary. You should be able to let your hair down when you’re at home, but you can’t be letting your hair down and be working,” DiCicco says. “That was one of the hardest things that I had to come to terms with and figure out how to navigate. I’m not going to say that it ever was flawless. It was hard work every day to maintain that balance.”

Leading Through the Crisis

Along with worries relating to their own families, women leaders also faced concerns about the safety of employees and the viability of their businesses. There weren’t enough hours in the day to answer every question, and for high-achieving mothers, the pressure they put on themselves was often the most significant challenge.

“There is the self-expectation that many of us have, asking ourselves, ‘Will I be able to do the job up to 100 percent of my capacity?’” says Cindy Tran, managing director of consulting firm Slalom in Dallas. “Even before COVID, there was always that pressure. You have that decision: Am I going to be able to show up in a way that I’ll be proud of myself?”

Tran’s husband helped with childcare but had to go back to the workplace sooner than she did. “When offices started opening up, it was me with our toddler at home, and the shift of the pendulum was drastic. We finally just cried uncle and [sent our child to daycare].”

As the CEO of Medical City Children’s Hospital, Jessica O’Neal wasn’t able to work from home while her elementary-aged son and daughter were remote learning. On top of that stress, she had to be extra mindful about the transmission of COVID-19, as working in healthcare increased the risk of exposure.

“We are all human, and we went through an array of emotions, asking, ‘How does this affect my kids?’” O’Neal says.

“When we were trying to potty train, my son would show people his poop while we were on calls. It was insane. It was helpful to not feel like I had to cover for whatever chaos was happening.”

When it comes to the difference between the glass and plastic balls, all moms know that the most critical glass ball of all is the wellbeing of their children. Heather Capps founded the marketing and communications firm HCK2 Partners in 2004 while she was a single mother of two. She constantly felt the tension between work and her family as a vice president at her former company and wanted to create a different kind of environment at her firm.

“There’s that constant struggle of what is more important, my visibility at my job or my kids? I didn’t want anyone to ever feel that way,” she says.

When her own office reopened in January, Capps added more changes to the already flexible work environment to support working parents; Mondays, Wednesdays, and Fridays became office days, while Tuesdays and Thursdays were work-from-home days. Capps says the plan allows for a good balance between collaboration and heads-down work while supporting a flexible schedule.

“After realizing that we could still efficiently operate the business with people at home, we wanted to be the embodiment of that core value of having a balanced life,” she says.

Corporate practices have become more progressive in recent decades, as organizations realize that making the workplace more comfortable for mothers is the right thing to do—and makes good business sense. The pandemic illuminated the pressures working moms face and the need to provide even more support. Businesses that want to retain top-flight talent see the wisdom of those investments.

According to Roslyn Dawson Thompson of the Texas Women’s Foundation, 600,000 Texas women permanently left the workforce during the pandemic because of the pressures they faced.

“They simply cannot contend with the demands of two jobs that are full-time, one being caregiving and childcare,” Thompson says. “We have worlds of opportunity ahead to address the effects of the women that have left the workforce and to bring them back in.”