Catching bass at Sam Rayburn Reservoir, Lake Texoma, and Possum Kingdom Lake was a rite of passage for Jackson-Shaw President and COO Michele Wheeler, who grew up in East Texas and fished with her father. But she would never have called it a passion. It wasn’t until she went fly fishing for the first time when her firm began developing a ranch community in Colorado that she found true zeal while casting a line.

Wading into the Wilderness

In the heart of the Rocky Mountains, Wilder on the Taylor has been a working ranch since the early 1900s and is a historic preservation project for Jackson-Shaw. It’s allowing just 32 homesteads on the 2,100-acre site. Wheeler’s home, designed by CCY Architects of Aspen, sits on a 45-acre parcel. Much like the way ski slopes are categorized, Wilder’s bountiful fishing opportunities accommodate anglers of various abilities. “The ponds are like green runs, the stream is like a blue run, and the river is much like a black run,” Wheeler says.

Wheeler says she “screams like a girl” when she feels her pole tug with the weight of a trout. In those energized moments, you have to be careful not to forget things like form, she advises: “The fish tries to trick you, and you have to learn to be patient.”

Wheeler has led Jackson-Shaw since 2005. Known for its industrial and hospitality developments, the company has also dabbled in residential, most recently with Wilder on the Taylor near Crested Butte. After serving as master developer for the 2,100-acre project, Wheeler fell in love with the land, bought a homestead site, and built a place of her own. She and her husband spend as much time there as they can during summer months and have an unofficial competition every time they fish.

Like real estate deals, fly fishing requires finesse, Wheeler says. It involves flicking the rod between two triangular points in the air—called the casting arc—until your line forward-casts and back-casts in tight, circular loops. When you get it right, the loops form a smooth, missile-like shape that sails through the sky. 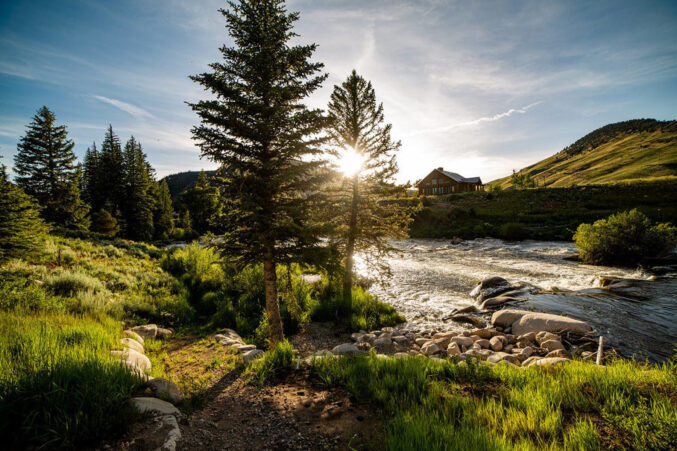 Back to Nature, The Taylor River runs through Jackson-Shaw’s Wilder on the Taylor community in Colorado.
Jackson-Shaw

The sport has taught her to be more patient, Wheeler says.

Fly fishing has also taught Wheeler the importance of detaching from the bustle of life.

“When you’re out on the water, you’ve got pine trees surrounding you, and it’s beautiful,” she says. “You don’t have your cell phone, and you are totally in the moment; your mind isn’t wandering about the conference call you have to make. We sometimes forget that we need to exhale now and then.”