Jean Savage knew her two young sons weren’t happy. Her family had picked up and moved seven times as she made her way up the ranks at motion controls maker Parker Hannifin, but they had been settled in Alabama for an extended time, and the boys didn’t want to leave. It was 2002, and Savage had just gotten another promotion; this one would take the family back to Ohio. The boys had been born there but were young when they left, and their anchors were now all in Alabama. Besides, middle school football practice was just days away from starting.

Nevertheless, the car was packed, and Savage and her sons were on their way, with their father planning to join them later. Savage had one stop to make first. Progress Rail Services Corp., a local company, wanted to talk with her about an opportunity, and she had agreed to a quick chat.

“All of my suits were packed, so I went in very casually. It was a no-lose interview,” she says. “It went great, but when it was over, I got back in the car and started driving.”

An hour down the road, her phone rang. Progress was calling to offer her a job.

“It was unbelievable,” Savage says. “I knew Parker, and they were progressing me well, but I had a choice to make: Was I willing to make a career sacrifice for the family? At that point, I was.”

So, Savage turned the car around and got into the rail business.

It was a move that ultimately would position her perfectly for her current role at Dallas-based Trinity Industries. The company was founded by C.J. Bender in Dallas in 1937 and subsequently led by his nephew, Ray Wallace, who turned over the reins to his son, Tim Wallace, in 1998. Savage became the first non-family member—and the first woman—to take the helm when she became CEO and president in early 2020. 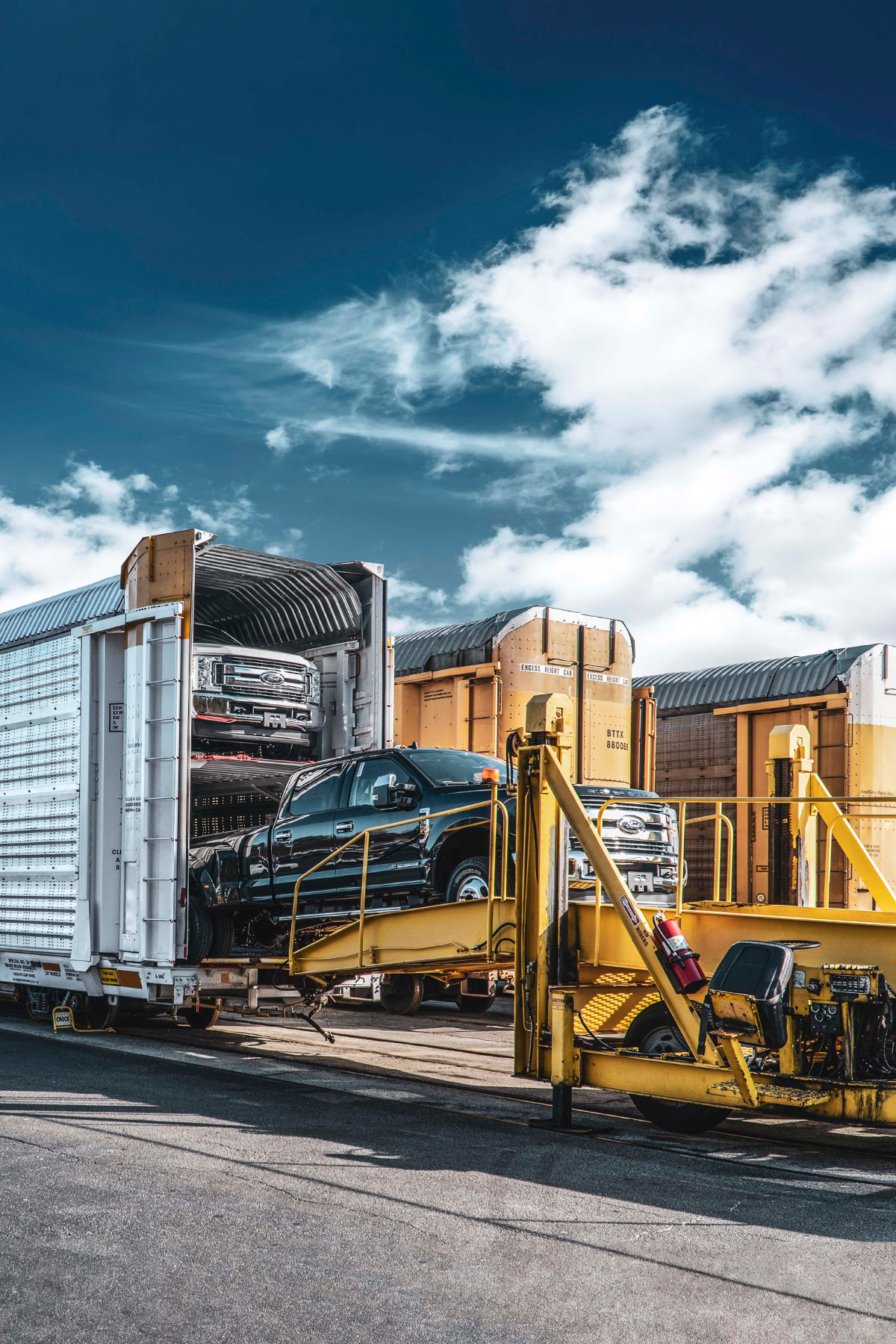 TrinityRail is a longtime leader in making and servicing autorack cars, which transport finished vehicles by rail.
Courtesy of Tadd Myers and Trinity Industries

An executive with Caterpillar at the time, she had gotten to know Trinity through serving on its board, which she joined in 2018. She was not involved in the CEO search after Wallace announced his plans to retire, nor did she throw her hat in the ring. But Wallace himself approached her and said, “Jean, I think you have the right skill sets. Would you be interested in this role?”

Savage had been given many opportunities at Caterpillar, which acquired Progress Rail in 2006. The decision to move to Trinity, which generated nearly $2 billion in revenue in 2020, came down to possibilities.

“It was the chance to see what we as a team could do to transition the business,” she says. “That’s what drove me—to see what the impact could be.”

Savage grew up in Middletown, Ohio, the youngest girl of six children. Her father was a welder; her mother stayed at home until the kids were old enough to fend for themselves. Savage learned early on that “if you want something, you earn it,” and got a job at the age of 12 in the arcade of a local amusement park called Fantasy Farm. Noting her interest in the way things worked, her boss taught her how to fix the wiring and do other repairs.

In high school, Savage was one of those students who tried everything. She played softball, basketball, and ran some track; she was in Junior Achievement, Spanish Club, Electronics Club, and Math Club.

Career advice from the CEO:

Don’t focus on your next move; do the best you can at the job you’re in.

Savage did not have a straight climb up the corporate ladder, and she says others should consider a non-linear path, too: “Don’t always be thinking about that next step in your career. Also, be willing to go sideways to learn other parts of the business. I’ve even taken a step back to learn. Don’t overlook opportunities to expand your knowledge. If you can’t change roles, try to get on a cross-functional team and learn through that. All of these things really helped me be ready for the role I’m in today.”

A week after graduating, Savage was on a plane for the first time, flying to the U.S. Army base in Fort Jackson, South Carolina. At 18, she was one of the youngest recruits in basic training. Nevertheless, she was made a squad leader. It taught her what can happen when people work in a team and that every role is important.

“We all have jobs to do,” she says. “We just have different jobs to do.”

Savage worked in Army intelligence. She thought she might make a career in the military but fell in love and, after a year at Fort Huachuca, Arizona, moved home to Ohio and got married. At Parker Hannifin, she started in robotics and engineering then quickly moved into different business units and P&L roles. She had been with the company for 15 years when she took the job with Progress Rail.

Founder and CEO Billy Ainsworth interviewed her. “I knew within about five minutes that I wanted to hire her,” he says. “It was her poise, her self-confidence, the way she answered questions.” Savage proved to be an exceptional leader, Ainsworth says. “She’s like Nick Saban or Bear Bryant or other great coaches. She has a unique ability to hold people accountable and take them to the next level.”

Ainsworth and Marty Haycraft (who’s now president and CEO), worked with Savage on nights and weekends to teach her about the rail business and its many acronyms and regulations. Doug Creech, now senior vice president, was another mentor.

“He was an encyclopedia,” Savage says. “If you listened and took notes, he would always have time for you. Now, if you went back and asked him the same question twice, he might get a little frustrated; he taught me to listen and learn.”

An even more important lesson came from Ainsworth. Progress Rail had a scrapping business, where it would occasionally remanufacture and sell components. Savage came from a just-in-time background and wanted to get rid of the scrap inventory. Ainsworth told her if she sold it, she’d regret it. But he let her do it anyway. When demand came back some months later, he walked into her office, sat down at her desk, and showed her the revenue that could have been generated from what had been on the books as scrap.

“It taught me that you had better understand your business drivers when you go into a new company or unit,” Savage says. “You need to take everything in before making changes.” 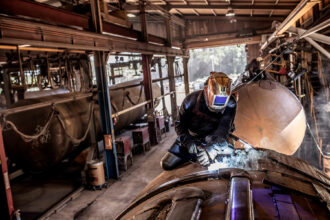 A welder at TrinityRail’s facility in Longview affixes coils to a tank car; they help heat the commodity for easier unloading.
Courtesy of Tadd Myers and Trinity Industries 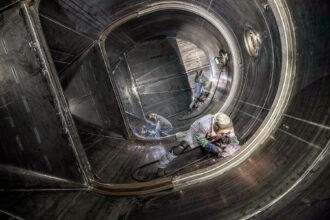 Welders perform work inside a hopper railcar, which carries a range of commodities, at TrinityRail’s facility in Saginaw.
Courtesy of Tadd Myers and Trinity Industries

Ainsworth sold Progress Rail to Caterpillar in 2006, but stayed on as CEO until recently retiring. In 2014, Savage moved to Peoria, Illinois, to join the mothership and serve as chief technology officer and VP of Caterpillar’s innovation and technology development division. When she took the helm of its surface mining and technology group three years later, she became deeply involved in efforts that made Caterpillar a leading player in mining autonomy technology. The initiative was not without controversy. For one thing, it meant bypassing equipment dealers to work with customers directly.

“It was a radical departure from the traditional business in a lot of ways,” he says. “It was like a startup within a big company. Jean was always very supportive in meetings with executives or customers—even when she risked having to engage in things that could be fairly confrontational.”

“My peers and I were really disappointed when we learned that she was leaving to take a CEO role, but there wasn’t one among us who was surprised.”

Trinity Industries does not operate railroads. It has three primary business segments:

Savage began her new job at Trinity in February 2020—just a couple of weeks before the COVID-19 lockdown went into effect. She worked to build relationships with employees by holding town halls. She’d give a company update for 20 or 30 minutes then spend the rest of the time taking questions, which workers could post anonymously.

Trinity had separated from its infrastructure (non-rail) business, which now operates as Arcosa, in 2018. Under the TrinityRail brand, it focuses on three segments—railcar leasing and management services, rail products, and highway products. (See sidebar at left for more.) Savage saw that the units were siloed; to her, it made sense to collaborate and leverage internal strengths. It also made sense, from an earnings perspective, to shift from an emphasis on manufacturing to a focus on leasing.

Instead of slowing down during the shutdown, she accelerated the company’s transformation. She gathered information from the leadership team and others throughout the company. Pulling from early lessons at Progressive Rail, she took everything in. And before long, the company had a new purpose statement, new values, and a new three-year strategic plan, which was rolled out in November. In December, Savage moved Trinity’s headquarters from its longtime home on Stemmons Freeway to new space on the Dallas North Tollway. She calls it going from “me” space to “we” space.

“The progress that Jean and her team have made, especially when you consider the pandemic environment, has been nothing short of remarkable,” says Lel Echols, Trinity’s board chairman. “She completed an organizational redesign and continued the cost-optimization efforts we had going on; she essentially restructured the company. She also helped rebuild and refresh our board.

For Savage, that means exploring tech opportunities in the rail industry (much like she did with mining at Caterpillar), gaining market share, evaluating new products and services, and keeping her eyes open for more international plays.

Trinity’s early days were spent in a mule barn. Now, the railcar giant has a market cap of $3.6 billion.