Steve Miff is the president and CEO of Parkland Center for Clinical Innovation, a nonprofit healthcare analytics R&D organization affiliated with Parkland Memorial Hospital. Throughout the pandemic, PCCI has been instrumental in providing North Texas municipalities and hospitals with advanced analytics used to manage COVID-19. Originally from Romania, Steve and his father left their home in 1987 to start new lives in the United States.

“We lived in a town called Alba Iulia, which was the capital of Romania under the Roman Empire. It was a great childhood from my perspective, but it was under communism. Both my parents were physicians, so when the government started arresting anybody that was a bit more successful, my parents became nervous and thought about whether or not we should try to get out. Through their medical practice, they had connections to some high-level individuals who were able to help them get visas to visit the U.S. But even with those connections, the officials basically said, ‘You can have two visas. One of you needs to stay back to make sure that the other two return.’ 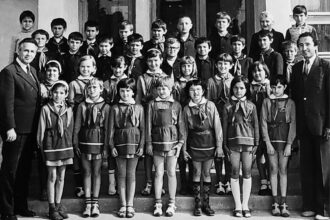 School Days
A young Miff, second row from the top, fourth from left, during his fourth-grade graduation.
Courtesy of Steve Miff

“They decided it would be best if my dad and I went first. We could only pack a couple of suitcases because we were pretending to go for a two-week visit. I remember my dad sewing his diplomas inside the liner of his luggage so that he would have the documentation he needed to practice in the U.S.

“We landed in New York then made our way to Chicago, where an uncle of mine was living. We applied for political asylum on the first day, and within 30 days, we had our green cards. Because of the political situation at the time, the U.S. government was quick to welcome anyone who was able to get out of an Eastern European country. Then, we applied for my mom to come.

“In the meantime, my dad studied for his equivalency exam, and I started high school. On my first day, I was so nervous that I actually asked my dad to come with me on the school bus. The driver looked at us so funny, but he didn’t even know what to say. Three or four months later, we moved, and I switched schools. I joined the tennis team and the soccer team, which helped me make friends right away, and every day became easier.

“When we were in Romania, we did pretty well, relatively speaking; we never worried about money. Then we came to the U.S. and didn’t really have much. But those were some of the happiest times because it brought us so close together.”

“My dad and I got jobs painting apartments. We ended up doing that on the side for several years, just to make ends meet. Neither one of us spoke much English. I knew a few things, but my dad didn’t know anything. Then we both got hired at Domino’s Pizza. My dad delivered pizzas, and I made the pizzas. To this day, I still order Domino’s Pizza all the time because it’s so special to me.

“When we were in Romania, we did pretty well, relatively speaking; we never worried about money. Then we came to the U.S. and didn’t really have much. But those were some of the happiest times because it brought us so close together.

“Eventually, we started to be successful again. It took a lot of hard work but also a lot of luck. I think we probably had some of both. Having the opportunity to start over and make something of it almost feels like I’ve lived two lives in one.

“My mom made it to the U.S. in 1989, just a few months before the revolution in Romania happened. My parents opened up their own medical practice in Illinois that the two of them ran for the past 30 years. This year, they closed it down and moved from Chicago to Dallas, where they can see our daughter, their only grandchild, more often. It’s been a fantastic journey. I feel so blessed to be where we are.”