Texas surged past California in the late 1990s to emerge as America’s No.1 exporting state, and it just continued to build its lead over the next quarter-century. In 2019, overseas sales hit an all-time high of nearly $329 billion, far ahead of runner-up California’s $174 billion.

In 2020, the COVID-19 pandemic staggered global commerce, and Texas exporters took their lumps, just like everyone else. The state’s shipments finished the year 15 percent behind the 2019 total—a bit worse than the nation’s 13 percent. If the pandemic fades and normalcy returns, Texas exports should rebound this year, but what happens beyond that? Will exports still deliver the same kick to economic growth?

There are reasons for doubt. Texas exports depend on the health of foreign economies, and COVID-19 will linger or recur in some places, making the economic recovery uneven. Perhaps more important, Texas exports are intertwined with what’s happening in energy markets and politics. Oil, natural gas, and coal supercharged the surge in Texas exports over the past decade or so, and they’re facing iffy prospects.

Texas isn’t in danger of losing its place as Export King among states—its lead is too big. The concern centers on slowing, or even sagging, export growth and its impact on the Texas economy.

COVID-19 took its highest toll on the biggest and closest markets for Texas exports. In 2020, the state’s sales were 18 percent below 2019 levels for USMCA-partners Mexico and Canada. Together, they usually buy 40 percent of what Texas companies sell abroad. Texas exports to Latin America outside of Mexico declined 23 percent. The losses topped 12 percent for Europe and approached 8 percent for Asia. In dollar terms, Texas lost almost $20 billion in Mexican sales, dwarfing the $5.3 billion hit in the Canadian market. Exports to nearly all countries fell—with one eyebrow-raising exception: China purchased $6.6 billion more from Texas in 2020 than in 2019. The biggest driver? Oil and gas, of course.

According to Census Bureau data, Texas merchandise exports have been rising at an annual average of 10 percent – from $129 billion in 2005 to $329 billion in 2019. At the same time, gross state product grew by slightly less than 6 percent a year – so exports have been pulling the state economy forward, rising from 13 percent of total output in 2005 to almost 18 percent in 2019.

How much Texans earn from exporting depends on factors beyond their control—how fast other countries grow, the openness to trade, prices on world markets. The pandemic took a toll on global GDP, one larger than the 2009-10 financial crisis. It will take a year and maybe longer to return to levels that supported $329 billion in Texas exports in 2019.

The World Bank’s annual Global Economic Prospects, published in January, forecast a healthy rebound in growth this year—4 percent for the global economy as a whole, assuming some progress in tamping down the pandemic. The sobering side of it: The hypothetical 2021 GDP gains don’t quite make up for the actual loss of 4.3 percent in 2020.

Now take a look at Mexico, the destination for almost a third of Texas’ exports. Hard hit by the pandemic, its economy shrank 9 percent in 2020, and the World Bank doesn’t expect the country to recoup the losses and return to 2019 levels until 2023. China will lead the world in growth over the next few years, the World Bank says, but it won’t entirely make up for Mexico’s slack.

Even with the trade-hawk President Trump out of office, policy isn’t likely to reprise the market opening mania of the 1990s and early 2000s. The United States, Mexico Canada trade pact—the USMCA—is a done deal, and Texans needn’t worry about their two biggest markets. However, countries trying to preserve industries and jobs often figure reducing imports will help, so the threat of increased protectionism seems greater than the prospect for progress in reducing trade barriers.

Over the past 15 years, a period coincident with the fracking boom, two broad categories—oil and gas and petroleum and coal products—have fueled growth in Texas exports (see chart). Fossil fuel sales accounted for more than half of Texas export gains from 2005 to 2019. Without the two categories, export growth would fall below 5 percent. 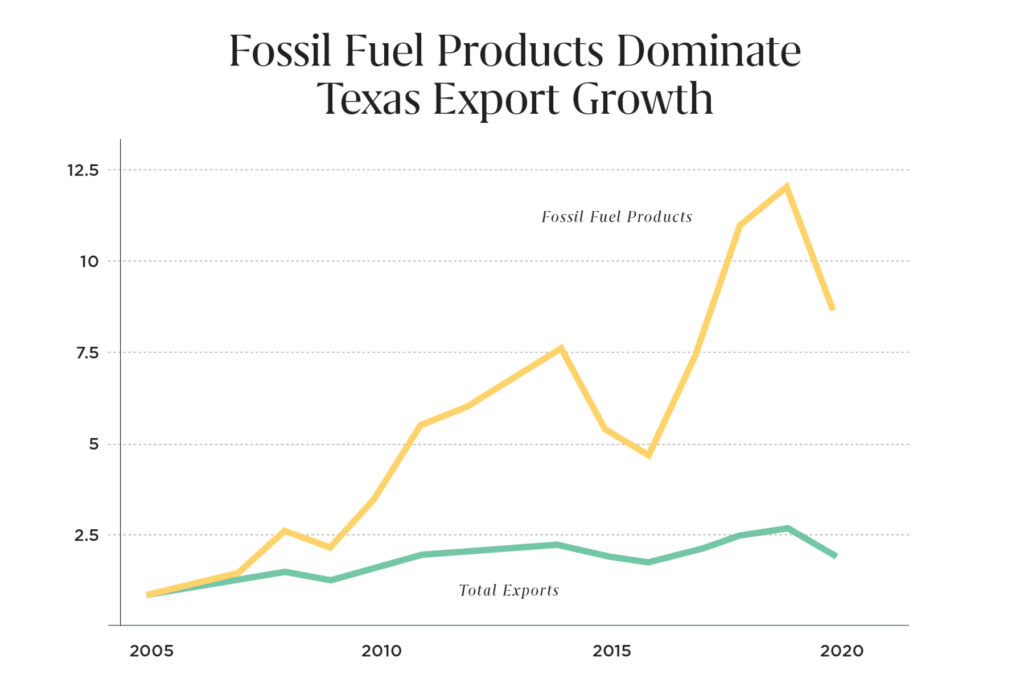 In “The Energy Industry’s Next Disruption,” our April issue column, we identified three challenges facing Texas’ signature industry: global overproduction that depresses prices, rapidly declining costs for wind and solar power, and climate change policies aimed at penalizing fossil fuel consumption. Nothing much changed in the pandemic year, except now President Biden is in the White House, campaigning against global warming.

To spur overall growth, the state could ship out other products, but the data suggest this won’t offset declines in fossil fuel exports. From 2005 to 2019, they soared by 74 percent a year, and no other category matched that growth rate over the period.

Only beverages and tobacco (60 percent a year), furniture and fixtures (15 percent), and miscellaneous manufactured commodities (13 percent) grew at above 10 percent average rates in 2005-19. In dollar terms, all are far smaller than the fossil fuel categories.

The future isn’t all dire. Texas will still export large amounts of fossil fuels. The state retains export categories that bring in big bucks, including computers and electronics, chemicals, and transportation equipment.

For the economy writ large, the issue is whether exports will be strong enough to drive growth. If exports falter, the Texas economy will need to develop other growth engines over the next decade or so. Fortunately, adapting to changing times is what Texans do best.

Michael Cox is a professor of economics and Richard Alm is a writer-in-residence at the Bridwell Institute for Economic Freedom at Southern Methodist University’s Cox School of Business.