Madhuri Andrews grew up in India but moved to the United States to attend college—and stayed for good. She’s now a top executive at Dallas-based Jacobs, a global company that has more than 52,000 employees and generates about $13 billion in annual revenue. Here, she shares her journey: 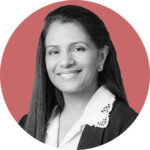 “I was born and raised in New Delhi, India. My dad held senior positions in the government, and my mother was a Ph.D. My siblings and I always knew our parents would move mountains to give us the best education that they could afford. Because my mother was teaching at a university, we lived on campus.

“I played basketball and ran track competitively for our school. When I was in kindergarten, I wrote an essay about wanting to be an aerospace engineer. I think it was just my love of watching airplanes. When I got older, I took the leap and moved to Los Angeles to attend school.

In the Middle With both an older and younger sibling, Andrews (left) says being the middle child has its benefits.
Courtesy of Madhuri Andrews 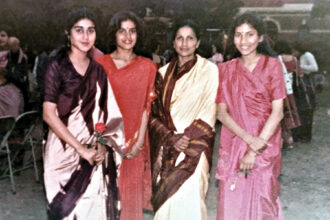 Adventure Awaits Andrews (above, second from left), came to the U.S. after graduating from high school.
Courtesy of Madhuri Andrews

“There were a lot of people back then trying to talk my parents out of it, saying, ‘How can you send a young female to the U.S.? She’s single and 19.’ But my dad was always ahead of his time, and he said, ‘If she wants to try it, we’re going to let her try it.’

“My parents ended up buying me a one-way ticket, and I arrived in America with $500 to my name. I had never even been on an airplane before. I carried more than a full load of classes at Northrop University and earned two degrees in three years. I found jobs that would fit my schedule. I cleaned houses, I ran a shuttle bus at the airport, and I worked as a security guard at night in Beverly Hills. I could do my homework and study. It was the perfect job for a student.”