For Tenet Healthcare CEO and Executive Chairman Ron Rittenmeyer, pandemic calls began at 7 a.m. each morning, finishing up at 9 p.m. or 10 p.m. On the other end of the line were physicians, hospitals, surgery centers, and government regulators.

“I probably have talked to every senator in the United States,” Rittenmeyer says, only half facetiously. The leaders wanted to know what the hospitals were experiencing on the ground. New systems had to be created to track total patients, personal protective equipment supply, COVID-19 tests, available beds, deaths, and more. “It was intense and constant. We joke that our weeks consisted of yesterday, today, and tomorrow, right? Because it kept rolling, and it didn’t stop. It was seven days a week.”

The coronavirus threat didn’t intimidate Rittenmeyer. In his varied career, which includes top posts in industries as diverse as railroads, snack foods, and truck rentals, he has helped thriving companies experience exponential growth and guided others through bankruptcy. Not one to shy away from a challenge, he is well suited to lead a healthcare company through a global pandemic.

Rittenmeyer’s humble beginnings make his leadership roles at PepsiCo, Ryder TRS, Electronic Data Systems, and others before Tenet all the more unlikely. Raised in northeastern Pennsylvania, his father drove a food truck for his own distribution company and worked as a printer. The two jobs kept him busy from dawn until midnight. Ron remembers getting up at 6 a.m. and tagging along with his dad on truck routes during the summers, making deliveries.

In summers, Ron would hitchhike to the beach to work as a lifeguard. After graduating, he put his head down and worked to do his best at whatever task lay before him, using his managerial skills to improve performance wherever he went. When he joined Frito-Lay in 1974, he started as a shipping manager then worked his way up to hold multiple vice president roles in the 1990s. A company man for nearly 20 years, his career was about to take a turn.

In 1994, he was introduced by a friend to the chairman and CEO at Burlington Northern (now BNSF), who spoke with Rittenmeyer about an opportunity at the railroad. The CEO asked how much longer he wanted to be at Frito-Lay; Rittenmeyer said about 15 years. The CEO then asked if he wanted a different challenge. Rittenmeyer hadn’t considered leaving, but on the drive home from the meeting, made a decision that would guide the next few decades of his career. He joined the railroad and led its merchandising unit before quickly being promoted to COO. 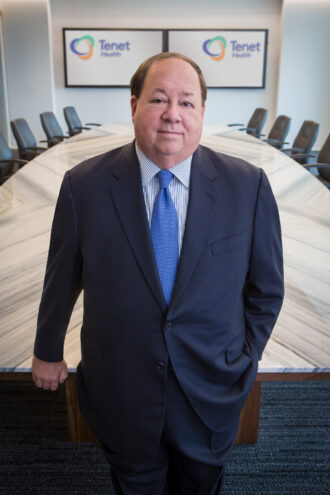 Ron Rittenmeyer has taken a place at the head of many a boardroom conference tables, but leading a hospital company amidst a pandemic has been a unique challenge.
Courtesy of Tenet Health 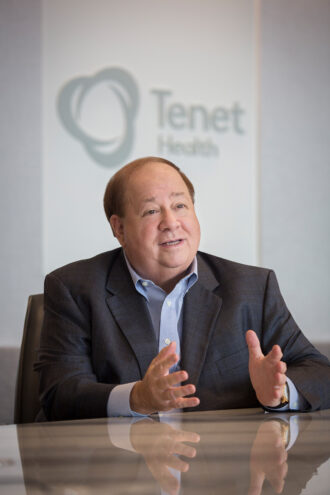 From that point forward, Rittenmeyer served in numerous C-Suite positions at various companies, rarely staying more than four years at a time. He helped spin-off companies, launched IPOs, turned around performance, and walked numerous companies through bankruptcy filings. Although he rarely took a job knowing it would be a short-term assignment, the call of a new challenge was often too difficult to ignore.

Even at 73, Rittenmeyer has a spring in his step and an appetite for new challenges that make him right at home in what many might consider stressful situations. His collection of fast cars, pilot and boat captain licenses make sense given the laser focus on efficiency and quality that he brought to Tenet when he was hired as CEO in 2017.

A conversation with Rittenmeyer is simultaneously intimidating and friendly. One chooses their words carefully but also knows that those words are being honestly considered, listened to, and acted upon. His accent still has a hint of his Pennsylvania upbringing; he tends to punctuate sentences with a rhetorical “OK?” or “right?” to make sure he has an engaged audience. Sir Bill Thomas, who worked with Rittenmeyer at EDS, says the CEO focuses on putting people first. “Ron’s philosophy was that if we looked after our people properly, and if we looked after our clients properly, the rest would sort itself out, and we’d end up doing a good job for our shareholders as well.”

When Rittenmeyer was the chief executive at EDS, the company was the title sponsor of the Byron Nelson Championship golf tournament, which is hosted by the Salesmanship Club of Dallas and benefits Momentous Institute. When the club asked for volunteers to renegotiate a sponsorship contract with EDS, no hands went up; Rittenmeyer was known as a tough and aggressive negotiator. Former Addison mayor Todd Meier, who knew the EDS chief through their children, was tasked with the job. It turns out the worries were unfounded; Rittenmeyer not only saw the value of the sponsorship and the charity, he also put his negotiation skills to work with the PGA Tour to lock in the preferred dates. “Although one role he has is an almost steely-eyed businessperson who can be tough where necessary, he backfills that with a strong sense of compassion and warmth,” Meier says. “A lot of folks are one or the other, and Ron combines them.”

In 2019, Tenet Healthcare was performing about as well as it ever had. Rittenmeyer had replaced and diversified much of the leadership. Before his arrival, the executive team and board were mostly White men; today, both are made up of 50 percent women and minorities. The company had just taken occupancy of a new headquarters along the Dallas North Tollway in Farmers Branch, filled with amenities and natural light. Things were going better than expected.

But then the pandemic arrived. Tenet’s hospitals have been in the center of some of the COVID-19 hot spots around the country, with facilities in Arizona, Miami, and Detroit. Still, they were never overwhelmed to the extent New York City experienced. Because of the pause of elective procedures, admissions dropped 30 percent in April, across the system. The hospitals had to remain open and fully staffed, ready for a potential onrush of cases, pinching the company from both ends.

“Traffic went away overnight,” Rittenmeyer says. “People were afraid to go out and get any medical treatment. So our business just folded overnight, just like that.”

In April, with all of those pressures mounting, Rittenmeyer and Tenet made the difficult decision to furlough 10 percent of its 113,000-member workforce. He didn’t take the decision lightly; Rittenmeyer has a history of making tough calls, turning businesses around, and doing what is best for the company.

“He takes charge, and he doesn’t blame problems on somebody other than himself,” says former Nebraska Governor and U.S. Senator Joseph Robert “Bob” Kerrey, who is on Tenet’s board of directors. “He takes responsibility for what he is doing and treats people well.”

Despite making progress at Tenet Healthcare, the company and Rittenmeyer have been criticized from the rank and file. In September 2019, 6,500 Tenet nurses at 12 facilities in California, Arizona, and Florida staged a one-day strike protesting working conditions and pay. In April 2020, The International Brotherhood of Teamsters, whose pension and benefits funds invest in Tenet, urged the company’s shareholders to reject Rittenmeyer’s compensation and described a lack of accountability and other high executive salaries.

“We joke that our weeks consisted of yesterday, today, and tomorrow, right? Because it kept rolling, and it didn’t stop. It was seven days a week.”

Tenet’s “CEO to worker pay ratio of 452:1, based on CEO Rittenmeyer’s $24.3 million 2019 compensation, could not be worse for a publicly-traded hospital chain amid the current pandemic,” wrote Ken Hall, general secretary and treasurer of the Teamsters in a letter to shareholders. Most of the $24.3 million cited is in stock grants that Rittenmeyer is unable to vest, and, during the height of the pandemic, was worth less than half of the original $16 million value. Shareholders approved his compensation in May.

Rittenmeyer is tough when he needs to be, but his lighter side endears him to many who have worked with him.

“The first thing to understand about Ron is that he takes work extremely seriously, but he doesn’t take himself seriously,” says Thomas, recalling an EDS skit in which Rittenmeyer played a character at a bar who was slowly turning into a pirate every time the camera cut back to him. “He will take very difficult situations, and he’ll make them tractable by the use of good humor at the right time.”

The CEO’s impact on Tenet is measurable. Before the pandemic, the company’s stock price had nearly tripled since he took over in October of 2017. Additionally, he has reduced annual expenses for the company by $400 million while improving quality, according to Kerrey, who is optimistic about Tenet’s future under Rittenmeyer.

Rittenmeyer signed a contract extension that runs through December of 2022, at which point he says he will be done at Tenet. But for the man who has his office phone rerouted to a line at his lake house to make sure he doesn’t miss a call, chances are he will find a new challenge.

What will he do when his contract at Tenet is up? “I don’t know,” he says. “We’ll see how I feel. If I feel good, I’m sure I’ll go do something else. I can never believe that I will retire and play golf.”