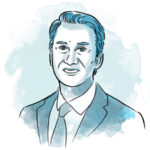 “I was born and raised in Vienna, Austria; I was the oldest of four siblings. My mom was at home and my dad was a physician. He had a general practice in downtown Vienna, with a radius of about three blocks where people would come to see him.

“When I was 18, I participated in a Rotary Club exchange program for the summer. Our first stop was South Carolina. It was pure excitement to be in America and see how different things were. People had so much more of everything, in general. They lived in beautiful homes with their own yards. That’s not a typical way to live in Austria unless you live in the countryside.

“My second stop was Texas, in Tyler. My future wife’s dad was a Rotarian, and they hosted one of the girls in my group. There were some activities we did together, and that is how Beth and I met.

“I was going to travel back from New York to Europe, but instead, I pushed it out a week and accepted the invitation of my future in-laws to stay at their house. Beth and I were head over heels in love.

“We were separated for eight years, seven of them transatlantic. We spent Christmas and summers and whatever other breaks occurred with each other in Austria and Texas and worked odd jobs to buy plane tickets. We got married in 1995 in Santa Fe, and we spent our first married year apart while Beth was a second-year med student at UT Southwestern. I moved here in July 1996, right after graduating from medical school.”

The Healthcare Arenas That Will Command Investor Attention in 2018