Voices of Boom and Bust

Some of the area's most prominent oil and gas experts talk resilience, innovation, and optimism in the face of one of the most volatile cycles in a lifetime.
By Will Maddox | November 16, 2020|11:00 am

“Will trade oil for toilet paper.” So read a marquee outside an office building in downtown Midland on April 20, 2020, as the perfect storm of oversupply and pandemic-induced reduced demand took hold of the oil and gas industry. On that day, producers watched in disbelief as the oil futures price fell to -$37.63 on the New York Mercantile Exchange. For West Texas Intermediate, the posted price dropped as low as -$41.25. The sign usually displayed the price of oil, but it wasn’t programmed to go negative. The gallows humor messaging seemed appropriate, as oil prices were, indeed, in the shitter.

What exactly does a negative price mean, and how did it impact oil and gas operations here in North Texas? It may be a surprise that many of the region’s oil leaders have taken this year’s market volatility in stride. Although it may be the most exaggerated cycle many of them have seen, they didn’t get into the business because it was steady and predictable. The leaders of enduring oil and gas companies have to be agile and resilient. They pride themselves on their ability to see around corners to take advantage of new opportunities, find benefits where others don’t, and make tough calls for their companies.

Anyone who has been in the commodities business for any length of time knows that it is a cyclical and often erratic industry. In investigative journalist Ida Tarbell’s 1904 book, The History of the Standard Oil Company, she writes, “From the first, oilmen had to contend with wild fluctuations in the price of oil. In 1859, it was $20 a barrel, and in 1861, it had averaged $0.52. Two years later, in 1863, it averaged $8.15, and in 1867 but $2.40.” The price dropped 97 percent in the next nine years, increasing nearly 1600 percent post-Civil War and then decreasing almost 75 percent again.

“We always take a long-term view. I’ve been on this roller coaster for quite a while now, and I’ve been through the ups and downs. This [Latest one] is certainly significant. I’ve never seen prices go negative.”

“On one level, you could say, you’ve never seen anything like this before. On the other hand, the history of the industry is nothing but this kind of thing,” says Bill Keffer, the director of energy law programs at Texas Tech University. “It has been boom and bust cycles since its inception.”

The oil industry had yet to recover from the 2014-2016 drop when the price of crude dipped below $30. Before that, higher prices encouraged many newcomers into the business, especially as fracking technology turned previously dormant oil fields into productive patches once again. But when the prices dropped in 2014, only the companies that ran lean and weren’t overextended could be profitable.

Earlier this year, oil prices began to steady around $60 per barrel, but forces beyond the control of Texas oilmen began to tank the price. “Every time prices are finally kind of coming up out of the doldrums and doing well, Saudi Arabia starts ramping up production,” says Richard Denne, Director of the TCU Energy Institute. “And you inevitably get the crash on the other side of that. That’s just the boom and bust cycle that we’ve seen for the last 50 years.”

As the price drops, oil companies’ profits fall off a cliff, but the only way to make up for that loss in revenue is to continue to drill, which only floods the market even more. It is a constant Catch-22 for oil producers and makes these price drops challenging to weather. Maintaining positive cash flow, low overhead, and planning for the future are essential for times like these. The market was due for a price drop, but the pandemic was a catalyst for disaster. “The world was changing prior to 2020 when it came to the mineral space, and we were already starting to adjust. Then it really accelerated with COVID and the crash in oil prices,” says John Paul Merritt, CEO of Pony Oil.

It made headlines when the oil futures price went briefly negative in April, but many in the business weren’t panicking as much as hysterical media reports might have suggested. There weren’t many contracts purchased at the hostile prices, and the drop didn’t impact producers much at all. Traders and speculators were the ones who lost big.

That said, it wasn’t easy. Layoffs occurred. Bankruptcy filings rolled in. Rigs shut down. “It’s not been fun–I’ll start with that. When activity levels cratered, the industry was in a lot of turmoil. If people were over-leveraged, they were in a lot of trouble,” says Doug Dormer, chairman and CEO of Cardinal Midstream.

The Texas Oil and Gas Association tracked 53 companies statewide and found a reduction in capital expenditure of $61.5 billion in the last six months. The number of active oil rigs in Texas dropped from 404 to 106. In August 2019, there were 234,900 upstream oil and gas workers in the state, and in August 2020, that number was just 168,800–a decline of 28 percent. “It’s been disruptive to the families, and it’s disruptive to the men and women in this industry,” says Texas Oil & Gas Association President Todd Staples. “However, the bright spot is that the industry continues to deliver a product that citizens rely on every day.”

For some up-and-coming oil industry leaders, this bust has been defining. Although prices have recovered, in the moment, there were numerous unknowns. “It’s easy to look back now and see that we had hit bottom, but at the time, we really no idea where the bottom was,” says Bradley Williams, president and CEO of Elephant Oil & Gas. “No one could have imagined oil was going to go to negative $40.”

But even in the most volatile of cycles, solidarity remains among leaders in the industry. When so much is out of their control, they are not likely to gloat their good fortune when others suffer. “We have been on the other side of that,” says Jay Allison, chairman and CEO of Comstock Resources. “I’m sympathetic toward everybody because we can all change seats in a hurry.” 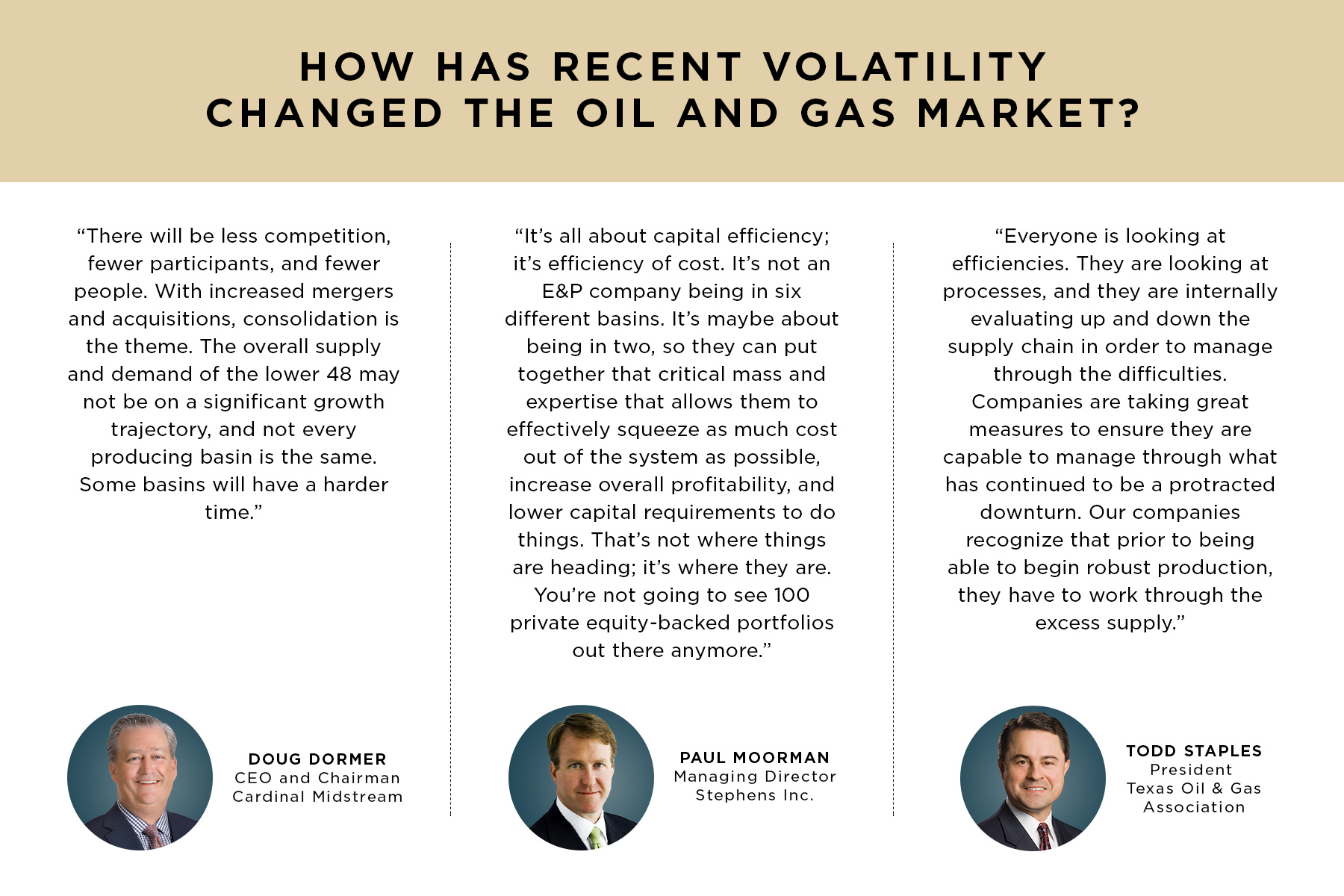 When the prices dropped, the choices were clear, if difficult. “Companies had two choices: Either go into bankruptcy or clean themselves up pretty quickly,” says Bruce Bullock, director of the Maguire Energy Institute at SMU’s Cox School of Business. Before the demand drop, there were already doubts about much of the shale oil industry’s profitability. Now, experts say, shareholders are more concerned with productivity and cash flow rather than growth. They want a return on investment, not just an increased market share. The price shock of 2014, though, foreshadowed what was to come, and many companies had already made the transition to being able to survive at lower prices. “We’ve been through numerous valleys. We have been on some mountain tops. But you remember the valleys more than the mountaintops,” Allison says. “Most businesses didn’t set up to grow at $40 oil. It’s a new business model now.”

For some, it meant transitioning their companies to maintenance mode rather than drilling new wells. For others, the low prices meant they had to be extra aggressive, putting together land deals, taking advantage of those who were exiting the business with the new prices. There was less oil to move for midstream companies, but the demand reduction meant that storage became a larger part of the business. Organizations that could diversify, lean on experience, and not be overleveraged were in an excellent position to survive.

But for some, it wasn’t enough. “There are many natural gas producers and independents that were worth billions five years ago that are worth next to nothing today,” says Trevor Rees-Jones, founder and CEO of Chief Oil & Gas. “The overhead structure in the oil and gas business is all out of whack from where the market is for the product. The pay scale is way too much.”

Oil industry executives are, by nature, an optimistic bunch. Although the swashbuckling, hard-living, gambling wildcatter of previous generations may have given way to more polished professionals today, some common characteristics remain; the most successful industry players are innovative and confident.

“The U.S. has always figured out a way to become innovative and productive… The U.S. oilfield service and supply industry is the premier energy technology industry in the world. And it will rise to the occasion.”

That less than ideal market may converge with increased social pressure to move toward cleaner energy, and oil and gas companies may be forced to adapt their model again. “Thirty years from now, the prominence of oil and gas to run the economy probably continues to get eroded,” says Paul Moorman, managing director at Stephens Inc. “With an upswing in solar and wind, I think you’re going to continue to see people try to leave their foot on that side of the line.”

The future might mean fewer players in the industry, with a greater focus on high-value properties, coupled with a lower cost structure. Industry experts predicted before the pandemic that worldwide oil consumption would peak in 2030 as electric vehicles and alternative energy sources become significant factors. “Is [COVID-19] going to change the timeframe?” Denne wonders. “Is it going to bring it forward? Is it going to push it back? How much do you want to spend on infrastructure for producing a commodity for which demand may start going down?”

Although there are still many questions, positivity abounds. “I am a very optimistic person,” Dormer says. “We are an industry full of problem-solvers, and the industry will persevere through the challenges.”

Heading into the oil bust earlier this year, conditions were as ideal as Energy Transfer CEO and Chairman Kelcy Warren had ever experienced. “In my 42 years of doing this, this was the most balanced market I have ever seen. Nothing had come close to this,” he says. There was market consistency, and the pipeline business was steady. When the demand disappeared as the economy shut down, supply built up, and producers had nowhere to put it. Energy Transfer has some of the largest storage capacity in the nation and was able to pivot quickly from moving the product to storing it. Even while making fast and difficult decisions, Warren knows that all eyes are on him. “People are studying you. They’re paying attention to how you respond, especially in a crisis. You really have no choice but to be optimistic, because everybody feeds off of that energy or lack of energy.” He, like many others in the industry, looks ahead to brighter days. “You can see the light at the end of the tunnel clearly right now.”

John Paul Merritt has been on a roller coaster of fame, success, and devastation on his way to founding Pony Oil. After being runner-up on season three of The Bachelorette, he had a series of financial misfortunes that left him bankrupt at 27. He considers himself a fighter, and he has built up Pony Oil to be a business that can thrive when the going gets tough. “As the prices came down, you had to be more sophisticated, more technical in everything you did. These factors have taken a lot of the competitors out of the market. In these current conditions, we are only seeing the best of the best survive.” Not one to get caught up in the race to the newest technology, Merritt prides himself on his resilience, building relationships, and thinking innovatively about how to put deals together. “My whole career, I’ve lived outside the box. The more uncomfortable it is for everybody…. that’s how I like it. There’s not much out there that scares me. I’ve been through it.”