For the partner at Lynn Pinker Hurst & Schwegmann, it all began in New Orleans' French Quarter.
By Christine Perez | May 20, 2020|9:00 am

Dallas attorney David Coale, a partner at Lynn Pinker Hurst & Schwegmann, was in New Orleans on business when he happened upon a fortune teller’s shop in the French Quarter. Out of curiosity, he decided to see what his future might hold.

“I concluded that she was full of crap,” Coale says of the seer. “She said things like, ‘I see you are concerned about your family.’ But I was intrigued by what she was attempting to do with the tarot cards.” When he got back to Dallas, he ordered a deck for himself.

There are countless varieties of tarot cards. The oldest known surviving set dates back to the 1440s. Coale owns three decks: Tarot de Marseille, created in France in the mid-1700s; Thoth Tarot, painted in the early 1940s (“abstract and a little too weird,” Coale says); and his favorite, Rider-Waite. The vibrant cards were drawn in the early 1900s by Pamela Colman Smith, under the direction of mystic A.E. Waite, and published by the Rider Co. The deck most often used in movies, its cards are vibrant and full of symbolism, Coale says. “They’re the most elegant and interesting at the same time,” he says. “They’ve stood the test of time.”

There are classes one can take to learn to read the cards, but a lot of information is available online for free, Coale says, so he decided to go the self-taught route. “You have to discover it for yourself,” he says. He began doing simple three-card readings for friends and family to gain experience before moving on to the more elaborate full spreads that most professionals do. These days, people at his firm will sometimes ask for readings, but no client as ever asked Coale to consult about a case.

“It’s a fun thing to do with the kids,” says Coale, a father of four children who range in age from 10 to 19. “Everyone can ask the spirits a question. Strangely enough, the least scholarly among them, amazingly, is always told to study more; it’s the darndest thing,” he jokes.

A typical tarot deck has 78 different cards with various suits and elements. They’re divvied up into the Minor Arcana, 56 cards that have to do with more day-to-day things, and the Major Arcana, 22 cards that relate to a major change or event in a person’s life. A tarot reader selects cards from the deck and offers the “querent” insights based on the card’s images and how they relate to one another. 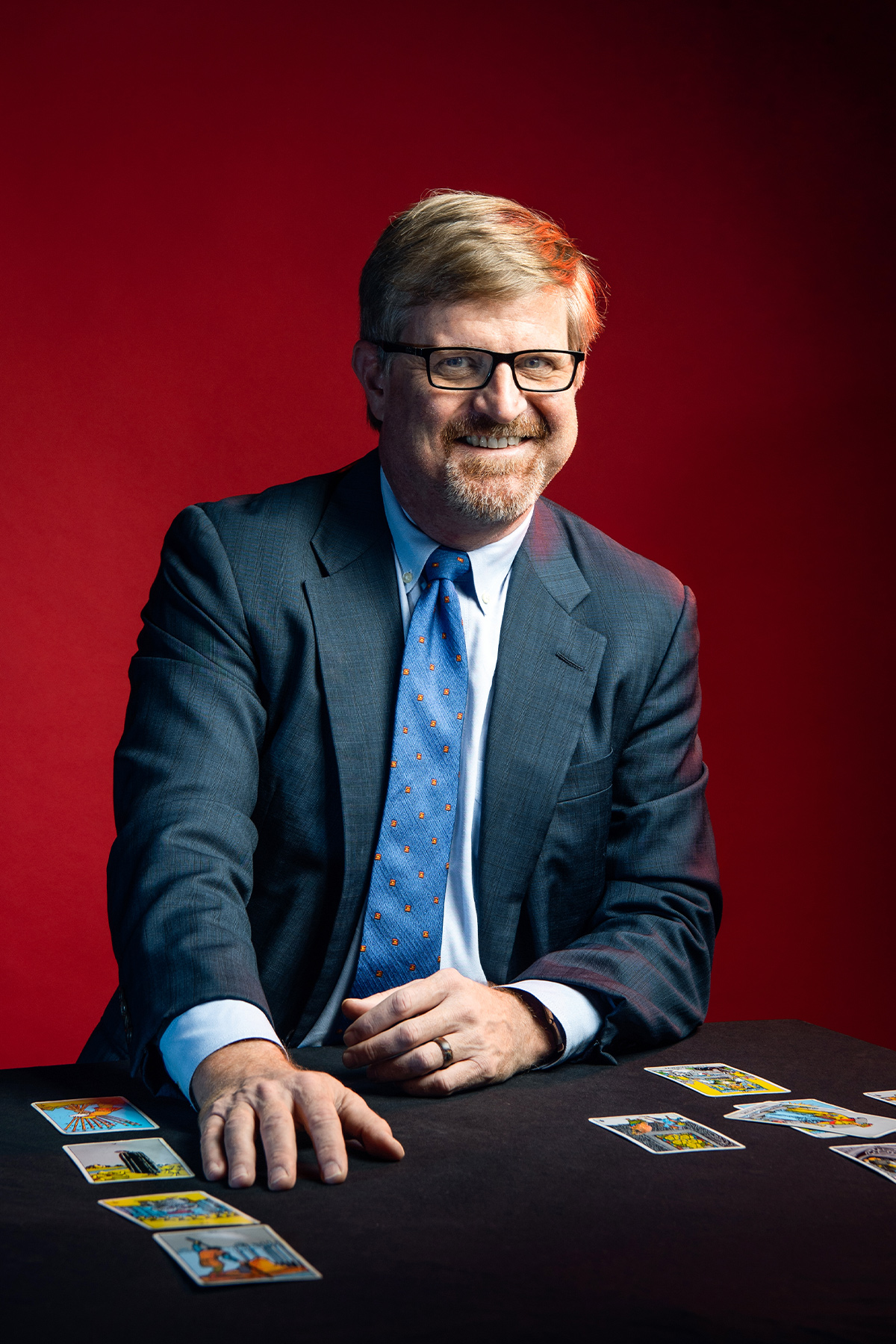 There’s nothing supernatural about the cards, Coale says. They’re just a tool for gleaning perspectives from your subconscious mind. It makes you more open-minded, he says. It also forces you to be still and thoughtful.

“It’s a fun hobby, and we all need hobbies—particularly in my line of work,” Coale says. “It’s totally different from what I do professionally, and there’s a rich history, plus the psychology angle.”

The cards also led the attorney to delve into art history. One time while on a trip to Santa Fe, Coale visited the Georgia O’Keeffe Museum and noticed that some of the artist’s works were evocative of images in the Rider-Waite tarot deck. He did some research and discovered links between O’Keeffe and the artist who painted that classic set. He wrote a scholarly piece on the topic for the online journal ArtHistory.us.

Coale says it’s interesting to see the reactions of people he reads for—especially the skeptics. If you do enough readings, there are invariably going to be coincidences, he says. His hobby, Coale adds, has made him a better listener.

“When I read for people, they aren’t expecting me to give them any magical insights,” he says. “It just makes me a more useful friend.”