Grand Time CEO Amir Meghani didn’t know he was moving to Texas when he first arrived in 1990. His father took the family on a tour of the United States, and when the family made it to DFW, he told them they were staying, taking everyone (including his wife) by surprise.

Soccer became a lifestyle for Grand Time CEO Amir Meghani, and he traveled the country to play in competitive tournaments. “Soccer became this extension of my identity within my friends and family,” he says. 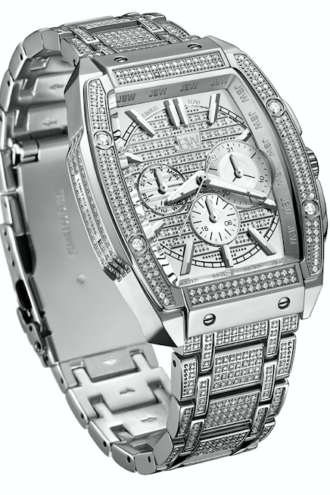 After school at NYU, he was on the verge of a lucrative consulting position when he chose family over career and came home and worked for his father’s retail watch shop in Dallas. He had come from a line of entrepreneurs in the watch market, but his father’s shop had fallen on hard times after a split with his brother. He said no to a promising consulting career and decided to help his father out, taking a job in his retail and wholesale watch shop on Harry Hines in Northwest Dallas. “I feel like everything kind of happens for a reason, and in the beginning was super stressful,” Meghani says. “But, I think that’s what molded me into becoming a purebred entrepreneur.”

As his entrepreneurial spirit took hold, in 2008, he convinced his father to take a chance on purchasing a few hundred luxury watches popular among hip-hop artists. It would eventually be his first company, JBW.

He began marketing the watch to local musicians and influencers, making friends at the radio stations, and bringing watches to the station when they would have a famous guest on. Eventually, he got them on the wrist of Cowboys great Deion Sanders and rappers Rick Ross and Lil Wayne.

“It was a very hustler mentality, but I didn’t know exactly what I was doing,” Meghani says. “I was just trying to figure it out.”

He then co-founded Breda with his sister Shabeena. The more understated brand took off around 2014, and last year both brands saw 40 percent growth year-over-year. The company employs 25 people in the Dallas office, and partners with retailers Nordstrom’s, Macy’s, Urban Outfitters, and more.

Throughout it all, the beautiful game has been a stress reliever with helpful social and business connections. Meghani still plays a few times a week, both indoor and outdoor soccer, giving a moment to clear his mind, get exercise, and just be in the moment. But it isn’t all fun and games. Teammates have accounted for real estate guidance and connections to marketing consultants. He knows he can’t play forever and wants to enjoy the beautiful game while he still has the legs to do so.

“You are in the moment, with the homies, and having fun,” he says. “It can be a huge stress reliever.

Texas-OU Watch Party at The Rustic