Ask Hunter Pond what he’s good at, and the 32-year-old restaurateur will give you a quick response: making money.

“That’s ultimately the message we perpetuate and what we are known for,” he says. “It’s tough to make money in the restaurant business, and we know how to make money—and we’re having fun doing it.”

Since opening his first East Hampton Sandwich Co. in Snider Plaza in 2012, Pond has turned a $400,000 investment into a company that’s expected to generate more than $32 million in revenue this year. Leveraging a passion for travel and researching food trends, Pond has filled some gaps in the local dining scene, growing beyond sandwich shops to include raw bars (Hudson House) and an Old Hollywood-style steakhouse (the just-opened Drake’s).

Up next: Pond and his Vandelay Hospitality partner, Kyle Brooks, are bringing the taste of Nashville hot chicken to Old East Dallas.

What's in a Name?

“When my business partner, Kyle Brooks, came in and bought out my former partner, it was such a godsend that when we were sitting there talking about what we were going to rename the company, we said we always wanted to remind ourselves to have fun. When we were in college, we watched a crazy amount of Seinfeld and still to this day drop a number of one-liners from the show. [Vandelay Industries was a made-up company where Jerry Seinfeld and George Constanza once purported to work.] It’s incredibly special to Kyle and me, and it allows us always to remember that we were friends first.”

When he first opened East Hampton Sandwich Co., media reports made much of the fact that Pond was a law school dropout who once washed dishes at Eno’s Pizza Tavern. What those stories left out, however, is that he graduated from Texas Tech with a degree in entrepreneurship and never aspired to practice law. “When I decided to go to law school, it was merely because I graduated from college in the middle of the recession and there were no jobs to be had,” he says. “It was bottom-of-the-barrel pickings.”

Once in law school, he didn’t feel the fire he thought he would. In fact, he was miserable and didn’t want to suffer through contracts and torts if he wasn’t going to practice law. His parents, who had sacrificed to give him an educational foundation in the Park Cities, weren’t pleased. Still, Pond quit law school, moved home, and began writing a business plan for a restaurant that sold made-from-scratch sandwiches. Thanks to his entrepreneurship studies, Pond knew how to organize operations and crunch numbers. And thanks to a nearly universal love of meats and cheeses stacked between fresh bread, he figured he had an idea that would catch on. And he was right.

“Louie’s on Henderson. There’s no doubt about it. My family’s been going there for years, and it’s just classic. I also love Gabriela & Sofia’s, a Tex-Mex hole in the wall off of 75 and Meadow Road in this nondescript shopping center. But that’s the best brisket tacos in town. I am 100 percent positive. I will formally debate anyone on that.”

He also knew his business-first approach would serve him well. “That’s a tricky area where a lot of young people in the restaurant business get caught,” Pond says. “They have a strong imagination and a strong base of culinary knowledge; however, the business side of things is incredibly different and more complicated and uses a much different side of your brain. That’s one of the fortunate things for me. I was better at that side than I was the creative side. Once I was able to home in on the creative side of it, it gave me a dangerous combo. That’s why the original East Hampton worked out. And that’s why investors, when I was raising money, bought in—because they could tell that what I lacked in experience I made up for in business knowledge.”

That doesn’t mean mistakes weren’t made or that his youth wasn’t a factor. After all, how many 24-year-olds are launching their own real estate or restaurant enterprises? Pond’s strategy was to start small—with that first sandwich shop in 2012—and build his reputation. By the end of 2019, he had eight East Hamptons, two Hudson Houses, and the newly opened Drake’s. He also had plans for the chicken shack.

Pond acknowledges that his Highland Park upbringing gave him a leg up. Not because he came from a wealthy family—he didn’t—but because the opportunity to have access to influential neighbors is one of the advantages of living in the area. The relationships he formed have been important, Pond says. “And I have to give credit to that. Whenever I was starting off, I had a business plan and about $2,000 in my checking account and went out to raise money. Most people who don’t have those sorts of introductions—people like to use the word ‘connections’; I think it’s a tacky word. It’s really an introduction, and then you’re lucky to get a coffee, and then you’re lucky to get a follow-up meeting. I mean, it’s a grind. I bootstrapped that sucker,” he says, laughing.

Although much of Pond’s and Vandelay Hospitality’s success can also be credited to a knack for bringing trendy concepts to food-obsessed Dallasites, the young entrepreneur has been careful to consider the counsel of an all-star list of mentors, including former Brinker CEO Doug Brooks and Ray Washburne, owner of Highland Park Village and Mi Cocina-parent MCrowd Restaurant Group. The two, he says, took him under their wings early in his career and provided candid advice. Pond fondly remembers the day Washburne walked into East Hampton Sandwich Co. and shook his hand. 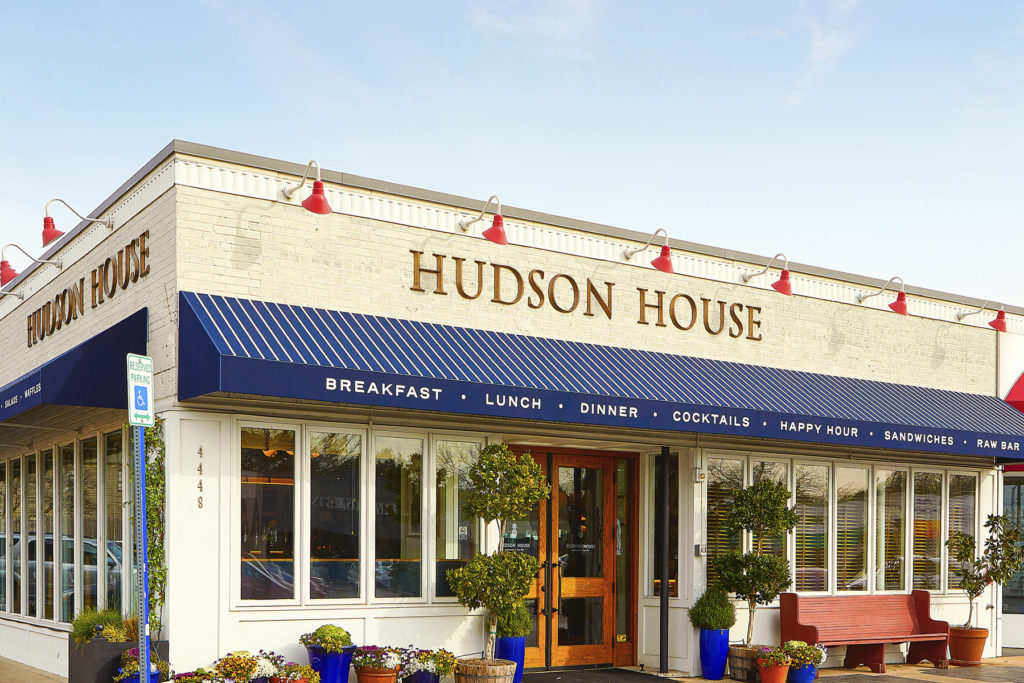 Hudson House debuted in 2017 in Highland Park. A second opened in Addison, and one in Lakewood is coming soon.
Justin Clemons

“He was very kind to me and opened his door and told me to reach out if I ever need any advice,” Pond says. “It’s easy to find people who have this-is-what-I-did, don’t-do-that advice. It’s different for someone to go to multiple lunches with you, multiple breakfasts, have you over to their home, and really open their arms to you. Those relationships are incredibly rare, and I’ll always be indebted to those two guys for that.”

Although he hasn’t heeded every recommendation, Pond says he holds fast to input, especially when Brooks told him not to follow tradition too closely or shy away from forging his own path. “A constant thing he always told me was to push the envelope and be creative. Don’t always try to look at my career or anyone else’s career and play it by the book. But, at the same time, be careful. It’s like, be aggressive, but be careful; it sounds like an oxymoron, but it always rings true.”

Vandelay Hospitality’s sales, which have been brisk from the start, continue to gain momentum.

With his hospitality group flourishing, Pond says he didn’t always listen to institutional guidance like location matters and don’t grow for the sake of growing. “My biggest mistake early in my career was not heeding that advice,” he says, referring to the closing of two East Hampton Sandwich locations at Montrose and The Star. “And, I’ll be honest, we made a lot of silly mistakes negotiating leases early on, too. Fortunately for us, they didn’t become problems because our stores were doing well. But in hindsight, some of the deal terms we negotiated in terms of personal guarantees and silly stuff like that, I wish I had back, just because I know that we were taken advantage of.”

When it comes to the next project, Pond says he always looks to first determine if an idea will resonate in Dallas. After a trip to Los Angeles, where he fell in love with the vibe of old-school steak lounges, he knew the concept would interest his friends and the Bluffview neighborhood where he parked Drake’s. It is nothing like the already thriving classics, he says. “There are Nick & Sam’s, Al Biernat’s, and Bob’s—the iconic steakhouses I love and respect and have grown up with—I don’t want to compete with them. But [Drake’s] is not what they do. … The focus isn’t about 96-day dry-aged wagyu from Australia, corn-fed and massaged-by-monks steak. It’s just a damn good steak that’s USDA prime. And we’re not overcharging anyone. It’s really a party. And that’s what I wanted, especially living in the area.”

The same can be said for Lucky’s, his Nashville hot chicken concept that will open this spring on Gaston Avenue in the heart of Old East Dallas. This will also be Vandelay’s first time to purchase the land beneath the building—an idea Pond says will allow the company to pivot should the restaurant fail. “Even if the hot chicken is only a fad—it turns out to be the next poke—at least we own the real estate, and we can make a move,” he says. “The other players who will be leasing their spaces, they’re not going to have the same opportunities.”