Tony Joseph aims to establish McLaren in North America for the long haul. As he transitions his team from its former home base in New York, the automotive industry veteran has turned his attention toward the future.

Joseph, who was employee No. 1 when the brand relaunched in 2011, says Dallas was one of two preferred locations identified by a KPMG search. Ease of travel—there are now 27 dealerships to tend to across the United States and Canada—was among the factors that tipped the scales. “Coming here and visiting Dallas a few times, it became a no-brainer for me,” he says.

Joseph also notes that the new facility, located in 30,000 square feet in Coppell, is six times the size of the one in New York—at roughly the same price. Sales have grown by double digits every year since 2011, when McLaren sold its first car under the brand relaunch. It grew 12 percent from 2018 to 2019. So it’s time to staff up.

“We literally have fewer employees than we have dealers right now,” he says. “We need to continue to grow our team.”

A move became imperative because of how McLaren is growing, as well. For one, there’s suddenly a preowned market to serve. Plus, future growth will come in part by better serving the 7,500 existing stateside McLaren owners. Ultra-luxury car buyers tend to expect better regular service than what your run-of-the-mill car company might provide. But they also tend to want to gather and talk about their vehicles, test them out on a track, and hear about what they’re capable of.

“What we see is our customers are very much into the events, the lifestyle component of the brand,” Joseph says. “They want to get together with each other; they want to talk cars; they want to do track events.”

A big part of any luxury brand’s allure is exclusivity, and Joseph says the company has no plans to add manufacturing, even as it nears the capacity of the 6,000-car capabilities of its plant in the U.K. “The goal is always to have one less than the market wants,” he says. “We’ve had some successes, and we’ve slipped a little bit.” 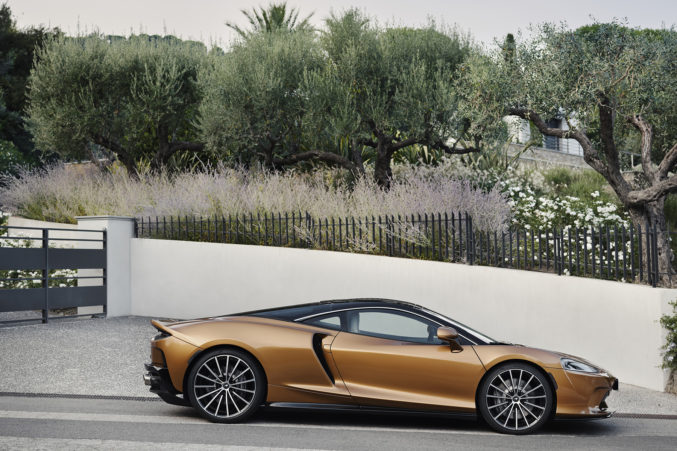 The new McLaren GT debuted at the Geneva Motor Show in May 2019.
Courtesy of McLaren Automotive

Even with production inching toward capacity, McLaren did announce a new ride in 2019. The GT, which sits just a few feet from Joseph on this day inside a Park Place dealership, has something no other McLaren does. It can fit your golf clubs. “It’s a brand-new segment for us,” he says. “It could literally be an everyday driver.”

Which means you might see more McLarens on Dallas streets soon. The city has been aware of the brand as long as any—Dallas was McLaren’s top market by sales in 2013, its second full year in business. (Today, it remains in the top 10.)

“I’m excited about the move to Dallas,” Joseph says. “New York, when we launched, was a good place to launch. There’s no question we outgrew that market—we were in a high-rise. The new facility allows us to better support the network as a whole.”