Some of the most successful leaders in Dallas-Fort Worth Real Estate just happen to be identical twins.
By Bianca R. Montes | March 5, 2020|10:00 am

Working with family has its challenges. Imagine doing it with your former wombmate. We talked with four sets of identical twins who have embraced their status as multiples while making a name for themselves in the competitive landscape of commercial real estate. Whether it’s developing residential communities like Phillip and Don Huffines or commercial projects like Fort Worth sisters Jessica Miller and Susan Gruppi; negotiating deals like Cushman & Wakefield brokers Dean and Mark Collins; or doubling their networks while at competing firms like De’ On and De’Juan Collins, the synergy these siblings share is a powerful tool that has propelled their careers.

De’ On and De’Juan Collins

De’ On Collins and De’Juan Collins don’t work in the same office. And that isn’t something either of them is trying to change. Just like their wardrobe, the finance-focused brothers say working for firms that have longstanding relationships allows them to double up on resources. “We end up in conversations in rooms that we aren’t even in,” De’Juan says. The duo also has had the opportunity to work with each other on a handful of deals—and fondly recall their first one. “Because our companies have such a longstanding relationship, it was just kind of business as usual, but for us, it was monumental,” De’ On says. “I remember we went out and had a closing celebration with just the two of us.” And although they know the commercial real estate industry can be cutthroat, the two say they bring their a harmonious approach to the table—a lesson their mother long ago instilled in them. “Our goal was to make sure that whatever we did, we were always synergistic and not competing,” De’Juan says. “Where’s the fun in competing for a deal, a project, a piece of business when you’re the winner, but your brother’s the loser?”

Susan Gruppi and Jessica Miller don’t subscribe to the concept of twintuition. But the Fort Worth sisters known for their ability to breathe new life into old buildings agree that they’ve spent the past three decades finishing each other’s sentences and use body language as a form of communicating. “It’s not really a superpower; maybe it’s more like an old couple type of thing,” Susan says with a laugh. But that old married partnership idiom has been a forward force in their careers. Well, that and an abiding work ethic instilled in them by their entrepreneurial parents. “I know that seems kind of cliche, but I never realized working your ass off was a skillset until I got into the working world and realized some people are resilient and born to work their butt off and others aren’t,” Susan says. Working with a twin also can bring with it high highs and low lows, Jessica says. “Our successes are bigger because we get to share them, and our failures are worse because we get to share them.”

Growing up on a ranch in Celina, Dean Collins, and his twin brother Mark learned early on that your reputation is your business. That philosophy and a strong work ethic has played a big role in the Collins’ success in commercial real estate. Their identical faces make them marketable. “Twins are more memorable, right?” Dean says. He joined Cushman & Wakefield in 2006. Two years later, Mark followed. They didn’t work together at first, but became partners in 2012. “It has been a great move,” Mark says. Why does it work? That’s simple, they say; they stay in their own lanes. Dean and Mark both specialize in corporate advisory services, with Mark taking the lead on industrial clients and Dean targeting office users and tech companies. The brothers say they tend to be the yin to each other’s yang. “Some days when I might be hot over one particular topic, he’s cooler and calmer,” Mark says. “And then it will be vice versa the next time something comes up.” 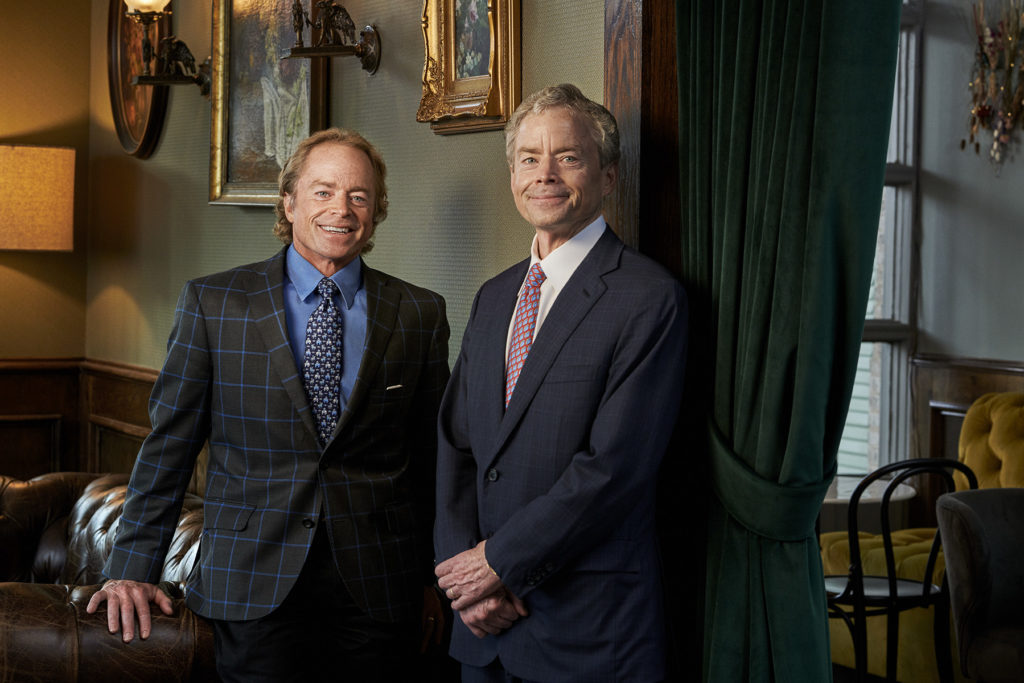 Twins Phillip and Don Huffines have a hard-and-fast rule when it comes to running a business together: Don’t talk about personal life on the job. “It creates more trust because sometimes those questions can lead to judgment,” says Phillip, the elder brother by three minutes. Trust, the brothers say, is the foundation of why their business relationship works and why their company has left a successful imprint on multifamily and master-planned communities across Dallas-Fort Worth. After all, who are you going to trust more than your twin? “You have that unconditional trust of your business partner, and that’s very, very rare in the business world,” Don says. The brothers, who have worked to solidify their separate personalities since having the collective name “twin” as youths, also focus on their individual strengths in business. Don focuses on acquisitions and underwriting and Phillip on the implementation and execution of those acquisitions. As a bonus, the brothers say they don’t have to sugarcoat anything when working together.