The real estate firm has thrived by diversifying, staying nimble, and giving brokers a stake in the business they're helping to build.
By Bianca R. Montes | January 15, 2020|10:07 am

These days in commercial real estate, you have the global giants (like CBRE, JLL, and Cushman & Wakefield), the small boutiques, and a handful of regional firms. In the middle of it all is Stream Realty Partners. Co-founders Lee Belland and Mike McVean have steadfastly held on to the maverick philosophies they launched their firm with 24 years ago, growing it into a force that does about $2.9 billion in annual transactions. Stream is diverse in both product type and geographies. It leases and manages more than 200 million square feet of space and has developed or acquired more than 27 million square feet.

Belland and McVean have watched many of their peers get gobbled up by public companies in M&A deals, but they have turned away the suitors hoping to acquire Stream. “It would end everything that we’ve talked about so far,” McVean says, after a long conversation about his firm’s culture. “Everything would come to an end. We sold these 900 people within our company a bill of goods—and we ain’t changing it.”

To the contrary. The co-founders are digging in, expanding beyond their leasing and management roots to build formidable investment and data center operations and an ever-growing development arm. Just last month, Stream launched an industrial development group to focus on new opportunities in both North Texas and the Los Angeles area, led by Cannon Green. And it’s going truly full service by starting a new office tenant rep division in Dallas. The firm tapped former Cushman & Wakefield standout Dan Harris to run it.

“It’s something that we’ve spent probably the last four years on, meeting with various people and trying to recruit the right person who would be that culture fit,” says Chris Jackson, Stream’s president. “Until we found the right person, we didn’t want to do it.”

McVean and Belland didn’t have big expectations back in 1996, when the then 30-somethings left comfortable posts at Trammell Crow Co. to venture out on their own. “We just got up and went to work every day and kept trying,” McVean says. “We were married with little kids. We worked our tails off, but we didn’t miss any practices, and we changed diapers.” Then, more people came, witnessed the family-friendly culture that was evolving, and added to its fabric.

If you dig a little deeper into the why behind their story, you’ll find two guys who were at a place in their careers where the prolonged recessions in the 1980s and ’90s left them pigeonholed as strictly leasing agents. They wanted the freedom to climb out and invest in real estate–a position they see a lot of up-and-comers in their industry aspiring to today. “The national firms, right now, are very focused on silos, and they want to reduce the number of things that you’re working on and make sure that you stay in your lane,” Belland says. “We’re the opposite.”

Stream gives people within the organization the authority and autonomy to make decisions that are best for themselves, their teams, and their clients. And there are no limitations on opportunities. It gives everyone a chance to learn, says Jackson, a 16-year company veteran who joined the firm to start its industrial business and now leads operations nationally. “When you have too many constraints for talented people, you’re limiting what they’re capable of,” he says. “I think of it in terms of common-sense leadership. We have a team that is empowered to make decisions; if there’s a problem, people know they can fix it.”

The meritocracratic approach at the firm rewards the greatest contributors. In addition to a 5 percent profit-sharing ration, Stream gives employees a chance to earn ownership stakes in various real estate investments, “so the person who’s actually creating the value has skin in the game,” Belland says.

Over the past 24 years, McVean and Belland have grown from a two-man shop in borrowed space to more than 850 employees across 12 regional offices, from Los Angeles to Washington, D.C. Its North Texas portfolio includes signature properties like Chase Tower, Pinnacle Tower, and the recently renovated Trammell Crow Center in downtown Dallas.

As for what’s new, Jackson says it’s really just more of the same. “We’re beneficiaries of one of the best real estate cycles this market or any has ever seen,” he says. “We’re focused on being successful in the businesses that we’ve already got, getting better where we are, and then growing into other areas.” Although there’s no timetable, expansion targets include Nashville, Phoenix, San Francisco, Portland, and Seattle, and the East Coast up to New York and Boston.

No matter where or when, growth will continue to be driven by appealing to professionals who are looking for a different kind of model, McVean says. “I think about someone who starts as a tenant representative or leasing agent at a company, and they do it for 30 years,” he says. “Their job description on their last day is the same as it was on their first. That’s not a lot of career growth. That’s not a lot of professional development. … We’re here to take people on a journey.” 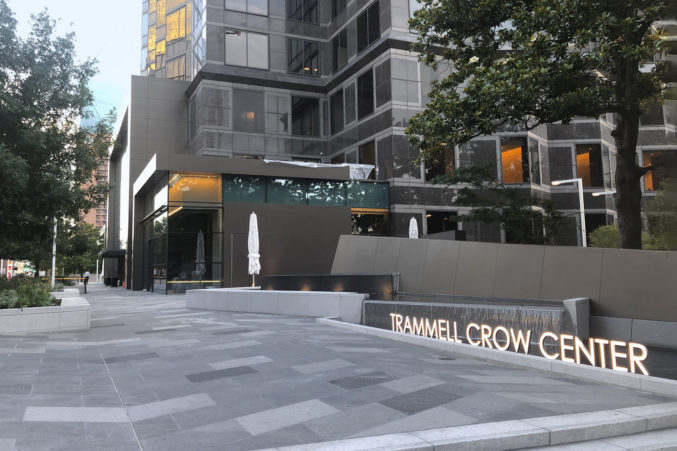 One of Stream’s signature projects has been the redevelopment of Trammell Crow Center, a 1.2 million-square-foot tower in the Dallas Arts District. The firm worked with owner JPMorgan Asset Management and architect HOK on the $140 million building makeover, which revamped the first two levels of the 50-story tower and its exterior plaza. Dark wood and stone were replaced with bright finishes on the ground floor, which consists of a tenant lounge on Harwood Street that has outside seating and dining areas, an outdoor patio on the Flora Street side of the building, as well as the addition of Royal Blue Grocery and Sloane’s Corner restaurant. On the second floor, the athletic center was revamped and expanded. A new tenant conference center with meeting rooms and boardroom space connects to the ground floor with a grand staircase.

Let's see what ya got.
By Tim Rogers
D Magazine Directories