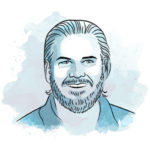 For an ex-accountant who runs a company that moves freight, I didn’t expect Dan Curtis to be so focused on corporate culture. But the president of BNSF Logistics is passionate about creating a nurturing work environment. “I’m not a big command-and-control guy,” he says, between bites of trumpeter tacos at Montlake Cut, which he deems the best fish restaurant in Dallas. “I’m an empowerment person.”

The company he leads was formed in 2002 by former BNSF Railway CEO Matt Rose, who wanted a non-asset-based group to help diversify operations. It has evolved from a small, traditional 3PL (third-party logistics) firm into a multimodal operation that moves things by rail, truck, ocean, or air. What once had three employees and generated less than $10 million in annual revenue now has 865 workers and 200 agents and rakes in more than $1 billion.

BNSF Logistics will transport pretty much anything, but it is known for handling large and complex jobs—like extremely rare vehicles, enormous wind turbines, or power-generation equipment that can weigh as much as 400 metric tons. Supply-chain and mechanical engineers help figure out ways to get things from Point A to Point B. “We’ve had to build roads that weren’t there for certain moves or find ways around bridges that wouldn’t work,” Curtis says. “The size and scope of some of the moves we’ve had is impressive.”

“We’ve had to build roads that weren’t there for certain moves or find ways around bridges that wouldn’t work.”

He grew up in New Braunfels, majored in accounting at Baylor University, and joined EY, working on the audit side. An interest in private equity led him to Hicks Muse, where he did operational accounting and learned how deals were structured. After three years, he moved to a company called Transport Industries, which later became Greatwide Logistics. He joined BNSF Logistics as CFO eight years ago, and took the helm as president in early 2018. It has given him a chance to pursue “transformative ideation.”

That means doing things like making heavy investments in technology and using algorithms to match specific loads with certain carriers, assembling a more diverse leadership team and ramping up diversity and inclusion efforts, and streamlining volunteer initiatives to partner with the nonprofit Truckers Against Trafficking.

Perhaps the most visible change is the way information is shared. Curtis “scrapped all the PowerPoints and boring meetings” and had an app created that uses short videos to communicate everything from strategy to monthly state-of-the-business reports. He’s determined to meet people where they are. “It’s a lot to move a culture forward,” he says. “But we’re making great strides and just have to stay the course.”