Along the crystal Azure Banderas Bay coast, Puerto Vallarta is one of Mexico’s most treasured beach destinations. And rightfully so. Each year, millions of city dwellers from Mexico City—and worldwide—flock to the seaside oasis to relax on one of its many sandy beaches, shop in its boutique tiendas (shops), and wander along the picturesque El Malecón (boardwalk).

Jackson Walker real estate attorney Suzan Kedron looked at dozens of properties in Puerto Vallarta before purchasing her own condo five years ago. Affectionately called Casa Migueleño in honor of her late son, Michael, the condo is located in the Zona Romántica neighborhood, a short walk up the hill from buzzing Playa del Muerto beach. For a more quiet and restful beach hideaway, Kedron recommends hopping a 45-minute water taxi to Yelapa, one of the area’s more secluded and picturesque coves—and home to a quaint fishing village. Here, day-trippers bask in the morning and early afternoon sun, but by late afternoon its cove empties as boats depart before dark.

From the cobblestone city center to the love and appreciation for art, Puerto Vallarta makes it easy to get swept away in one of the many fanciful murals or sculptures that line its winding streets. There is no shortage of activities, such as boat trips, diving excursions, and sunset horseback rides—and you will immediately be told about each them by salespeople, upon leaving customs. There’s even a free sculpture walk along the beach promenade that begins every Tuesday at 9:30 a.m. during high season, December through mid-April.

But for Jackson Walker real estate attorney Suzan Kedron, Puerto Vallarta is a home away from home. Kedron says she travels there as often as her schedule allows—and she even took advantage of the moderate real estate prices to buy a condo five years ago, which is used either by herself, family, friends, or clients more than 100 nights a year.

“It’s funny: The first day you arrive, you sleep,” Kedron says. “That’s how it always is for me. I get there and say I am going to do all of these things. But then I end up sitting on my balcony overlooking the Zona Romántica and find that I can solve all of the world’s problems right there.” 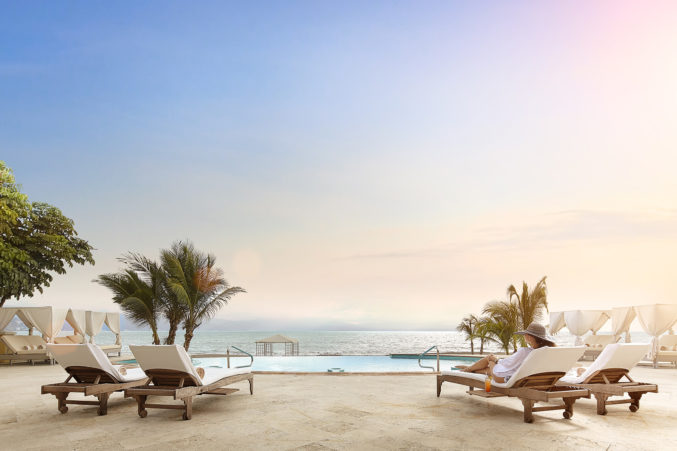 While Kedron says Poncho’s Tacos is the can’t-miss place to go for tacos in PV, more adventurous eaters shouldn’t miss taco stand El Chulo, where tongue and beef cheek tacos have earned a cultlike following among locals and tourists alike. Stop in for a nightcap at aptly named Daiquiri Dick’s beachfront bar, where margaritas are big—and strong.

No trip is complete without a visit to the northern Marina Vallarta area, which has seen a flurry of new developments in recent years. Kedron compares the area to South Florida, with a lot of upscale villas, golf courses, and luxury shopping.

It is here that the hidden gem of Puerto Vallarta exists: Casa Velas, part of the Velas Resorts collection. The AAA Four Diamond Award-winning resort prides itself on its signature attentive service. Each and every detail is about guest rest and relaxation—whether that be lounging poolside in a plush cabana, enjoying the Instagram-worthy ocean club, or finding time for a deep-tissue massage at the world-class spa.

Tranquility and wellness is the focus at Casa Velas’ botanical garden, where guided yoga and meditation classes are offered. Peacocks, frolicking around the grounds and greeting visitors, transport you to a mystical and Zen hideaway.

With just 80 suites, the all-inclusive, adults-only resort will feel like your very own private retreat. Casa Velas bills itself as “your secret oasis.” And it truly is.