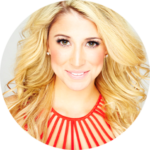 If you’re not ready to get back on a commercial flight but want to escape the city, Big Cedar Lodge near Branson, Missouri, fits the bill. About a six-hour drive from Dallas, the resort offers a recreational haven for families and a golf nirvana for those who like to hit the links. During a recent trip, I had the chance to play all five courses, including Payne’s Valley, the spectacular first public access course designed by Tiger Woods.

Golf and the Great Escape

TCU grad and former pro golfer Lauren Olaya leveraged her knowledge of the game and fashion sense to launch Olaya Sport from North Texas in 2018. She loves spending time at Big Cedar, she says, because the golf is the real deal. “At some other resorts, they expect to see some high handicap players, so some of the holes can be a little gimmicky.” She especially likes the par-3  Mountain Top course, designed by Gary Player. “It gives you a chance to test various aspects of your game, and the views are incredible,” Olaya says. “Big Cedar seems to be untouched by society. Especially with everything that’s going on now, it’s like an oasis.”

Along with rooms at three grand lodges, accommodation options include cottages, glamping—tents with hardwood floors, king beds, chandeliers, and private log cabins. The one I stayed in had a fireplace, jacuzzi, and plenty of taxidermies, in keeping with the wilderness setting.

More than a dozen restaurants ranging from the casual, such as Devil’s Pool and its southern homestyle fare, to the upscale Osage Restaurant, serve up regional cuisine and unbeatable views of Table Rock Lake. (I recommend the New York strip, the rack of lamb, or the house-made pasta with lobster and truffle crème.)

But it’s the golf that keeps the private planes flying in.

I played the 13 holes of Payne’s Valley that were finished in mid-July and viewed a 19th “bet-setting” hole, designed by Morris. The course’s near-perfect conditions and immaculate grooming reminded me of Augusta National. Hole No. 13 is a 653-yard, par 5; the amount of Zoysia used on that one hole is more than what is used on the entire Mountain Top course. Payne’s Valley will be fully open sometime this fall.

Mountain Top, designed by Gary Player, is a stunning, 13-hole, par-3 short course. The 84-year-old golfer and fitness guru made it cart-free—a move that also helped enhance the stunning views. It’s a great course for someone who doesn’t play a lot of golf or have a lot of time, as you can get through it fairly quickly. 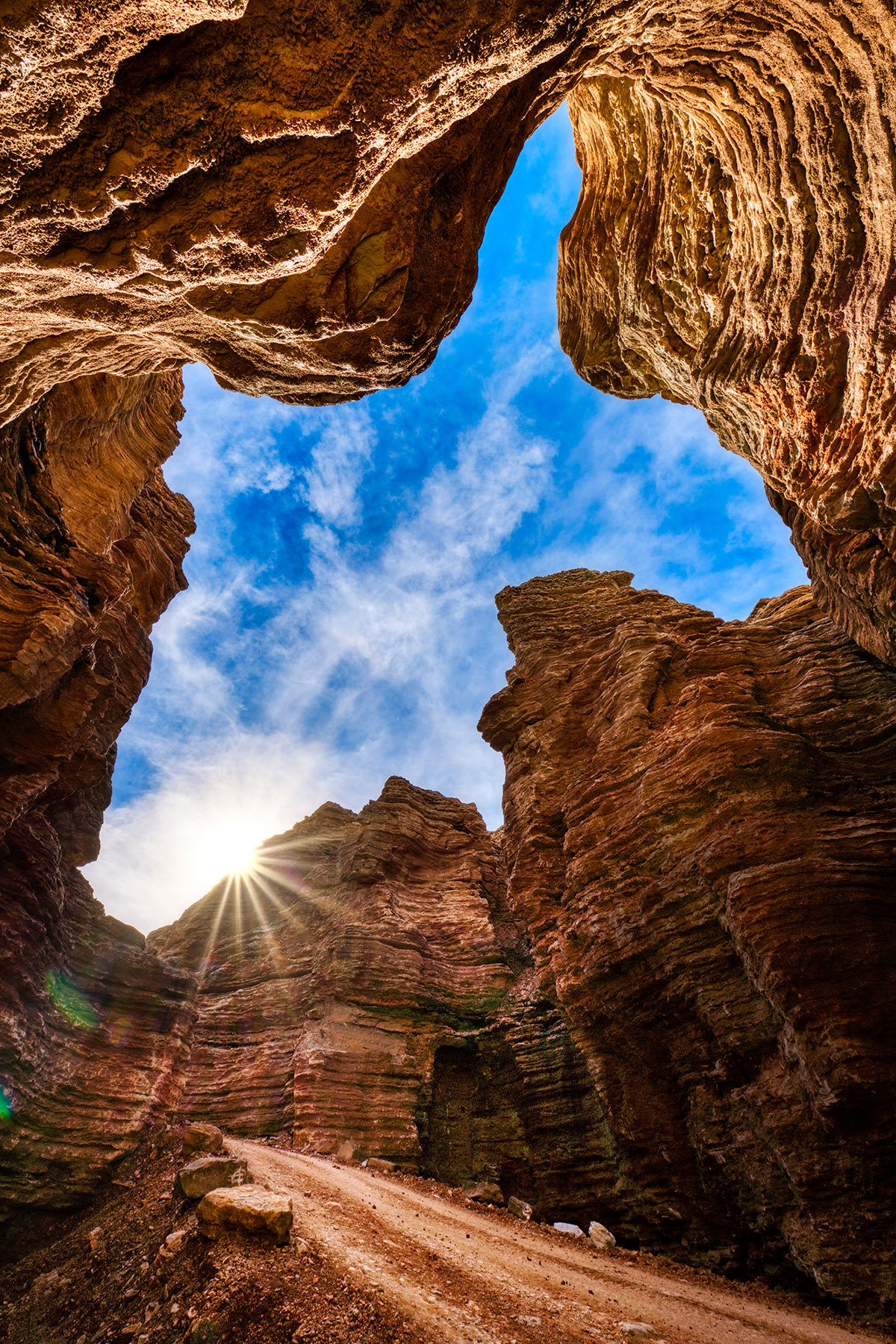 What Lies Beneath After a sinkhole opened at Big Cedar, excavation revealed the Cathedral of Nature.
Courtesy of Big Cedar Lodge

The nine-hole Top of the Rock course sits high above Table Rock Lake. Designed by Jack Nicklaus, it was the first par-3 course ever to host a PGA TOUR event and became well known for hosting the Legends of Golf tournament. It offers an unparalleled blend of nature and golf with waterfalls, creeks, ponds, and lakes.

Herds of bison roam alongside Buffalo Ridge, which was redesigned a few years back by Morris and Tom Fazio. It’s the best value at Big Cedar, considering the layout, the scenery, and the quality of play, which is PGA-caliber.

Ozarks National, the fifth course, is also PGA-worthy, so it’s no surprise that both it and Buffalo Ridge were selected to host Charles Schwab Series TOUR Champions events in August. The course was designed by Bill Coore and Ben Crenshaw—the same duo that designed Trinity Forest Golf Club. Be assured; the limited trees approach works much better in the Ozarks than in southern Dallas.

Although there is much to keep you on campus at Big Cedar, there’s also plenty of golf and many other fun activities about 10 miles away in Branson.

I played two courses; the first was Branson Hills Golf Club, one of the top-rated courses in the state. For the money, you can’t really beat it. The views are awesome and elevation changes make some of the tee shots extra fun. It’s not the easiest course and gives serious golfers a challenge that they don’t always find at some of the courses they play. I also golfed The Pointe, inside the gates at Pointe Royale Golf Village. It’s also a solid option and a good value. I was the first one out on an early-morning round and under a time crunch. I played all 18 holes in one hour and 27 minutes—a personal record. The course is pretty open and it’s short, even from the tips.

Accommodation options in Branson include the Hilton Promenade, tucked into Branson Landing, a downtown shopping district with plenty of restaurants, too. Don’t miss the national anthem fountain show that plays at 10 o’clock each night at Branson Landing. 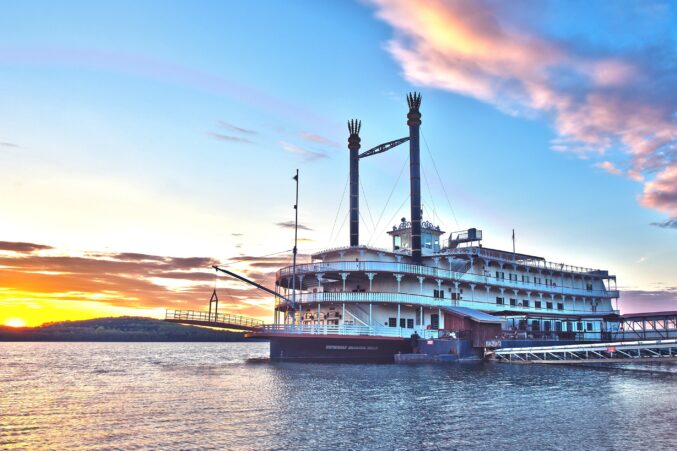 If you’re in the mood for Italian food, you can’t go wrong with a local favorite, Florentina’s Ristorante Italiano. I’m still thinking about the restaurant’s signature nachos, made with pasta chips and homemade alfredo sauce, grilled chicken, kalamata olives, other toppings, and drizzled with a balsamic reduction.

It seems like an odd place for it, but Branson is home to the world’s largest Titanic museum. “Passengers” experience what it was like to walk the hallways, parlors, cabins, and grand staircase of the iconic ship and see more than 400 artifacts, valued at more than $4.5 million. They can also try to stand on the sloping decks and reach their hands into 28-degree water. All visitors are given a ticket with the name of an actual Titanic passenger or crew member. I was millionaire John Jacob Astor; it was fun while it lasted.

Another entertaining experience for both couples and the whole family is a cruise on the Branson Belle. Along with dinner and a show, the paddleboat offers the chance to soak in the beauty of the Ozarks and sightseeing opportunities along Table Rock Lake.

Sometimes touristy things like this can be a little campy; that’s not the case with the Branson Belle. The quality of the food and the show both surprised and impressed. There are a number of menu options; I went with the dry-aged signature Angus ribeye, and it was delicious. The performers were terrific, too, doing quick costume changes and performing popular songs from the 1960s through today.