The United States began this century bracing itself for a gloomy future of energy scarcity, high oil and natural gas prices, and greater dependency on foreign suppliers. The country ended the first two decades on the verge of energy self-sufficiency, with domestic production at record levels and prices heading downward.

Texas played a starring role in an energy transformation that got its start on the western fringes of the Dallas-Fort Worth area. George Mitchell, CEO of a Houston natural-gas company, had been experimenting with hydraulic fracturing, or fracking, to unleash gas trapped in shale formations. In the 1990s, Mitchell Energy hit on the right combination of water, sand, and chemicals to turn the moribund Barnett Shale formation into a drilling hot spot.

The new technology was a game-changer, as energy companies honed the process to make it more economically viable. Natural gas production soared to record heights. Drillers then adapted fracking to oil. Crude began to flow from fields once thought to be in inexorable decline. The oil and gas industry snapped out of its doldrums and entered a decade-long boom.

Narrowing cost gaps: a disruptive force in the energy industry.

The U.S. Energy Information Administration expects the megawatt cost of natural gas to fall by nearly 50 percent between 2016 and 2023. It also expects the cost of solar to drop 87 percent and onshore wind to fall 71 percent. Alternative fuels will become more competitive with natural gas, at $43 per megawatt for onshore wind and $49 for solar. The narrowing cost gaps will be a disruptive force for an industry already facing weak prices and public skepticism.

With Texas in the lead, the United States passed Russia in 2012 and Saudi Arabia in 2013 on its way to becoming the world’s No. 1 oil producer by a wide margin.

The oil and natural gas comeback unfolded as a quintessential capitalist success story, with visionaries taking risks with new technologies and disrupting the status quo, reaping fortunes while confounding the naysayers.

The next energy disruptions are more likely to arise from policy than from technology or markets. The energy industry can no longer count on being allowed to produce as much oil as market prices might justify.

Oil and natural gas have enriched Texas for a century. In recent years, the state’s economy has diversified and grown less dependent on energy, but it still does better when the energy industry is humming. A policy-led eclipse of fossil fuels will present a new kind of challenge for the Texas economy and its oil and gas industry.

Oil and natural gas still account for about 80 percent of U.S. energy consumption. Limitations on alternative energy have tempered schemes by policymakers for a transition to cleaner power. Safety perceptions bedevil nuclear power. Nowhere does the wind always blow, or the sun always shine, so reliability concerns hinder wind and solar. Biomass and other technologies are still iffy at a scale required to light up cities. But the biggest obstacle for alternative energy has always been cost. 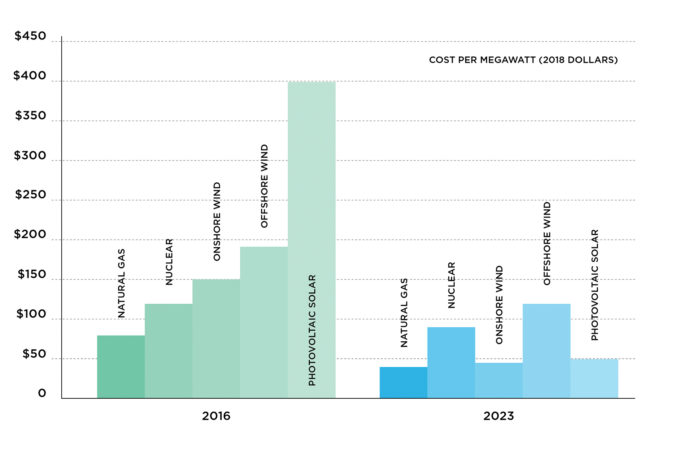 That, however, is changing. (See sidebar.)

Decisions on how to produce energy will be increasingly shaped by public policy rather than economics.

The oil and gas industry will use its riches and political clout to fend off government restrictions on fossil fuels.

The effort may pay off here and there. Still, the building consensus on climate change will be hard to overcome in a world where oil companies are portrayed as evil, alternative fuels are becoming more affordable, and capitalism itself is viewed with suspicion.

So what’s Texas to do as the world turns against oil and gas?

The best option will be to stay the course and trust the state’s economic model of low taxes and smaller government.

The sweeping diversification after the oil bust of the 1980s came about because the private sector had the freedom to deploy its business sense and capital to find new opportunities. Some of them have been in alternative energy.

In recent decades, Texas has emerged as a leader among states in producing solar and wind energy.

The fossil-fuel industry won’t disappear from the Texas landscape, but it will shrink. The future lies in an evermore diverse Texas economy, open to newcomers and new ideas—but that has been the state’s path to prosperity for decades.