Elaine Agather has spent many January and February evenings perched atop a horse in Fort Worth as she rides into a crowded arena for the Grand Entry of the famous Fort Worth Stock Show & Rodeo. This three-week-long Western extravaganza got its start in 1896.

The Dallas region chairman of JP Morgan Chase & Co. became involved with the event when she moved to Fort Worth in 1990.

“There were not that many women on the executive committee, and they said, ‘If you want to ride, you need to ride every single one of them.’” Agather committed, and each year her husband gifts her a custom cowgirl outfit to wear on the rodeo’s opening day. “I try not to repeat,” Agather says. “I wear a different outfit every grand entry.” 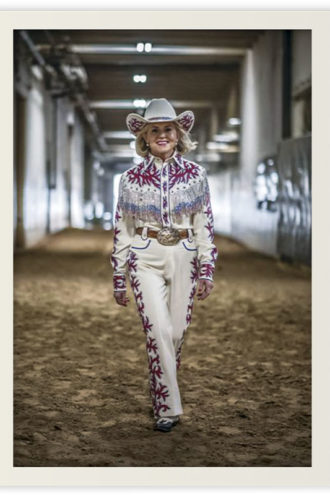 Proud Tradition Agather first got involved with the rodeo in 1990.
Courtesy of Elaine Agather via Fort Worth Magazine

This past season’s look was particularly significant in Agather’s eyes.

The gold lame outfit was decorated by a designer who once worked alongside noted 1930s tailor, Nudie Cohn.

“I love vintage, and it’s what the cowgirls used to wear,” Agather says. She tells of how elaborate Western outfits used to be by citing a Roy Rogers quote. The Western actor told Cohn, who was his costume designer, “I want you to put sequins all over my shirt because I want to make them happy all the way to the top of the arena.” Agather has the same hope for her own outfits. “I think [the glitz of my outfits] makes people happy,” she says.

The glitzy gold lame outfit also commemorates a historic shift in venue for the Fort Worth rodeo.

“The back is embroidered with ‘Dickies Arena,’ a nod to the just-opened venue. Dickies Arena, a $540 million project, will become the rodeo’s new home after nearly 84 years at the Will Rogers Memorial Center in East Fort Worth. The older venue will be refurbished. “It really marks a very special moment, “Agather says. “This arena is now built for all of the next generations.”

And it’s interacting with the next generations of rodeo enthusiasts, coupled with the tangible feeling of pride in our country that Agather loves most about her ride in each Grand Entry.

“It’s the passion that I have for the people, the community, the stock show, the kids in West Texas,” she says. “And that’s why [these outfits] are my favorite thing because it is something that I can pass on.”

Agather plans to one day donate many of her cowgirl outfits to the Cowgirl Museum and Hall of Fame for which she is a board member.