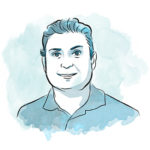 “I’m one of eight siblings. there were so many people in my home growing up, I was always looking for a way to stand out. For me, that was education. When I joined the university in Pakistan, I began to feel like there was more for me out there. I wanted more out of life. So, at the age of 21, I started applying to universities in the United States. In 1992, I left Pakistan for the first time. I had never been on an airplane. My friend, who had been accepted to a school in Fort Collins, Colorado, and I wore suits. Nobody told us that you probably shouldn’t wear a suit for a 30-hour flight. We landed in New York, and it was a complete culture shock. I spent the summer there with some friends, and it wasn’t the best part of the city. Here I was, missing family, thinking I’ve made this huge mistake coming to the United States. It was safer in my Third World country than it was, to a certain extent, in New York City. I came to Dallas during the telecom boom in 1999, after graduating from the University of Kansas with an engineering degree. I had gotten a job with Sprint out of school. But a Dallas company recruited me away, doubled my salary, and sent people to pack all of my things and move me here. Later, when that company neared bankruptcy, I was among the 15 or so people who remained out of 800 or so. That’s when I went to work for a startup here in Dallas that was doing Voice Over IP work. I formed my own company a few years later, realizing that if I wanted to grow VoIP technology, we needed to do more than wholesale. Being an entrepreneur and an immigrant has given me great insight. But my favorite thing is the community of like-minded individuals here. Every single person I talk to has had to overcome obstacles and struggles, just like I have. Regardless of background, our stories are very similar—and we’re all just a little bit crazy.”

Meet the Army Vets Making an Impact Through Tea