“I’ve learned that patience, persistence, and tenacity are more important than intelligence. Don’t get me wrong, it’s not good if you’re a moron, but being able to get back up after being repeatedly kicked in the head is more important than having a Mensa-level IQ. 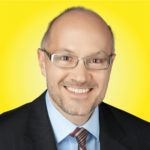 “We were told no by one major distributor twice a year for seven years before the company started buying our products. It’s now a major customer.

“Another example of being persistent but also creative, was when I was trying to convince my uncle to consider electric forklifts, versus the propane versions we used at the time. Every time I asked my uncle about it, he’d vigorously shake his head no. So I worked out a deal to try a free loaner.

“By the time my uncle arrived for work that day, my dad and several operators had driven the electric lift. They announced, ‘We’ll be switching to these now,’ and my work was done!”