Enjoy unlimited access to all of our incredible journalism, in print and digital.
Subscribe Now
Advertisement
Personalities

Robokind Founder Richard Margolin Is a Master of Origami

Richard Margolin’s office isn’t the tidiest. The floor is cluttered with boxes of products and prototypes of the educational robots his company, Robokind, produces. A bookshelf is crammed with texts on everything from psychology and neuroscience to the art of leatherworking. A life-size cutout of Margolin himself sits askew against the back wall. The windows feature a sweeping view of downtown Dallas that, from the 42nd floor of Energy Plaza, can make one feel above it all.

The view is spectacular, but it still fails to register as the most striking aspect of the space. That honor is reserved for a vase containing hundreds, if not thousands, of brightly colored and patterned paper stars that Margolin created. “The stars are almost like a nervous tick at this point,” he says. “Before I’m even aware that I’m doing it, I can pump out 50 to 100 of them.”

The founder and CTO of tech-driven learning company Robokind has been involved with exceptionally high-level projects over the years, from developing purification methods for carbon nanotubes to working in genetics on the Human Genome Project at UT Southwestern’s Bioinformatics Lab. His math orientation is balanced by a lifelong desire to create. As a child, this manifested itself in mastering the construction of card houses. From there, it progressed to making duct-tape wallets. Toward the end of his high school career, Margolin came across the art of origami. “I injured my arm wrestling, and I had trouble moving my hand, so it started out as a way of physical therapy,” he says.

He began with the paper stars, and has since made at least 100,000 of them. As his abilities grew, he moved on to paper cranes, and then on to larger, more complex folds. Margolin and his wife gave up an evergreen Christmas tree in favor of an origami one, accompanied by an array of intricate paper snowflakes, icicles, and miniature paper-craft houses. The final product makes Saks Fifth Avenue’s notorious holiday displays look like a small-town mall’s Santa’s Village. But that’s not what motivates him.

“For me, the payoff was never in what I was creating,” Margolin says. “It was in the act of building it, which is why I don’t collect the things that I make. I give them away—I throw them away. Once I’m done, I’m done with it. I’ve never treasured the end product of the things I make as a hobby, it’s the process, because that’s where I feel like I’m learning.”

With Robokind, Margolin leverages his robotics experience to create products that help children struggling with Autism Spectrum Disorder learn and develop social skills, and help introduce all students to the world of STEM.  In the same manner that Robokind’s robots transform the way children engage in the classroom, origami has changed the way Margolin interacts with the world around him.

“It’s a convergence of all the things that I really like,” he says. “You’re creating something that’s aesthetically pleasing, but there’s all this nerdy math behind it. You can study entire Ph.D dissertations on origami. There’s real-world practical applications within crazy engineering that goes beyond paper cranes.” 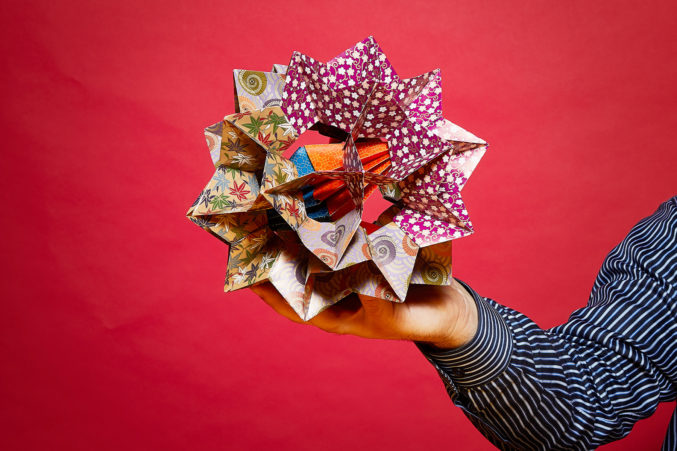 Take the hexaflexagon for example, one of Margolin’s favorite folds. It looks like a six-sided polygon split by six triangles that might contain a middle school love letter.  The hexaflexagon is a variation of a flexagon, discovered in 1939 by Princeton mathematics student Arthur Stone. Stone formed a group with other students to investigate the shape’s properties. One of its members, physicist Richard Feynman, went on to diagram a more complex version that consists of six sides, called a hexahexaflexagon. This figuration went on to inspire what’re known as the Feynman Diagrams, which is how scientists can best diagram nuclear and quantum physics.

Despite the hexaflexagon’s complex properties, Margolin says they are relatively easy to produce. To him, whether it be the paper stars or Stone’s three-sided polygon, it’s all just folding—and it’s the best way he knows to combat stress. “It’s an escape,” he says. “It’s really a meditation in the true sense. I can just do it. I don’t need music, I don’t need anything in the background, I can just be there focused on that one thing.”

For someone whose job requires the brain power of an engineer and the drive and business strategy of an entrepreneur, stress relief isn’t just a luxury—it’s a necessity. And origami helps provide it.  For other people, stress can be relieved through painting or fitness. But in the end, it’s all defined by one thing, Margolin says: “Happiness is just not being neurotically bothered by the things around you.”

A story worth your time. Read it.
By Tim Rogers
Entertaining

Holiday Gift Guide: Help Your Loved Ones Thank You

You deserve it.
By Jessica Otte
D Magazine Directories