It’s October. And the scent of Fletcher’s corny dogs and deep-fried goodness hangs heavy in the air at Fair Park in Dallas, where hordes of Texans have gathered to honor a Lone Star tradition.

They bustle and press through the Art Deco buildings to eat, drink, and be merry. For three weeks and some change, the park is abuzz with laughter, thrilled screams, and fun. But once the State Fair of Texas ends, the park returns to its resting state: sad, empty, and dangerous.

Fair Park is Dallas’ problem child. Although the Design District, West End, Deep Ellum, and other downtown neighborhoods are seeing significant renewal, Fair Park languishes in a sea of ugly parking lots, unused and neglected by its city.

The same is true of many urban and rural areas across the nation. Over time, poverty in these places becomes entrenched, and the people suffer. Vice and squalor spread like rot and drive away investors, making recovery for these areas ever more difficult. In these fat years of economic bliss, there is no shortage of capital waiting in the wings. But the decades-old war wounds of the Great Recession still ache, and developers remain wary of risk. Funds abound, but investors want little to do with impoverished areas.

These are the challenges that Opportunity Zones aim to fix. The brainchild of a Washington, D.C.-based think-tank called Economic Innovation Group, the incentives program found its way into the Tax Cuts and Jobs Act of 2017. The law gave governors a new tool to draw economic stimulus to depressed regions by allowing them to designate a certain percentage of low-income tracts in their states as areas where investors could place their capital gains, whether in businesses or real estate, and receive tax reductions on those gains.

Altogether, there are 8,700 Opportunity Zones in the United States. Dallas-Fort Worth is home to 52 of them, and 18 rest within Dallas city limits. Economic development officials and civic leaders are hoping the new tax breaks will spark development in struggling areas, especially South Dallas. Developers, investors, and other real estate players are eager to participate in the program, excited to nurture new markets and obtain the financial benefits.

So far, the nitty gritty implementation of the program at the local level is proving complex, and there is still a good deal of regulatory uncertainty surrounding the tax law’s finer points. In spite of this, investors are champing at the bit to begin taking advantage of the program, and Opportunity Funds–mandated coffers for capital gains seeking tax shelters–have been sponging large pools of money to deploy in the zones.

One study estimates that during the next few years, Opportunity Funds could raise $30 billion in capital. But because regulatory guidelines are still up in the air, this number might be a gross underestimate of the true pool. In any case, the sheer amount of buzz Opportunity Zones have generated makes them the most interesting development to have taken place in the investment community since Dodd-Frank, and an absolute must-know for those in the commercial real estate field. 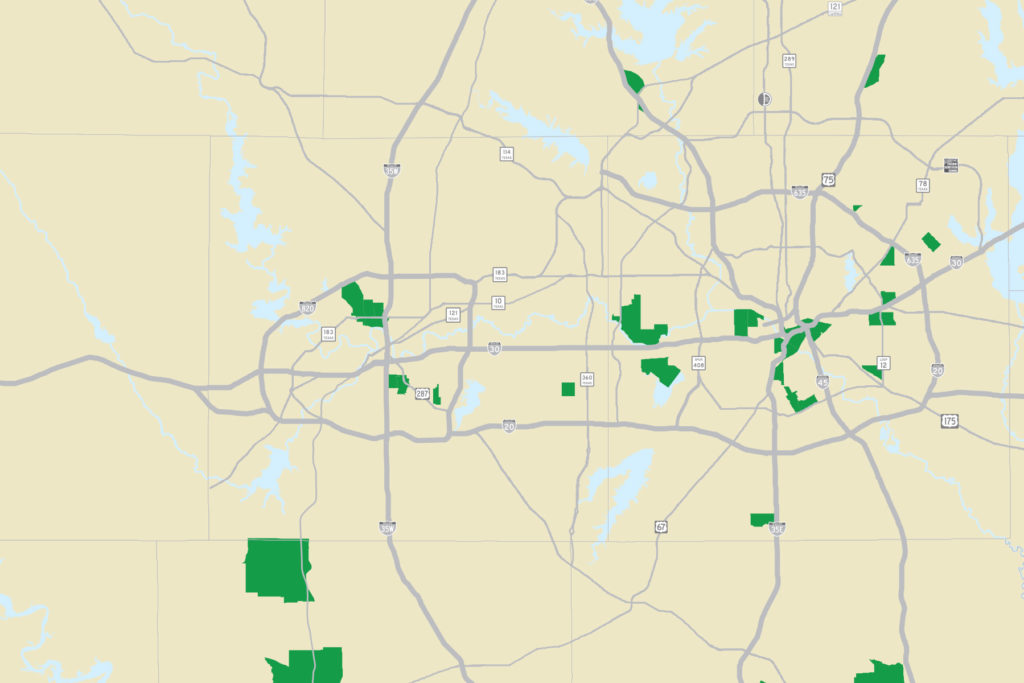 There are 8,700 opportunity zones nationally. Below are the 52 ares designated in North Texas.
courtesy of The Real Estate Council

The Program’s Nuts and Bolts

What is the criteria to become a qualified opportunity zone?

The maximum percentage of census tracts a state can designate as Opportunity Zones.

The poverty rate a census tract must have to qualify.

The percentage of median income that must not exceed metro or state averages.

In theory, Opportunity Zones are simple enough. But in reality, they are complicated beasts with unresolved details and regulatory soft spots. The first round of proposed regulations came out on Oct. 19, and were largely centered around real estate-specific issues. The second round of proposed regulations is out for comment at the moment, and Treasury Secretary Steve Mnuchin has indicated that he intends to release new guidelines by the end of the year.

But D.C.-based Opportunity Zone specialist Mary Burke Baker, government affairs counselor at K&L Gates, says Mnuchin’s staff is not so sure that will happen. More likely, she says, the new regulations will come out sometime in the first quarter of 2019 and are probably going to be focused on bringing more clarity to questions surrounding investment in businesses operating within the zones.

Opportunity Zones are defined as “low-income census tracts nominated by governors and certified by the U.S. Dept. of Treasury into which investors can now put capital to work financing new projects and enterprises, in exchange for certain federal capital gains tax advantages.” The Real Estate Council recently gathered a small group of Dallas-Fort Worth industry professionals and Opportunity Zone experts to discuss the topic. They provided insight on key points:

These are the basics. There are a slew of other regulations and unanswered questions covering timelines, the use of working capital for projects, and more.

What are the tax advantages of a qualified opportunity zone?

Investors can defer taxes on capital gains until 2026

Capital must be placed in an opportunity fund within 180 days

Though the tax breaks are tantalizing, there are significant risks to leaping before you look when it comes to Opportunity Zone investments. If a fund fails to uphold any of the regulations mentioned above, investors are at risk of losing their tax benefits and getting saddled with a portfolio of riskier than normal assets.

“This is not a do-it-yourself project,” Baker says. “The No. 1 thing I tell people is, ‘Don’t assume that if you think you understand the code and the regulations that you understand all the potential pitfalls that you could step into if you don’t proceed with good counsel.’”

Cushman & Wakefield Executive Managing Director Beth Lambert says it is absolutely necessary to remain disciplined when putting money into Opportunity Zone projects. “Investors are still going to have to look at the supply and demand factors in those areas because the real estate has to work,” she says. “All these tax benefits are great, but to make sure you’re putting legitimate, needs-based real estate, you’ve still got to underwrite to normal metrics.”

Lambert says she sees a concerning lack of thorough void analysis as funds rush to lay claim to their investments in the Opportunity Zones. “My fear is that there will be unsophisticated investors who like the big-picture strategy but don’t do enough of their due diligence,” she says. “It’s a little scary because there are groups that are embarking on this, and you’ve got to be a very savvy investor because you’ve got to make sure that your money is getting out and you’ve got the right people who are checking all the boxes. … If you don’t designate and handle this whole thing appropriately, the entire benefit of the program can go away very quickly.”

Another potential barrier to successful implementation may be the lack of a debt component. Lambert points out that though some lenders will, “do the right thing,” and help finance projects in Opportunity Zones, the majority will need an incentive to do so. She’d like to see a complementary debt incentive put into effect to help Opportunity Zone projects get the funding they need to kickstart ailing local economies. But with as many outstanding regulatory questions as there are, it’s unlikely we’ll see such a component anytime soon.

“Until you put these programs in play, you don’t really understand where your holes are,” Lambert says. “Typically, these kind of high-risk, ground-up projects, or significant rehab projects, don’t get done without debt. So, how do we bring the debt to the table? That’s a void that needs to be figured out.”

Whether or not Opportunity Zones investments succeed or fail will all come down to the quality of implementation, says Robert Kramp, director of research for CBRE. “Any economic development tool is only going to be as good as it is implemented on the local level,” he says. “We’ll see outcomes that vary all over the board. There will be huge success and some that may not be.

“Investors are still going to have to look at the supply and demand factors in those areas, because the real estate has to work.”

Dallas’ Opportunity Zones are mostly concentrated in its southern and eastern sectors. A handful are in more urban areas like Fair Park. Lambert says Dallas’ Opportunity Zones are likely to see a heavy focus on new retail projects, as recent increases in housing in many areas have created underserved retail markets. Kramp sees a different future in the crystal ball and anticipates a move toward industrial projects, South Dallas’ current bread-and-butter asset class, as well as ongoing additions to its housing inventory to support the region’s rapid job growth.

Despite the unknowns, Opportunity Zones are a step in the right direction toward helping low-income communities build prosperity. Public-private partnerships are responsible for many of Dallas’ best spaces, and proponents say they are the way forward when it comes to beating back poverty. Long before Opportunity Zones came on the scene, Dallas was making strides in downtown rehabilitating historical buildings and putting green space over a freeway to create a vibrancy that did not exist just 10 years ago.

Like Kramp says, Opportunity Zones are just a tool. But in the hands of DFW’s seasoned real estate community, they could play a big part in the region’s ongoing growth.