Nobody bats an eye when someone arrives in the Dallas-Fort Worth area from Oklahoma, Ohio, Oregon, and most other parts of the country. The rush of refugees from California’s high taxes and living costs often occasions a smug satisfaction—but North Texans welcome them, too.

It’s not much different for immigrant newcomers. A loud few may hold hard-line anti-immigrant views, but fast-growing DFW needs more workers, and foreign-born employees help combat labor shortages. Decade by decade, our economy has come to increasingly rely on foreign-born workers to fill local construction, food-service, housecleaning, childcare, and landscaping jobs. However, a willingness to take on low-wage jobs that few Americans want isn’t the end of the immigration story.

In the past decade or so, the DFW foreign-born community has become better educated—a plus for a local economy that’s increasingly technology-driven. According to Census Bureau data, the foreign-born made up nearly 21 percent of DFW residents aged 25 and over with bachelor’s, master’s, doctoral, or professional degrees in 2017, up from about 16 percent in 2005. The corresponding gain for the nation as a whole was smaller—from 15 percent to 17 percent.

DFW isn’t alone in running ahead of the nation in attracting foreign-born citizens with college degrees. The same holds in many of the country’s largest metropolitan areas for obvious reasons: Big cities are where many college-educated workers want to live and where the companies that hire educated workers choose to do business.

White-collar opportunities abound in our local economy, with its booming tech sector and rapidly expanding professional ranks. In a previous column, we looked at the overall market for college graduates. Now, we narrow our focus to college-educated immigrants. They come from just about all parts of the world, but countries across the Pacific Ocean dominate. 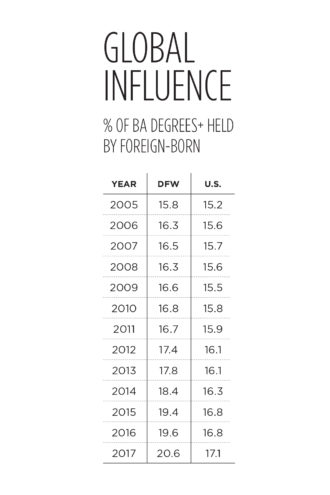 The college-educated make up more than half of the DFW immigrant populations from Eastern Europe, the Middle East and Western Europe. Southeast Asia and the Caribbean countries are just above a third with degrees. How do the native-born compare? The data show about 37 percent are college educated—bachelor’s at nearly 25 percent and advanced and professional at 12 percent.

Education pays off just about everywhere, suggesting DFW’s college-educated immigrants would be at the top of the income distribution even if they’d stayed in the places they left behind. Yet they’ve chosen to come here—to one of Americas’ most ardently capitalist places.

Research we did for the Federal Reserve Bank of Dallas tells why: At any given number of years of education, we found, economies with greater economic freedom deliver higher incomes than those that are less free. Put more simply, many immigrants will find their higher educations are worth far more here than in the old country.

What do DFW’s college-educated immigrants do? A wide range of things. They’re engineers and scientists who help the economy grow, particularly in tech industries. They’re entrepreneurs who start companies and create jobs. They’re doctors who treat our illnesses and researchers who add to our knowledge. They’re teachers and professors who educate the next generation. Just by being here, they’re enriching North Texas’ culture.

The Census Bureau data give some idea of the industries that employ DFW’s college-educated immigrants. Region of origin suggests they’re most heavily represented in the information sector, where 71 percent of the foreign-born workers come from Central Asia, Eastern Asia, and Europe. Large shares of these education-centric regions are also found in finance and professional and business services.

Despite the anecdotes of Ph.D. cooks and cab drivers, the data suggest few college-educated immigrants are settling for less-skilled jobs with lower pay. In construction, for example, more than 95 percent of DFW immigrant workers come from Mexico and Latin America, the two regions with the smallest shares of college-educated workers. 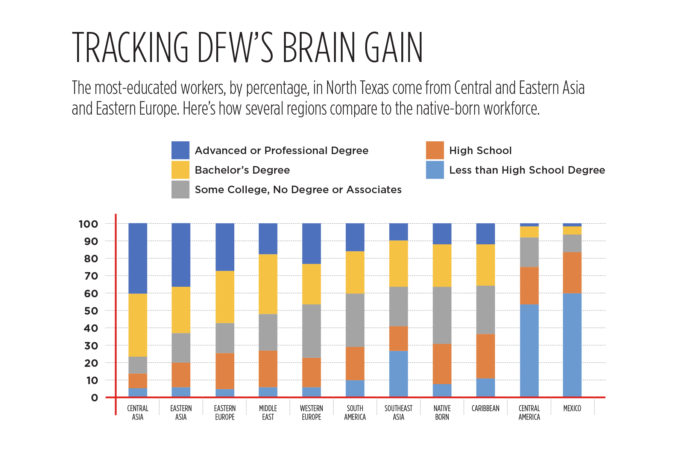 Broadly speaking, DFW’s 341,081 college-educated immigrants hold the same kinds of jobs as the region’s 1,315,863 native-born college graduates. The two groups work side-by-side in big and small companies as well as medical facilities and universities. More important, the college-educated immigrants broaden North Texas’ talent pool and, in many cases, make up for bottlenecks in the pipeline for domestic graduates with advanced degrees in science, technology, engineering, and math.

Do the educated foreigners displace American graduates? Only rarely. To keep growing and attracting new companies, the bustling local economy creates a continual demand for college-educated labor. Employers are hiring more Americans as well as more foreign-born, suggesting new jobs have been running ahead of in-migration for college-educated workers.

Does the arrival of educated immigrants depress pay for native college graduates? Probably not. The expansion of DFW’s foreign-born educated workforce has largely been driven by demand rather than supply, so newcomers don’t put downward pressure on pay. What’s more, educated workers are mobile, and North Texas  employers won’t attract the workers they need unless they’re willing to pay the going national wages, adjusted for the region’s lower cost of living.

In DFW, Texas, and the rest of America, immigration generates discord. Too often, focus turns to what the newcomers from abroad might “take away.” In the DFW area, where potential labor shortages may be the biggest constraint on growth, it becomes more important to highlight what foreign-born add to our economy and community—the college-educated in particular.