In June, the city of Richardson joined the Better Block Foundation to throw a party in a burgeoning neighborhood. Inside what’s for now being called the Collins/Arapaho Transit-Oriented Development and Innovation District—a place filled with generally uninviting, aging, one-story manufacturing buildings—workers trotted out food trucks, brought in live music, and invited anyone who works in, lives in, or visits the area.

More than anything, the block party served as a preview of what the city wants this pocket to become. It was held behind the buildings on grass, where a couple of temporary bridges brought together both sides of a stream that has long split the development with the other. Employees have been known to walk around the area’s many parking lots after lunch for exercise, but here, they were made privy to a new trail the city plans to install, weaving back and forth across the stream. Chairs and picnic tables added some needed life to the green space. “I was incredibly impressed with the turnout,” says Krista Nightengale, managing director at the Better Block.

“What we’re all trying to do is just create spaces where people can come together and can soften to one another,” she says.

A couple of decades removed from the ultra-prosperous days that gave Richardson’s Telecom Corridor its name, the giant office buildings vacated by telecom’s decline have been snapped up by Dallas-Fort Worth’s larger corporate growth.  (State Farm, Blue Cross and Blue Shield of Texas, and RealPage call Richardson home.) But six years ago, the city put its finger on a problem within this major submarket of the Corridor, encompassing 20 percent of the city’s jobs.

The older inventory, with ceilings a little lower than modern industrial uses prefer, had higher vacancy rates than the rest. A 2013 market value analysis put the rate at 21 percent. Part of that might have been attributed to an over-reliance on industrial zoning—encompassing 92 percent of the area—which dates back to the district’s purpose as a supply chain to the bigger telecoms.

The Richardson chamber studied reinvestment strategies—including the possibility of rebranding as an innovation district. Along the way, the region continued to grow, and vacancy sunk to 7.5 percent. Leadership now thinks of the challenge as one of perception and aesthetics. Things like overbuilt parking lots, a lack of walkability, and, yes, restrictive and outdated zoning continue to hold back development.

But stakeholders have also started to see opportunity in this “flex space.” The city wants to cater to start-up and scale-up businesses, bridging a gap between the incubation happening at UT-Dallas and the more mature companies that occupy the area’s towering office buildings.

The vision crystallized. Among the efforts, the city is pushing to redevelop massive parking lots that sit adjacent to the Arapaho Center DART Station, rethinking that station as a multi-use entry point to the district. 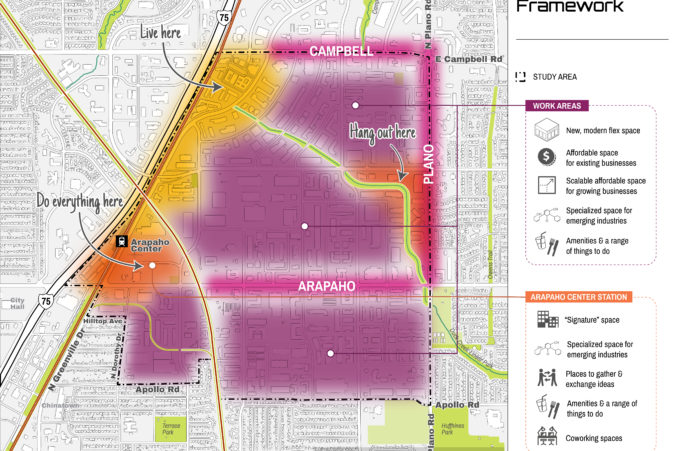 An overview of the city’s approach to the district.

Greenville Avenue, which runs by the station, will have lanes taken out, pedestrian touches put in, and a nice, wide bike lane added, likely to be set off from the street with a median. Doug McDonald, planning projects manager at the city, says he’s already getting calls from developers. For good reason—studies show these walkable spaces provide more bang per developer buck.

A final name for the district is forthcoming. McDonald envisions that it will incorporate the words “Telecom Corridor,” a registered trademark. As in: “The Something Something Innovation District within the Telecom Corridor.” That seems to be the happy medium between folks pushing for the city to brand toward younger entrepreneurs and those sensitive to ditching its Texas Instruments, Collins Radio, UT-Dallas roots.

Compromise is good. So is updating our cities to better appeal to the modern worker.

McDonald says Richardson mayor Paul Voelker has been talking about the district as a response to the Amazon craze—investing in 1,000 small companies in hopes that one becomes the next giant. “That’s what he sees this area as being,” he says. “A place where we can really start growing small businesses to stake their ground here in Richardson.”