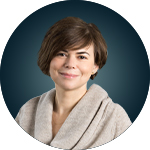 “I grew up in Moscow, Russia, which was the Soviet Union at the time. People in my family were engineers, but it was clear from an early age that I didn’t have an engineering bone in my body. Growing up, we traveled and had a lot of conversations; we discussed everything from daily issues to big-world topics. Today, my husband and I continue this tradition with our children.

“I tried a lot of different things in my childhood; initially, I thought I might be a scientist, then a writer, then a teacher. I graduated with a degree in psychology from the University of Moscow. In 1992, I came to the United States and realized that I could be all of my childhood interests by becoming a lawyer. I went to law school knowing I wanted to work in immigration. I had one credential to show people: myself. When people said, ‘You don’t know how it feels to be an immigrant,’ I could say, ‘Actually, I do.’

“I’ve been doing immigration law since 1997. Before coming to Munsch Hardt Kopf & Harr in 2011, I worked at Gardere Wynne Sewell and, before that, Baker McKenzie. Immigration law is one of the more individual-oriented areas of law, and you see the results of your work quickly.

“Today, my parents live next door to me. My family is a huge part of any career success I’ve had. I love that I can be some incarnation of all the things I wanted to be in my youth: I’ve learned about various branches of science, and writing goes hand-in-hand with law. Teaching and counseling remain my favorite aspects, but the teaching goes in both directions—I’ve learned so much from my clients throughout the years.”