Why you need to know him: Because Steven Duong is quietly pushing Dallas to become a model for the future of cities around the world. He heads up the design, planning, and economics group at AECOM and is one of the driving forces behind the Resilient Dallas plan, part of a 100 Resilient Cities program pioneered by The Rockefeller Foundation. The initiative aims to help Dallas shore up its defenses against physical, social, and economic challenges that lie ahead.

An avid traveler, Duong has journeyed around the world studying the fabric of urban life. But there’s no place he’d rather be practicing his craft than Dallas. “In a lot of ways, the Texas and Southwest cities are the future of America,” he says. “What we do here and how we figure it out is more translatable to your Nashvilles and your Charlottes and your Denvers, because those cities aren’t going to grow up into New Yorks. They’re going to grow up into Dallases.”

The plan to shape a thriving, equitable city has seven goals:

One
Advance equity in city government

Two
Be a welcoming city to immigrants and all residents

Three
Increase economic mobility for the vulnerable and marginalized

Duong is also well known for his efforts on the Dallas Hyperloop, a technological wonder capable of catapulting travelers to and from other major Texas cities at speeds of more than 600 miles per hour. He has a soft spot for technology, which gives his work particular relevance in the burgeoning age of smart cities. He traces it all back to his childhood in Tennessee.

The son of immigrants who fled the Vietnam War, Duong’s early years were spent in a stereotypical, idyllic Knoxville cul-de-sac, where he’d build computers from scratch. He went on to pursue a degree in computer science at Virginia Tech. But something was missing; he wanted to have more impact on the world around him. Duong switched his focus to architecture, but that, too, failed to satisfy his desire to shape the built environment. In the end, he graduated with a double major in landscape architecture and urban planning.

“I realized that the scale of architecture was too small for me,” he says. “I really liked doing larger-scale projects … I think the work I’m doing now is pretty ideal to how I would have drawn it up years ago.” 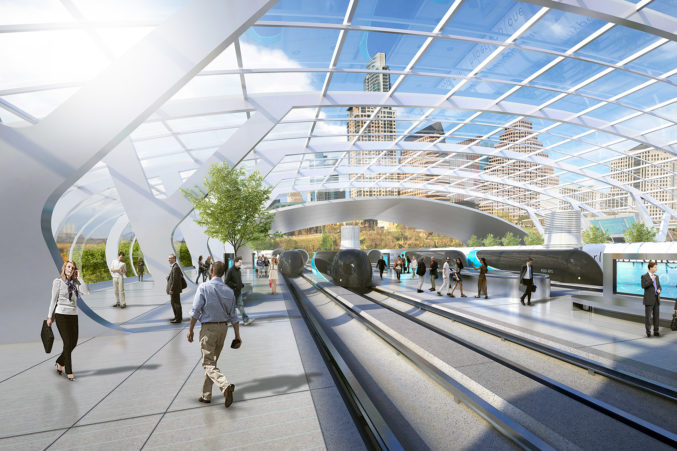 Getting from Dallas to Austin in 19 minutes may become a reality with the Hyperloop.
Courtesy of AECOM

Duong found his way to North Texas in the summer of 2011. While earning a master’s degree in city and regional planning at the University of Texas at Arlington, he secured an internship in sustainable development at the North Central Texas Council of Governments. He worked as a planner for the cities of McKinney and Arlington before joining AECOM in 2015. There, he focuses on projects at the intersection of major civic issues, design, innovation, and sustainability. In this role, he became project manager for the Resilient Dallas project, working in tandem with the city’s Chief Resilience Officer Theresa O’Donnell.

“Dallas is becoming a lot better at talking about urban issues than it used to be.”

When he is not at work, Duong can be found cycling around White Rock Lake or on the Katy Trail, camping in a national park, traveling to far-away destinations, or cooking up his “extremely good amateur” cuisine. But, he says, wherever he goes and whatever he is doing, he is dreaming up better cities.

He admits it can be tough to walk the line between theory and reality, and to effectively communicate the benefits of thought in urban planning to residents, especially when there are rarely physical things he can point to and say, “This is a direct result of my work.” It’s all about planting seeds, he says, and guiding stakeholders and citizens to make choices that lead to flourishing urban environments.

“That’s when the actual progress gets made,” Duong says. “There’s a natural tension between public interests and private interests oftentimes, but you need both parties to work together to enact dramatic change in cities. When you’re able to combine those two together and create something that’s exemplary and get all parties involved, that’s pretty satisfying.”

Look: Bicycles Take Over Dallas Roads For a Weekend