Hugh Boyle grew up in a blue-collar family and a house full of instruments, but says he never felt the pressure to take a lesson. “I picked something up when I was 7 or 8 and said, ‘Dad, how do you do this?’” he says. That inquisitive spirit has stayed with him and now, some 40-odd years later, has the TracyLocke CEO walking down memory lane.

Boyle, who came to Dallas by way of the United Kingdom, has the look of a musician, with his spiked hair, peppered goatee, and loud, patterned shirts he pulls off with ease. What isn’t as easy to imagine is the genre he favors. It is much easier to imagine Boyle behind the microphone of a 1980s punk rock band than a richly toned parlor-sized guitar that oozes country blues. Boyle did, in fact, get his start playing in an 80s punk band before pressure from his parents sent him off to college. He decided to give up music for a career in advertising. “I didn’t want to be that 50-year-old guy playing Journey songs on an electric guitar on the weekends in my Chinos,” he says.

Although his passion for music still brewed—he played with a band for several years in London—it was a holiday gift this past year that has Boyle returning to the studio. For more than a decade, an old iPod he owned sat collecting dust in a drawer. Boyle mentioned to his wife that he thought the iPod contained songs he wrote at a different time in his life. This past Christmas, his wife gifted him with the contents of the iPod on a flash drive. On it were a dozen songs he wrote while going through a previous divorce.

“I was really emotional listening to those songs, because I was listening to myself 10 years ago,” Boyle says.

“We have a company of 600 people at TracyLocke, and there is a lot of pressure that goes along with that,” Boyle says. “Some people go home and chop vegetables.”

One song in particular stood out. On his first Valentine’s Day post-divorce, Boyle was walking through an underground Subway station in London and came upon a man belting out the most beautiful heartfelt songs. “I stopped to listen to him and gave him 10 pounds and told him, “I just had the most miserable Valentine’s Day, mate, but that’s just really cheered me up. It’s beautiful.’ I actually ran home and wrote a song about it.”

That song and the others from the old iPod have inspired Boyle to return to the studio to re-record the music. The words, he says, will stay the same, but the musical arrangements will change, because he understands it better 12 years later.

Boyle isn’t sure yet what he’ll ultimately do with the recordings. “I just really want them for my kids,” he says. “When you listen to someone’s own song, you’re basically saying, open this door and look at how I feel.”

Like his Irish father, Boyle raised his children in a home filled with musical instruments. His two older children are passionate about music and continue to inspire their father to incorporate it into all aspects of his life. 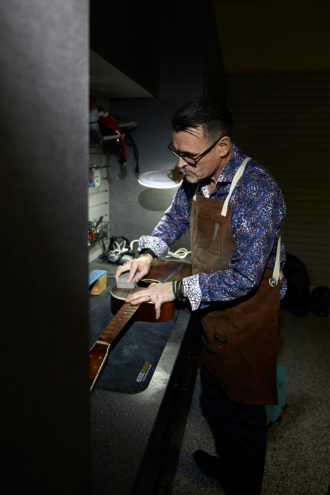 In addition to playing guitars, Boyle taught himself to build and restore them.
Hoyoung Lee

About two years ago, his daughter who is now 20, told her dad: “You need a new hobby. Something new to think about.” So, Boyle got online and found a company that sells new guitars in thousands of pieces—like buying a guitar from Ikea—and taught himself how to put the instrument together.

Music has always been a way for Boyle to escape. His newfound passion for building and restoring guitars is another way to help blow off steam. “We have a company of 600 people at TracyLocke, and there is a lot of pressure that goes along with that,” he says. “Some people go home and chop vegetables.”

Boyle’s first guitar restoration also led to a bonding moment for him and his son, who grew up playing the flute. Boyle went on eBay to look for a project he could pass down to his son, and found an old, weathered guitar made in the 1920s. It wasn’t until the instrument arrived that he realized how perfect it was. The case it was housed in was adorned with stamps from Sweden, Switzerland, and other global destinations. “Obviously, [the previous owner] traveled the world and played it,” Boyle says. “I thought it was the dopest thing.”

When Boyle began to take apart the guitar to restore it, he noticed all of the wear revealed the musician mostly played at D’s, A’s, and E’s—chords that are commonly used in old hillbilly blues genres. “Just looking at this guy’s indentations in his guitar, you can almost hear what he played—and I love that,” Boyle says.