“It’s not exactly something I would call a passion,” warns Jim Von Ehr, founder and CEO of Zyvex Labs, a Richardson-based nanotechnology company. “It’s just an interesting thing I decided to learn to play.”

That “interesting thing” is the didgeridoo. Von Ehr owns three; one might call it a collection. In 1997, Von Ehr and his wife were visiting Sydney when they encountered people playing the Australian instrument along a waterfront. Intrigued, Von Ehr talked with the musicians. One of the didgeridoo players, on a burst of trust and willingness to share, urged Von Ehr to give it a try.

“Of course, I couldn’t get any sound out of it,” Von Ehr recalls. It did, however, spark his interest in learning more. He found a store in Sydney that sold them. “I picked one out, and the people in the store gave me some tips. So, I have a total of probably 15 minutes of instruction in my life on the thing,” Von Ehr says. He brought his newly acquired didgeridoo back to the U.S., bought a second one on a subsequent trip to Australia in 2005, and a third later on in Richardson.

“I wouldn’t call myself skilled. I’d be embarrassed to say I’m any good at all on this instrument, but I can make the right sort of sounds,” Von Ehr says. The CEO has a CD of a didgeridoo master who can play an hour without pause. Von Ehr estimates he can play continuously for about a minute.

“I’ve got some friends who tried to play it, and it’s not an easy instrument,” Von Ehr says. “Nobody’s really gotten the right sound out of it. It takes some work to actually make it sound right.”

The didgeridoo is a welcome challenge for the musically inclined Von Ehr. He played baritone in his high school band and brought a guitar with him when he moved to Texas from Michigan in 1973. A year later, he began recording music with a four-track tape machine. Today, he has a home studio with guitars, synthesizers, and his didgeridoos.

Von Ehr says it has been several years since he’s had the opportunity to spend time in the home studio. He’s been busy divesting one of his companies. The tech exec, who studied computer science at UTD, knows a lot of programmers who are also musicians. He believes that’s because of the way the brain is wired. If you are good at programming, you are likely fine at making music—and vice versa.

“The point of programming, kind of like the point of music, is you have an idea for something. While you’re looking at the whole, you have to reduce it to little parts, and you work on the individual components. And then you put them all together back into the whole,” Von Ehr says. “And it’s the idea of having the big picture and the details simultaneously, meshing the two together so that you get a pleasing outcome.”

Rather than playing the didgeridoo, Von Ehr’s passion may be for the workmanship and capacity it takes to build something. His musicianship rests upon the same belief his work does: a devotion for detail, for the smallest components to amount to something elegant. 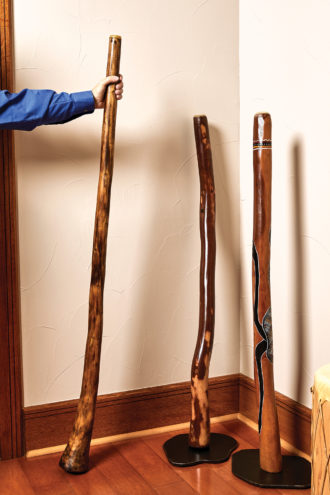 Part of Jim Von Ehr’s collection of didgeridoos, the first of which he acquired while in Sydney, Australia.
Hoyoung Lee

Zyvex Labs is a firm dedicated to detail. The nanotechnology firm works to develop atomically precise manufacturing, accurate to the last atom. “We image the individual layers of atoms, and what our instrument allows us to do is draw with atomic precision,” Von Ehr says. “We’re counting atoms. We’re popping individual atoms off of the surface, depositing other atoms onto the surface.”

Zyvex Labs is developing quantum computers, which Von Ehr calls “the next generation of computers.” For example, quantum computing would allow decryption in record speed, where all possible combinations for a decryption keyword would be simultaneously calculated.

The lab’s computers have pictures of designs accomplished through this method of moving and replacing atoms. Like a minuscule rendering of the University of Oxford coat of arms. A fiery outline of Hello Kitty etched onto an atomic hellscape.

Many scientists see molecular manufacturing as an excursion into the impossible. “The skeptics claimed it would never happen. I still believe it will happen, but it didn’t happen in the time frame that I thought,” Von Ehr says. “The skeptics are right in that it was hard. I think they’re wrong in that they’re saying it’s impossible.”

It is artisanship that concerns him. He wants the best minds working on this. “An ordinary workman-like programmer can get the job done in programming, but it’s an ugly thing,” Von Ehr says. “The best programmers are like composers. The program is almost a symphony in its beauty and its complexity.” Music and science are connected. That, perhaps, is why Von Ehr never has to part with his passion.