The year was 1985, and it was just another day for Dr. Claude Ranoux at the fertility clinic at Cochin Hospital at Paris Descartes University when the power went out. Without generators, the clinic’s numerous embryos, representing thousands of dollars of fertility care—not to mention the hopes and dreams of new families—were in danger.

The embryos needed to stay warm, and Ranoux had to think quickly. Flashlight in hand, he hustled between patients, labs, and incubators through the dark clinic, putting together his plan to preserve the eggs. He loaded eggs into a sealed vial and began asking the women if they would hold the vials with their fertilized eggs inside of their vaginas to keep them warm. Patients obliged, and the improvised incubator combined creative problem-solving and the body’s natural warmth to replicate what had been happening in the lab for years.

What started as a stop-gap measure during a power-outage is now a purposeful alternative for in-vitro fertilization that is cheaper and more natural than traditional IVF, and North Texas is home to the husband-and-wife duo who helped bring the low-tech solution stateside.

Drs. Kevin and Kathy Doody met while training for their OBGYN residencies at Baylor Hospital in Dallas. They both did infertility fellowships at UT Southwestern, married in 1989, and have been practicing together ever since. 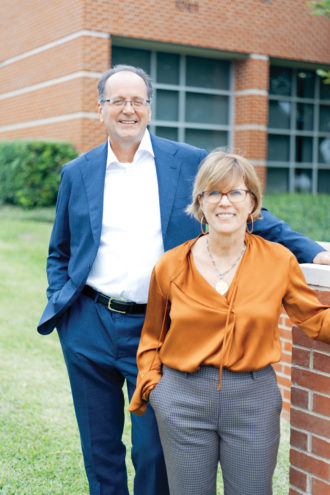 From the beginning, the Doodys wanted to expand opportunities to families who saw IVF as cost-prohibitive. The cost for IVF can range between $10,000 and $20,000 when testing, medicine, removal, and incubation are considered. Although 14 states require that IVF be covered by health insurance policies, Texas is not one of them.

Between 1987 and 2015, more than one million babies were born via IVF and other assisted reproductive technologies in the United States, Penn Medicine finds. But only 24 percent of the nation’s infertile couples have access to the care they need to become pregnant, according to the American Society of Reproductive Medicine. Since 1995, access to infertility services is down 16 percent for women between 25 and 44 years old.

After battling hospital systems to hire staff and invest in the latest fertility technology, the Doodys built their own practice, the Center for Assisted Reproduction in Bedford in 1996, making it the first ambulatory surgery and fertility clinic in the area west of Dallas.

Since the 1990s, IVF success rates have risen from between 13 percent and 15 percent to more than 50 percent. But costs remain high. The Doodys embraced pharmaceutical trials for IVF, which greatly reduced costs for those who participated, but they wanted to find a more consistent way to keep costs low.

In 2013, Kevin was introduced to a rep for a device that was said to cut the cost of IVF without reducing success rates. It had only been tested in Colombia, but Doody was intrigued. Later that year, their clinic piloted the device, called INVOcell. About the size of a wine cork and made of clear polystyrene, the device uses the human body to replace expensive incubators that normally keep the eggs and sperm warm for around a week before doctors check to see which eggs fertilized, placing one in the mother’s uterus.

Fertility doctors combine the eggs and sperm inside the device, which holds them in a sealed sterile cone tucked into an outer shell. It is then inserted into a patient’s vagina, where it is kept for five days or so. The woman’s body provides the proper temperature, pH balance, and oxygen levels that are necessary for fertilization and embryo growth. After the incubation period, the patient returns, the device is removed, and a fertilized egg is placed into the uterus of the prospective mother.

During the trial, the success rate for the device equaled that of traditional IVF for normal responders. In addition, the reduced number of visits, blood work, checks on the embryos and hormone levels, administrative time, and transfers of eggs and sperm, greatly cut costs for the clinic, which then passed the savings along to patients. “There is a lot when you look at it from the business side,” Kevin says. “There is a tremendous business cost that goes with every cycle.”

“There is a lot when you look at it from the business side,” Kevin says. “There is a tremendous business cost that goes with every cycle.”

Not only does the process cut IVF expenses in half (the Doodys say the cost is $6,500), patients have embraced the added level of control they feel over the process. Rather than the eggs sitting in a lab where they fear that something could go wrong or eggs be switched, women are able to keep the eggs with them literally everywhere they go. “You don’t need to look and check for fertilization,” Kevin says. “If you leave it alone, you are good. [Patients] like the fact that the eggs are developing inside them.”

It turns out that the less regulated the process is, the better it might work. Although incubators and labs are designed to keep temperatures constant and minimize variance, the fluctuations in body temperature might be better for the development of the embryo. Just as our natural world depends on cycles of temperature, light, and moisture, the fertilization process responds well to the daily temperature cycles of the body. “We try to create what happens naturally,” Kathy says.

INVOcell was approved by the FDA in 2015, and the Bedford clinic was one of the first to offer the technology. The Doodys began seeing patients from all over the country, as the device reduces the hassle of multiple clinic visits in a short time period. It also allows working women to miss fewer work days and avoid potential awkwardness they may feel for making frequent visits to the doctor. “Women don’t want to advertise their infertility in their workplaces,” Kevin says.

The INVOcell technology went viral when two women used the device to both carry their baby at some point in the pregnancy. Ashleigh and Bliss Coulter told their story of using INVOcell everywhere from WFAA to Good Morning America earlier this year. Eggs were harvested from Bliss, who kept the device with eggs and sperm inside her for the first five days. The fertilized eggs were then transferred to Ashleigh, who gave birth to the couple’s son, Stetson, earlier this year.

In Hawaii, Kathy says, doctors were trained with INVOcell so that they could provide it is an option for women who were due to have their incubation period align with hurricane season. By using the body’s natural warmth and chemistry, INVOcell provided a way to continue the fertilization process even in the face of natural disaster.

Opening Up IVF to More Couples

Today, INVOcell is used by about one-third of the IVF patients at the Doodys’ clinic. But contrary to worries expressed by other clinicians, it has not cannibalized the couple’s traditional IVF practice. The added convenience and reduced cost bring a new customer base into the IVF market that wasn’t present when it required upwards of $15,000—just as mass-produced Fords didn’t kill the more expensive Mercedes, it just allowed a greater number of people to own cars.

“Others might now consider this: Most clinics were going after this one patient population that can afford it, but there is an entire group that is not accessed at all,” Kathy says. “Expand your horizons and open your mind to a different way to do something.”