Politicians like to call it the Texas Miracle. Since 2000, total output of goods and services in the state expanded by nearly 65 percent, outpacing the rest of the country by a large margin. Texas even weathered the Great Recession without suffering much of a downturn. The Dallas-Fort Worth economy has been on the same upward trajectory. It wobbled a bit in the early 2000s, but roared ahead of and after the recession. Overall, it has done just about as well as the state, increasing output by 62 percent since 2000 and opening a large gap between it and the rest of the nation’s metropolitan statistical areas.

Texas and DFW stand out on job creation, too. Both have increased employment by well above 40 percent in the past couple of decades, doubling the pace of the rest of the country.

Can North Texas and the state continue to outpace the nation next year and into the rest of the 2020s? Peering into a crystal ball, we see that risks to future prosperity emerge, in large part from what may happen outside the state—events and trends over which Texans have little say.

Inside the state, it’s hard to find many signs of trouble ahead, particularly for the next year or so. Labor shortages vex some industries, and housing prices are way up in DFW and other energized MSAs, but the highly touted Texas Model still offers a clear path to continuing prosperity. What got us here should help keep us going—at least for 2020. But Texas and DFW can’t sail on sublimely ignoring what dangers lurk outside the state.

Warning signs of impending recession have already flashed. Elsewhere in the world, economic growth has slowed in Asia and Europe. The Brexit time bomb continues to tick toward a disorderly conclusion. President Trump’s wide-ranging trade wars could block Texas manufacturers’ overseas sales and raise prices for key foreign inputs. As for Texas’ Mexico connection, it faces its greatest challenge in four decades with the erosion of support for freer trade in both the United States and Mexico.

The oil and gas industry illustrates the inside/outside dichotomy. Within Texas, producers have seen spectacular success in recent years, sending Texas output to new heights and pushing the nation to the brink of energy independence. From outside the state, however, the oil industry faces three challenges unlikely to go away anytime soon—the low global oil and gas prices brought on by newfound abundance, the declining prices for solar, wind, and other competitive sources of alternative energy, and the growing political clout of anti-fossil fuel forces in the rest of the country and overseas.

The Texas economy is probably strong enough to shake off some potential shocks—just as it did with the 2014 plunge in oil prices. It’s not hard, though, to envision scenarios that would set Texas’ economy reeling. Here’s just one: Trade wars intensify, with tit-for-tat retaliation, throwing the world into recession. If all that happens, Texas probably won’t continue to grow while the rest of the nation suffers—not this time, not with the state’s economy more like the rest of the United States in terms of production and employment.

Right now, the probabilities of these kinds of scenarios are low—but they could rise as stresses build beyond 2020. If recession comes, the recent past suggests the state will probably have a less severe one than the nation as whole.

Explaining the state’s enviable two-decade record of growth and job creation starts with the Texas model of low taxes and small government. The idea is to keep burdens on the economy light, giving markets the fullest possible sway and leaving most decisions on production, investment, work, and innovation to the private sector.

Just about every state crows about its business climate, but the Economic Freedom of North America report, compiled by SMU’s O’Neil Center colleague Dean Stansel, shows where states really stand. In the 2018 report, Texas ranked third among U.S. states in economic freedom, its score a healthy 25 percent above the average for the other states. The gap between Texas and other states has been consistent for nearly four decades. Stansel also tracks economic freedom for MSAs, and the results are as positive for North Texas as they are for the state as a whole. DFW ranks among the leading MSAs in economic freedom, and it has maintained the same decades-long gap of about 25 percent over other urban areas. A high degree of economic freedom spurs growth and faster job creation; that has been well documented by economic studies of states and MSAs.

For Texas, it was also crucial to an epochal transformation—from an oil economy to a more diversified one. When oil ruled Texas’ economy, the state boomed when prices were high and went bust when they were low. The 1980s oil price collapse led to a withering downturn, and oil prices didn’t recover for two decades. In relatively short order, however, something extraordinary happened. Economic growth returned to Texas—and strongly.

Why? Economic freedom. An economy in the doldrums recovers by transferring resources from troubled sectors to more promising ones. Low taxes and small government allowed the private sector to find new opportunities and reap the rewards. At the same time, economic freedom attracted new resources from outside the state, with a steady in-migration of employers and workers. The result was a rapid diversification of the regional and Texas economies. 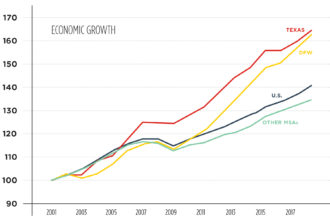 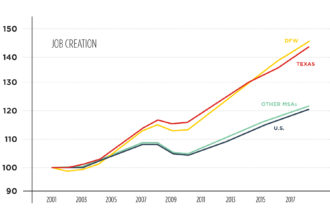 Graeme Montgomery
In the last two decades, Texas and DFW have raced ahead of the pack.

Diverse economies draw strength from a variety of sectors. Some will usually be on the upswing, reducing the drag of those not doing well. Overall, booms may be tamer, but the destructive busts become less likely. The upshot is greater stability and steadier growth.

Texas still has a large oil sector, and it’s healthy right now, but education, professional and business services, healthcare, wholesale trade, construction, and recreational services have also been growing at above average rates, with finance a hair behind. They aren’t overly dependent on the oil business and can continue growing even when prices are low.

For both Texas and DFW, today’s inner economic strength comes from these two concepts: a tradition of economic freedom and four decades of increasing diversity. Neither is in jeopardy, so Texans can expect these advantages to endure.

What’s going on inside the state makes the best case for long-term optimism about Texas and Dallas-Fort Worth. It should be tempered by clouds on the horizon. The most immediate concern centers on a national recession that would bring an end a 10 year-plus growth spurt, the longest in U.S. history.

Going into 2020, national indicators appear largely positive, including modest growth, still-solid job creation, and low inflation. But few expansions die of old age. They’re more likely to end because of some policy blunder—and right now the most likely potential shock might emerge from President Trump’s ongoing trade disputes with China and other countries. Overseas sales have been growing faster for Texas than the nation as a whole for at least the past two decades. The state is the nation’s No. 1 exporter, selling $237 billion overseas in 2018. Trade troubles have already started pinching Texas’ economy. A trade war spiraling out of control could topple the U.S. into recession, and take Texas down with it.

Texas has been expanding business ties with its neighbor to the south since Mexico opened its economy to foreign trade and investment in the 1980s. About 35 percent of the state’s exports now end up in Mexico—just one sign of the country’s importance to Texas. Secure since the North American Free Trade Agreement in 1994, the state’s Mexico connection now looks iffy. Mexico’s new president Andrés Manuel López Obrador doesn’t share his predecessors’ enthusiasm for keeping Mexico open to foreign business. Trump’s hostility to NAFTA has abated in recent months, but the proposed United States-Mexico-Canada Agreement could face a tough ratification fight in a Washington, driven by partisan divisions. Any interruption in business with Mexico (the wall) would be bad news for Texas, but that’s likely an issue beyond 2020.

The local and Texas economies need an expanding labor force to feed growth, and for the past two decades migrants, domestic and foreign, have arrived to fill the jobs. Will they continue to come in sufficient numbers? Construction, hospitality, and other industries are already facing difficulties finding the workers they need to expand their operations. Two reasons to worry that the situation might get worse rather than better: the rising cost of Texas housing and the possibility of more restrictive immigration policies.

In addition to a vibrant economy, one of the MSA’s advantages over the past two decades has been an affordable cost of living, with housing prices a major factor. In the U.S. expansion before the Great Recession, housing prices rose sharply across most of the country—but not in DFW. This time around, local housing prices are rising at a slightly faster pace than the Top 12 MSAs, the Top 100 MSAs and even all other MSAs. If housing costs continues to grow, workers will become less willing to relocate to DFW; without an expanding labor supply, companies already here will expand more slowly and fewer new ones will arrive.

Labor shortages could also worsen because of tightening immigration policies. Texas depends on foreign-born workers for 22 percent of its labor force, compared with 17 percent for the nation. In DFW, the professionals born overseas made up about 20 percent of workers with bachelor’s degrees or higher—also above the national average. Texas needs more of these workers, especially the highly skilled, and Trump’s across-the-board hostility to immigrants threatens to weaken the state’s economy.

Some of the threats to Texas’ economy may not amount to much as events move forward, and others might prove more ominous than they appear today. The election of 2020 might resolve issues like the trade wars, but it might escalate others, such as the likelihood for anti-fossil fuel legislation. None of the risks are immediate, and the Texas and DFW economies are likely to continue growing in 2020, perhaps at a slightly slower pace. The greater risks await in the later years of the decade. It may help to remember that Texas bounced back from the oil debacle of the 1980s and emerged stronger than ever. As long as the state maintains its high economic freedom, it will adapt and find the next opportunity.

W. Michael Cox is founding director of the William J. O’Neil Center for Global Markets and Freedom at Southern Methodist University. Richard Alm is
writer-in-residence at the center.