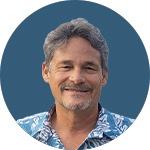 Daniel Cocanougher is always juggling different projects—no two of them the same. He has been well-rounded since childhood, always having a “few too many” interests at once, he says. He took correspondence courses, competed in sports, and participated in the school band. A cousin taught him to play golf, and even as a teen, it was one of his favorite pastimes.

Cocanougher grew up in Wise County. After graduating with a degree in electrical engineering from Rice University, he spent four years at IBM, before going to work at family-owned Cocanougher Feed, where he applied his technical know-how to help automate manufacturing and sales. Shortly thereafter, the family sold the 65-year-old business. “Most people are good at buying things,” Cocanougher says. “It turns out I’m pretty good at selling things.”

On the heels of the sale, Gen Fukunaga, a friend of Cocanougher’s from IBM, reached out with a potential new investment: Dragon Ball Z, a Japanese cartoon that was popular in other parts of the world but hadn’t yet been introduced in the States. Fukunaga’s company, called Funimation Productions, started out syndicating Japanese anime for American audiences, obtaining the English rights for TV shows and then translating, recording, and marketing them.Things really took off when Funimation struck a deal with Cartoon Network in the late 1990s, allowing Dragon Ball Z to be beamed into households all over the country. In 2005, Navarre Corp. purchased the business for $128 million.

Cocanougher had been keeping busy investing with his brother in real estate, primarily in West Texas. In 2017, though, Cocanougher caught wind of what would become his latest endeavor. He learned that The Club at Runaway Bay, an 18-hole golf course on Bridgeport Lake in Wise and Jack counties in North Texas, had fallen into disrepair. Since the 1960s, the golf course cycled through a string of owners. When Cocanougher went to take a look, he found a course that had lost much of its former splendor. “They weren’t watering the fairways and there was dirt on the greens,” he says. “It just looked like they’d almost abandoned it.” After about six months of negotiation with the owners, Cocanougher acquired the course.

He has since replaced the greens, had the sand traps restored, the sprinklers fixed, and the restaurant renovated. He also gave the property a new name—RB Golf Club & Resort—and added a fitness room to the clubhouse. Along with the potential financial returns on his investment, Cocanougher says the renovated course benefits the community and provides a great way for his family to spend time together. There’s still work to be done on the course and for the time being at least, it’s getting much of his attention. But, for an entrepreneur who has invested in everything from Japanese anime to energy, there’s no telling what Cocanougher will be up to next.

Join Volunteers of America in celebrating the trailblazers of women’s golf, including Kathy Whitworth and Suzy Whaley.
By D Partner Studio
Sports

Sunset Golf Center had a personality all its own.
By Tim Rogers
Healthcare

He hasn't denied that it's him.
By Tim Rogers
D Magazine Directories