What a College-Educated Workforce Means for Dallas

Dallas-Fort Worth ranks among the most attractive regions for the Knowledge Age's key resource.
August 7, 2019|2:00 pm

What a College-Educated Workforce Means for Dallas

Over the years, the connection between work and education has evolved, as our economy did. When farming dominated, Americans had little need for schooling because muscle power was enough to earn a living. As the country industrialized, factory hands didn’t need much education because operating machinery depended mainly on manual dexterity and motor skills. The transition to a services economy shifted jobs toward formulaic intelligence and analytical reasoning, so employees finally needed some basic education. In today’s knowledge-based economy, where companies want workers with specialized skills, creativity, and more, a college education has become the most valuable asset in the labor market.

That’s certainly true for individuals; on average, finishing a bachelor’s degree delivers a 70 percent premium over a high-school diploma in the United States. And it’s just as true for states and cities competing to attract college-educated workers and the companies that employ them.

In 2018, amazon.com listed an educated workforce as a make-or-break requirement in its ballyhooed search for the best place for a second headquarters. Dallas was among the finalists but lost out to the East Coast. Highly educated labor will be just as important to other companies looking for the best place to do business. For example, Uber, another tech giant, is reportedly looking to diversify operations away from the West Coast’s high cost of living.

We use Census Bureau data to address key questions about Americans with bachelor’s, graduate, and professional degrees: Where are they going? Where are they coming from? And, most important, what factors drive college-educated migration? Our analysis points to the importance of economic freedom and the opportunities it creates.

College-educated Americans are mobile, often in their prime working years, and they prefer to live in places that offer the cultural, entertainment, and recreational amenities that make everyday life a bit richer. So, big cities gain an edge over small ones, and hipster cred gives a handful of big cities cachet.

Like most of us, college graduates don’t just play. They work. In deciding where to live, fun and games often takes a backseat to the pursuit of opportunity. College graduates are more likely to find their way to the fast-growing metropolitan areas that create well-paying jobs and provide fertile ground for business startups.

We can identify those places by looking at economic freedom, which research shows correlates with employment growth, income gains, entrepreneurial activity, and other positive outcomes associated with greater opportunity. For this study, we used the economic-freedom scores developed by our O’Neil Center colleague Dean Stansel, dividing the 25 largest U.S. metropolitan statistical areas (MSAs) into five groups of equal size.

Between 2005 and 2017, five MSAs with the greatest economic freedom, taken together, saw an increase of more than 53 percent in college-educated residents over age 25 (see the chart below). For the Dallas-Fort Worth area, the leader among MSAs in long-term economic freedom, individuals with bachelor’s, professional, and advanced degrees rose from 1.1 million to nearly 1.7 million—up 54 percent. Houston showed a gain of just over 60 percent, but its college-educated population still trailed Dallas’ by more than 22,000 individuals.

In general, the growth of MSA college-educated populations slows as economic freedom declined. Overall, the least-free group had a weighted-average increase of only 32 percent. The bottom quintile includes two megacities celebrated as exciting places to live—Los Angeles and New York. As the nation’s two biggest MSAs, they have huge college-educated populations, but the ranks didn’t grow as fast as they did in the freer MSAs. From 2005 to 2017, gains were only 33 percent in Los Angeles and 30 percent in New York—outcomes that may at least in part reflect the reduced opportunities in places that restrict economic freedom. 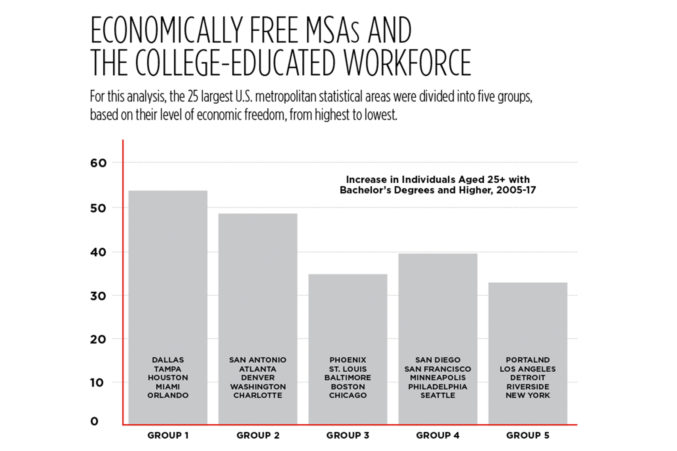 Since 2005, the 25 largest MSAs, taken together, posted a net gain of nearly 10 million in college-educated residents over age 25. Some of them were natives of those MSAs, but most migrated from somewhere else—maybe second- and third-tier cities, or small-town America, or foreign countries.

To get an idea of what’s going on, we looked at the share of each Top-25 MSA’s college-educated population born in another state or abroad. The non-native Texans’ share of residents with bachelor’s, graduate, or professional degrees was just about 61 percent in DFW and Houston. Many MSAs are significantly higher: Washington at 84 percent, Miami and Phoenix at 81 percent; Tampa, Orlando, Atlanta, Portland, and Seattle all at 70 percent or higher.

In five MSAs, those born out of state make up less than 50 percent of the college-educated residents—notably St. Louis at 45 percent and Detroit at 36 percent. San Antonio comes in at 49 percent, well behind DFW and Houston in attracting out-of-state talent.

Getting a large share of educated populations from out of state might signal a supply constraint—that natives aren’t graduating from college in high numbers, perhaps because of underfunded higher education. Or it might be a demand story—the happy result of MSAs with the greatest economic success attracting the broadest possible range of college-educated people, those born in-state and those born elsewhere.

The evidence supports a demand story, with opportunity at its core. Among the 25 largest MSAs, college graduates born out of state made up a weighted-average of 69 percent of the educated populations in the five urban areas with the greatest economic freedom. Moving to the next group, the share jumps above 75 percent, largely because of the anomaly of Washington, D.C., a stateless MSA. Among the 15 MSAs with progressively less economic freedom, non-natives make up between 55 percent and 60 percent of college-educated residents.

MSAs experiencing the fastest growth in their educated populations tend to be the same ones that rely most heavily on college graduates born outside their states. Over the past decades or so, educated Americans have tended to gravitate toward DFW and the other economically free MSAs that offer the best opportunities for successful careers.

Roger Staubach Is Getting a Presidential Medal of Freedom Today

He joins six others, including Elvis, Babe Ruth, and Antonin Scalia.
By  Shawn Shinneman
Business

The head of economic development cited "family health issues" as his reason for departure.
By  Danielle Abril
Galleries