On weekdays, you will typically find Crawford Brock in his office at The Crescent, running day-to-day operations of Stanley Korshak, the Dallas-based luxury retail store he owns. His office is strewn with tennis memorabilia—a signed photo of his favorite player, Jimmy Connors, and even a few club championship trophies. On most Sunday afternoons, though, you’ll likely find Brock on the tennis courts at T Bar M Racquet Club in North Dallas.

In the early afternoon, Brock plays in the men’s doubles league. Then, later in the evening after a brief cool-down and breather, he teams up with his wife, Janet, for the mixed doubles league. “Tennis is such a big part of our lives,” Brock says. “It always has been. Most of our friendships revolve around our tennis friends. Tennis people are fun.” 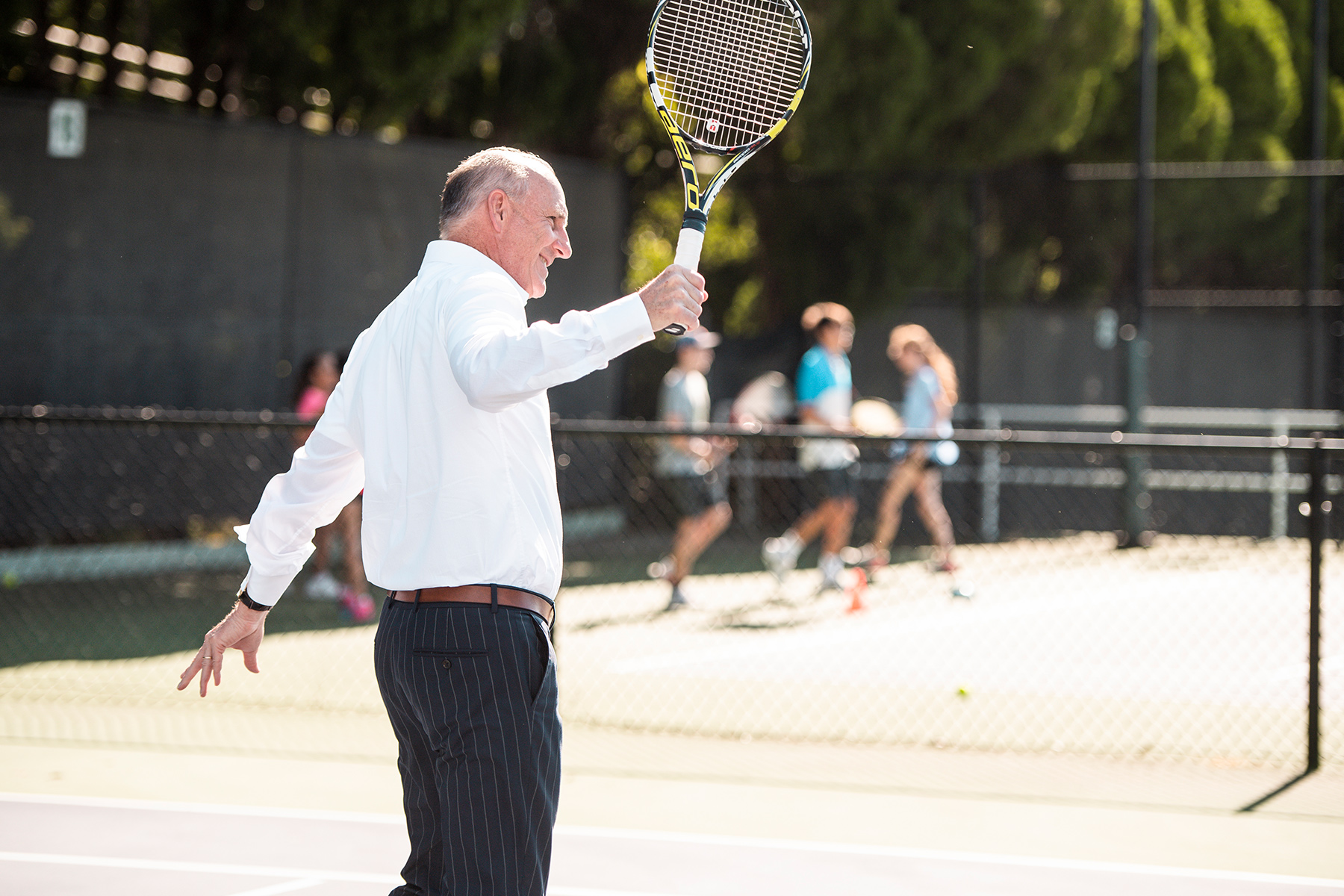 Crawford Brock credits the game of tennis with some of his earliest career successes.
Sean Berry

Brock grew up in the small town of Rome, Georgia, where the long, hot summers of his childhood in the South were punctuated with days full of swimming, golf, and tennis. “I don’t recall exactly when I first picked up a tennis racket,” Brock says. “My parents would just drop us off in the summer at the club. We’d have our swimsuits on. We’d bring our tennis racket and golf clubs, and we stayed out there all day playing tennis and hitting golf balls.”

He met his wife and lifelong mixed doubles partner Janet while in college at Florida State University. He was in the business school. She was a former top-10 junior player and the No. 1 singles and doubles player for the Seminoles’ tennis team.

“In mixed doubles, you typically play the ladies,” Crawford says. “I have a big serve; opponents tend to stay away from me, which is great for us, because my wife is better than I am. She hits the ball really hard. She has great, quick hands. And her net game is flawless.”

Crawford credits the game of tennis with some of his earliest career successes. “When I was buying for Neiman Marcus and we were opening two or three stores a year, my wife and I stayed at the La Jolla Beach and Tennis Club,” Brock says. “Neimans was opening its new store in San Diego. My wife and I got up early one morning, and we were hitting tennis balls down the line.

“I hate losing more than I enjoy winning. I can’t take it. I think I should have done more.”

Phil Miller, who was CEO of Neimans at the time, saw us warming up and said, ‘Hey, Crawford, I see you play tennis. Well, you know my wife and I play. Let’s play tonight after work.’” The Millers and Brocks played that evening—and continued as a foursome for the next four nights. When they got back to Dallas, Miller called Brock into his office and offered him the general manager job for the new Neimans store opening in Beverly Hills. “Tennis did that,” Brock says.

He and his wife went on to make a pretty killer doubles duo on the court in southern California. They were the runners up in the Beverly Hills Open five years in a row. “One year there was a guy and girl off the UCLA tennis team—two 20-somethings in peak physical condition,” he says. “They just crushed us.”

When Crawford was recruited back to Dallas by Caroline Rose Hunt’s Rosewood Corp. to become president and general manager of Stanley Korshak in 1987, part of the allure was the opportunity to work for himself. “I wanted to run my own business. That was my bucket list.” Fifteen years later, Crawford bought the store from Mrs. Hunt. (Brock keeps a signed letter from Neiman’s Phil Miller in his office that says: “I always knew you’d do something really big.”)

Brock credits the mentorship of legendary retailer Stanley Marcus for much of his success. “He moved his office over to The Crescent, and we sat and talked retail for 18 years,” Brock recalls. “We had lunch probably three times a week. I picked his brain about everything. ‘The quality is remembered long after price is forgotten.’ That was an amazing life experience.”

Brock, who named his family boat, TieBreaker, after the sport he loves, says tennis—and business—have helped inspire his lifelong passion for competition. “I hate losing more than I enjoy winning,” he says. “I can’t take it. I think I should have done more. I should have worked harder.”

Sale of the Week